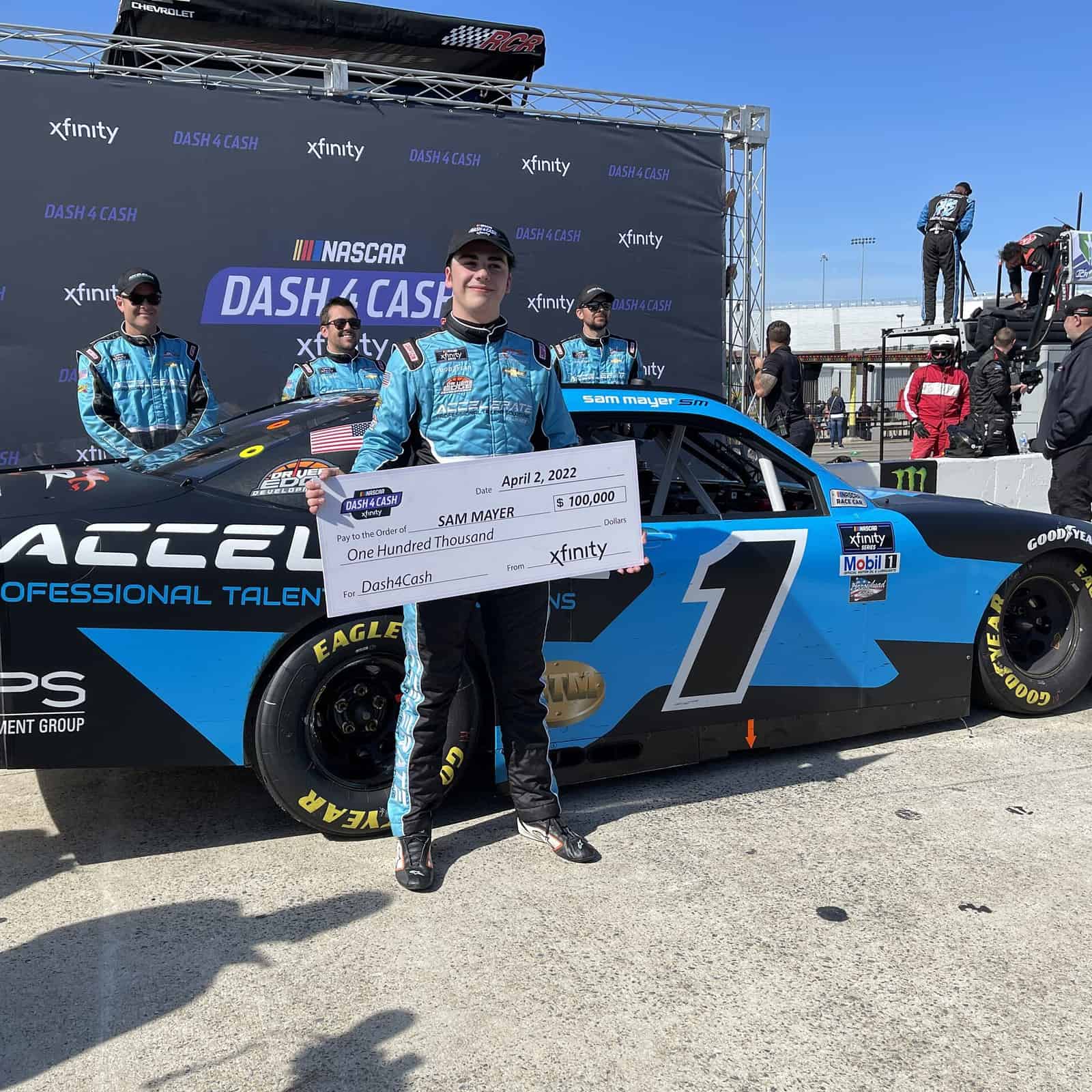 RICHMOND, Va – Saturday (April 2) at Richmond Raceway didn’t just end with Sam Mayer scoring his best career Xfinity Series finish in the ToyotaCare 250. He also walked away with $100,000, represented by an oversized check presented to him and the No. 1 JR Motorsports team after the race.

Mayer’s 24 previous starts, over a partial schedule in 2021 and the beginning of a full-time slate in ’22, had yielded a pair of top-five finishes: one each season. He now has two in the current campaign and Richmond was the site of a career-best third-place effort.

“We had a lot of speed last year when we came to Richmond in the fall,” Mayer said after the checkered flag flew. “We just didn’t get the finish we wanted because tire strategy was way different in the fall because it was hotter and there were more cautions, people were on edge because of the playoffs coming up.”

The No. 1 car methodically worked its way through the field as the afternoon wore on, finishing 10th in the opening stage and seventh in the second. Mayer finished 12th at Richmond last fall, competing in a one-off in BJ McLeod‘s No. 99 while regular team owner Dale Earnhardt Jr. drove the No. 8.

“[That] race played out way differently than today, obviously,” he said. “I don’t think we have but one caution or something like that the whole day, so I mean obviously the racing, people’s mindsets were way different. So it led to more green-flag runs, and that’s exactly where our where our Accelerate Camaro kind of paid off and that long-run speed was unbeatable.

“If we could’ve got to [Nos.] 54 and 18 those last couple laps, I think we would’ve had a shot to go out there and beat them to get the whole win,” he added. “But obviously that Dash 4 Cash stuff is really, really awesome. Bringing home 100 grand for the organization, keeping the streak alive for them, winning it is really cool. And being part of that and having my name on that list is really special as well.”

But what does an 18-year-old do with a check that big?

“I’ve been asked that four or five times,” Mayer said. “Honestly, I’m just gonna put it in my bank account because my dumb ass can’t touch that or bad stuff will happen.”

Mayer’s car seemed to come to him on the long runs more so than the short runs, and he was in prime position to capitalize if leaders Ty Gibbs and John Hunter Nemechek came to blows of sheetmetal.

“Early on, I overdrove it and lost some spots, made a mistake on pit road,” Mayer said. “Pretty much all my mistakes were made the first stage, and then from there got way better and they made the car way better. I was able to get good feedback with getting clean air.

“So that means a lot to have that, to have the team behind me and have the grid, to stand with me after making a couple mistakes early. And obviously learned my lesson to go out there and be kicking butt at the end.”

“I feel, obviously, really confident about that. And on top of that, the team won there with Josh Berry last year, so they had tons of experience there and had a really good experience there. So […] they know how to get it done and make it work. I’m excited to go there and race for another win.”