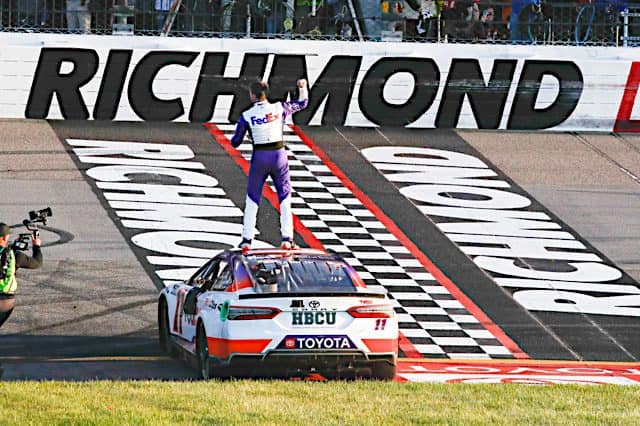 For the fourth time in his NASCAR Cup Series career, Denny Hamlin was victorious at Richmond Raceway. The Chesterfield, Va. native captured the Toyota Owners 400 on Sunday (April 3), utilizing fresh tires in the closing laps to run down the leaders.

Hamlin only led the final five laps of the race, passing William Byron and Martin Truex Jr.  Hamlin then held off Kevin Harvick to win for the 47th time in his Cup career.

It’s Hamlin’s first victory of the season, his first top-10 finish after a rough start and also the first Cup win for Toyota with NASCAR’s new Next Gen chassis.

“Just great strategy there and just drove as hard as I could,” Hamlin told FOX after climbing victoriously out of his No. 11 Toyota. “Just so proud of this whole FedEx Camry team. Man, just never giving up. There was no doubt in my mind, ok maybe just a little, that they got this car right there at the end. Wow, just unbelievable.

“We needed a data point, a good run to balance ourselves for other tracks and I think we got it here.”

One race can change an entire season for a driver. @dennyhamlin shares what this win means to him and his No. 11 team. pic.twitter.com/DXshHbGN5K

Harvick finished second, though his winless streak is now extended to 50 races. The 1-2 finish by drivers over 40 ended a 12-race streak of drivers under 30 winning a Cup Series event.

“Just really proud of everyone on our No. 4 Mobil 1 Ford Mustang for staying in there and having a great strategy,” Harvick said post-race. “It’s really the first clean day we’ve had all year. Cars have been fast. Had a shot there in the end; I wanted to be close enough at the white [flag] to have a swipe at it. Lapped cars there got in the way and I lost a little bit of ground. Still, a great day for us and hopefully some momentum to put us in a positive direction.”

Byron, Truex and Kyle Larson rounded out the top-five finishers. Truex won stage two and appeared to have an advantage for the win as he chased Byron down. However, lapped traffic and Hamlin’s fresher tires ultimately cost Truex the victory.

Martin Truex was just left up to the whims of lapped traffic and he couldn't push any harder on his strategy. pic.twitter.com/eJmf8Rpj2W

Busch recovered to finish ninth after he was black-flagged by NASCAR during the final stage for unapproved tape on his grille. At the time of his penalty, Busch was running sixth.

Polesitter Blaney dominated the first stage. The only yellow flag in it came for Kurt Busch, who stalled his No. 45 23XI Racing Toyota on track. Busch returned to the race to finish 35th.

There were a few cautions in the final stage, but the varying pit strategies brought the top-four finishers all within one second of each other in the closing laps.

What a snooze fest.

Seems like the new car isn’t exactly the savior that the NA$CAR brain trust has been wanting. Not really surprising consideringr the product.

The car is fine. Richmond sucks, it’s always sucked. Watch races from 30 years ago at Richmond; they were just as boring.

Watch Elliott and Kulwicki in the spring race in 1992.

Not arguing with your overall appraisal of races at Richmond. Interesting that FS1 showed a 3 hour version (I am guessing it was edited to fit in that time slot) of the Richmond race from February 1986 last Saturday night and again on Sunday morning. That race was definitely not boring, however Richmond was a ½ mile track back then. The ¾ mile track just doesn’t produce the same results as a ½ miler.

The NA$CAR brain trust ruined Richmond AND Atlanta when they arced the front stretch to get more seats. But 1986 had real race cars and totally different drivers.

When I was at Daytona in 1977 the modifieds had the Permatex 200 and they used the oval instead of the road course. If you think the modifieds looked like they did at Martinsville you would be mistaken. I bought 8 photos of the cars and I found a site on Ebay that is selling them. Check them out at:

If you want to see highlights of all the races that year check out:

I watched the modifieds race the same cars at Pocono on the big track til they changed to the 3/4 mile. They used the front stretch and the pits.

Didn’t they quit running the Modifieds at Daytona because they were faster than the Gran National (Cup) Cars.

Yes! 1977 was the only race on the oval. They went back to the road course.