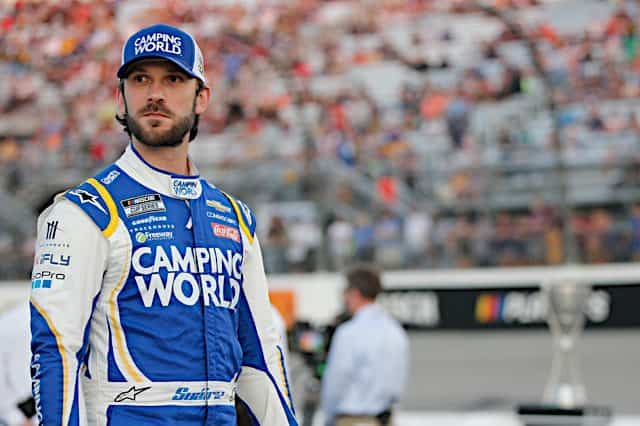 The first points-paying short track race of the 2022 NASCAR Cup Series season was another milestone for the Next Gen racecar. The Toyota Owners 400 at Richmond Raceway (April 3) would be a test of how its new, larger Goodyear tires would wear at speed on the older surface of the three-quarter mile track.

In what has become a characteristic of Richmond over the past few years, long green flag runs created a number of different strategy calls. Daniel Suarez and crew chief Travis Mack took advantage of it in the final stage, giving Suarez much-needed track position inside the top five. Suarez used that to run 16th, the best finish in a relatively quiet day for the underdogs.

A week after Trackhouse Racing Team’s milestone weekend, one in which they saw Ross Chastain earn both his and the organization’s first win at Circuit of the Americas, both drivers sought to forward that momentum at Richmond. Suarez had himself a solid day at COTA, too, pacing the field for 15 laps.

Of the two, Suarez had more of an uphill battle as the Richmond race began. The No. 99 CommScope Chevrolet struggled in dirty air and was stuck mid-pack for the first two stages. That included a heart-stopping moment near Alex Bowman that produced the save of the race.

As has become the norm for Richmond, the final stage usually begins with a caution flag. That’s exactly what happened this go round, followed up by another yellow a few laps later. While the leaders chose to pit on lap 259, Suarez stayed out alongside William Byron to propel him to second. That gave the Monterrey, Mexico native the track position needed to ride in front, remaining inside the top 10 once the race went back green.

With strategy taking center stage after that, Suarez chose to pit only once during the final stretch and struggled with an ill-handling car. Others pit twice and passed by the No. 99 on fresh rubber, eventually dropping him back to 16th by race’s end.

Overall, it was a solid run for the 30-year-old, especially for a race with several long green flag runs. However, Trackhouse is a team that’s hungry for more, and they will certainly not be satisfied until Suarez is holding a race-winning trophy along with Chastain.

The finish leaves Suarez 16th in the playoff standings seven races in. He’s 13 points ahead of Austin Dillon for the final spot.

After his emotional, watermelon-smashing triumph at Circuit of the Americas, Chastain appeared to have the speed to challenge for back-to-back wins. Last time the series visited Richmond, Chastain was with Chip Ganassi Racing and led four laps before finishing seventh. With more momentum and experience, he was ready to improve this spring.

Chastain would put the No. 1 iFly Chevrolet in third position in both stages, earning some valuable bonus points. Stage two set off perhaps the most intense battle for him on track. While running inside the top five, Ryan Blaney gave Chastain a nudge to take the position. As we saw with Chastain at COTA, he was not afraid to return the favor, sending Blaney high into turn 1 the following lap. During the final stage, Blaney would get the last laugh, shoving Chastain out of line for fourth.

While “The Melon Man” had a car capable of running inside the top five all race long, crew chief Phil Surgen made the call to pit Chastain just once in the final 140 laps, giving him nearly 70 laps to run on older tires. The move would not go to their liking, Chastain slipping to 19th at the end and snapping his four-race top-three streak.

Behind the two Trackhouse cars, most of the underdogs did not make a lot of noise. After qualifying fifth, Erik Jones had a relatively quiet but solid effort in the first half of the race. Following a 12th-place stage one finish, Jones went backwards from there, fighting a loose-handling car on entry for a majority of the day. His afternoon got more eventful on lap 246 after sliding into the No. 51 of Cody Ware, sending Ware into Ricky Stenhouse Jr. and hard into the wall. Jones would finish in the 23rd position and now sits 18th in the playoff standings, some 14 points outside the cutline.

Jones’ teammate Ty Dillon also had some drama of his own, making contact with Austin Cindric on lap 257. Cindric would slide off Cole Custer’s nose and inflicted minimal damage on both his car and the No. 42.

Dillon would go on to finish 24th, only his second run outside the top 20 this season.

Two underdogs started the race in a hole before they even took the green flag. Both Justin Haley and Greg Biffle had their cars fail pre-qualifying inspection three times, forcing them to the rear of the field with a pass-through penalty to start the race. At a track like Richmond that goes green for long stretches, losing track position that early proved an impossible hurdle to overcome. Haley would finish in 29th, four laps down, while Biffle would wind up 37th after a suspension issue sent him packing early.

In the NASCAR Xfinity Series, Parker Retzlaff deserves a shoutout. Driving RSS Racing’s No. 38 Ford, Retzlaff made just his second career start in one of NASCAR’s top three levels. Retzlaff ran in the top 10 during points of the race, pulling off a 10th-place finish with a family-based, underfunded team. Keep an eye on this 18-year-old wheelman going forward after two straight top-10 qualifying efforts to begin his NXS career.

AJ Allmendinger (27th): “That was a tough day. The guys did all they could to try to make our No. 16 Action Industries Camaro ZL1 better. I just fought super loose in and burnt the rear tires off it. I wasn’t ever able to get a good balance. We made the best of what we could, it just wasn’t very pretty. Our pit stops were really good – our guys did a great job all day. I just need to be better, so we will keep trying.”

Justin Haley (29th): “We couldn’t catch a break today in our LeafFilter Gutter Protection Camaro ZL1. We bounced back early from our drive-through penalty but struggled with an ill-handling car for the majority of the day. We had a pit road issue on our last green-flag stop, which really sealed our fate for the end. I’m looking forward to getting to Martinsville and putting today behind us.”

Ross Chastain had iFly on the car for his first career win, sporting the colors once again in Richmond. The car was smooth sailing around the track with its beautiful black-and-red design.

Strong showing by both cars at different points throughout the race.

Daniel Suarez catapulted to the top of the doghouse for the first time this season, giving Trackhouse the top spot in five of seven races thus far.

Here are the drivers that have been best in class in each race.

Circuit of the Americas: Ross Chastain

This week, the NASCAR Cup Series stays in the VA Commonwealth for the second of three straight short track races, heading to Martinsville Speedway for the Blue-Emu Maximum Pain Relief 400. Until that race on Saturday night (April 9), treat your blood pressure kindly as it will likely be high for all 400 laps under the lights at the .526-mile oval.

I wouldn’t be surprised at this point if both Saurez and. Chastain get multiple wins this season. On the other hand, the big dogs are learning the new car and pretty soon the usual suspects will be racking up wins. Most likely Blaney, Byron, Truex, and Kyle Busch are sure bets to win a race before the playoffs. Logano, Harvick, and Elliott are solid bets as well. Throw in a couple of unpredictable restrictor plate tracks, and the schedule gets tougher for the underdogs, but it’s been nice to see the parity so far this season. Personally, I’d like to see Reddick get a win.

I’d like to see Reddick rattle Hamlin’s cage at Martinsville to get his win!