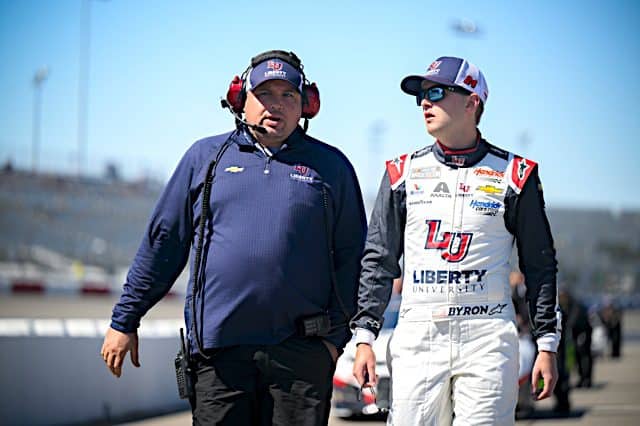 RICHMOND, Va. – Had the Toyota Owners 400 at Richmond Raceway been five laps shorter, William Byron and crew chief Rudy Fugle would have gambled their way to a win.

But with five laps to go on Sunday evening (April 3), Denny Hamlin and Kevin Harvick came flying by the No. 24 Chevrolet to shuffle Byron back to a third-place finish. The reason Hamlin and Harvick were so much faster? Byron had the oldest tires on the racetrack with 90 laps of wear.

Fugle initially elected to pit with the rest of the lead-lap cars who went with a two-stop strategy on the race’s final green-flag run, leaving Byron pitting with 90 laps to go. But instead of pitting that second time, Fugle called an audible and kept Byron on the track the rest of the way. Hamlin and Harvick did pit that second time, giving them the speed needed to run down the No. 24.

“We didn’t think we were good enough to pass cars at the rate we needed to pass cars to catch (Martin Truex Jr.),” Fugle said. “I was surprised that those guys got to our back bumper as well as they did, and I don’t know that our car was strong enough to go through cars like their cars were. That’s what helped us lead to our strategy.”

Despite leading 122 laps, the second-most in the race, Byron wasn’t able to score his second win of the 2022 season. He’s now led over 100 laps in two of the past three races.

“The strategy obviously didn’t work out great,” Byron told Frontstretch. “But I’m happy and proud of the team for being aggressive and trying something.”

The third-place finish was Byron’s third top five of the season. He now sits fourth in the point standings.

Byron started the race on the outside pole and finished stage one in second before fading outside the top 10 in stage two. But after two quick cautions at the start of the final stage, Byron stayed out when everyone in front of him pitted. He held off a faster Truex for the next 51 laps before yielding the lead when he pitted for the final time.

Fugle closely monitored all the data before he made his call to abort the second stop.

“Between 45-40 laps to go, your time has come,” Fugle told Frontstretch. “At that point in time, you don’t have enough time to make up the time you lost. With 30 to go, it’s too late, and with 20 to go, it’s definitely too late. And we know that, we’re watching it every lap and what the projections are gonna be. So I decided to make the decision I made.”

While Fugle weighed all the different factors in his choice, Byron solely focused on driving the car. He told Frontstretch he didn’t know whether the plan the whole time was to pit once or twice.

“I don’t know, I just drive and try to make the best lap time that I can,” Byron said. “Yeah, I thought we did a good job making a good lap time, and then obviously at the end we really fell off and those two guys came with fresher tires.”

But their bed was made after Fugle’s call, and Byron had to slowly pace around the track as the rest of the field tried to catch back up to him.

“Nothing you can do,” Byron said. “Just try to keep the tires under it. As soon as you start to rush things, you go slower. It’s a tough place because of that, so you’ve got to stay under the tires.”

Byron was able to hold off Truex again, who seemed to be his biggest threat. But Hamlin and Harvick seemingly came out of nowhere to catch the No. 24.

“It felt pretty good to (Truex), obviously we were able to beat him,” Fugle said. “It’s those guys [Hamlin and Harvick], I was hoping those other guys would hold them up a little better than they did, and they didn’t. That’s racing. That’s what made today exciting. Wore-out racetracks, sometimes you don’t have super restarts and there’s a lot of other action, but there’s the strategy and different things going on.”