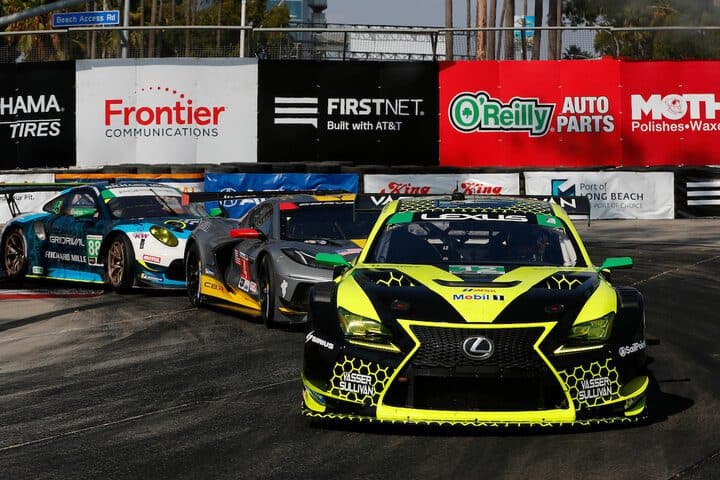 For IMSA WeatherTech SportsCar Championship teams, a return to Long Beach marks the beginning of the sprint race season.  26 teams will do battle on the 1.968-mile street course in Downtown Long Beach Saturday afternoon.  This race will include the DPi, GTD Pro and GTD classes only.

In the DPi class, there are the six full-time teams entered.  The general opinion is that the Cadillac teams are the teams to watch this weekend.  Why?  It’s due to the fact that Long Beach is a street course.  The Acura ARX-05 (based on the ORECA 07) prefers smoother race tracks and a street course is anything but.

Among the six DPi teams entered, there are no driver changes from Sebring other than the fact that the endurance drivers are out.

In GTD Pro, there are only six teams entered.  Likely the biggest change here is that WeatherTech Racing is down to one car, and that one car is a Mercedes.  This is a move that WeatherTech Racing announced back on March 29.  Cooper MacNeil will remain in the No. 79 this weekend (he drove both the Nos. 79 and 97 at Daytona and Sebring).  He’ll be joined by Raffaele Marciello, one of the most successful GT3 racers in the world over the past five years.  Marciello has finished in the top three in points in Fanatec GT World Challenge Europe Powered by AWS Sprint Cup for the last four years in a row, winning the title in 2018.

BMW M Team RLL is also down to one entry, the No. 25 BMW M4 GT3 for John Edwards and Connor de Phillippi.  The team has cut back to one car in order to focus on the development of their new BMW M LMDh that will debut in 2023.

In addition to the WeatherTech No. 97 and the BMW No. 24, TR3 Racing’s No. 63 Lamborghini, the Racers Edge Motorsports Acura and Risi Competizione’s Ferrari are not entered.  They are joined by Corvette Racing’s No. 4, which has been converted back to GTE-spec and is in Europe for the FIA World Endurance Championship season.

For GTD teams, Saturday marks the first race of the WeatherTech Sprint Cup, the championship-within-a-championship that covers the sprint races.  There are 15 teams entered.

Rick Ware Racing is back in the series for the first time since last year’s Rolex 24 at Daytona, where they fielded a Ligier JS P217-Gibson in the LMP2 class in association with Eurasia Motorsport.  This time, they have an Acura NSX GT3 Evo22 that will be shared by Ryan Eversley and Aidan Read.  Eversley comes to the team from IMSA Michelin Pilot Challenge, although he did drive for the team in the NASCAR Cup Series Jockey Made in America 250 at Road America last July.  Read is an engineer by trade who previously drove in the endurance races for Turner Motorsport.

Maxime Martin slides over to the No. 27 at The Heart of Racing alongside Roman DeAngelis after driving the No. 23 at both Daytona and Sebring.  Also, there has been a team name change.  Gilbert/Korthoff Motorsports is now simply known as Team Korthoff Motorsports.

At Inception Motorsports, Frederik Schandorff returns to the team in place of Ollie Millroy.  Schandorff was brought in as a last-minute replacement last November for the Motul Petit Le Mans at Michelin Raceway Road Atlanta and impressed with the team before they were eliminated in a restart crash.

Finally, Gradient Racing has expanded their schedule for 2022 to include Long Beach (the team had previously only confirmed their participation in the Michelin Endurance Cup events).  Mario Farnbacher will be joined by Marc Miller, who was only scheduled to race at Daytona.  The team will also have sponsorship from Acura via “Chiaki’s Journey,” a series of four anime commercials designed to promote the Type-S line of high performance cars.  Here’s the first part: