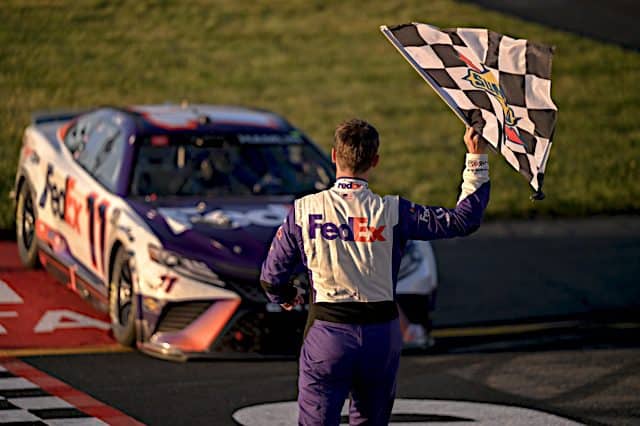 Who… should you be talking about after the Toyota Owners 400?

Denny Hamlin only led five laps at Richmond Raceway Sunday (April 3), but they were the final five. That propelled him to the win, his first of the season in the Toyota Owners 400. Hamlin was solid all day but hadn’t shown the kind of speed needed to push his way through traffic to the lead. He came on strong on the final run, passing teammate and stage two winner Martin Truex Jr. before running down leader William Byron and holding off a hard-charging Kevin Harvick to take the victory.

Hamlin entered the weekend a dismal 22nd in points, and the race was the first real show of strength from Joe Gibbs Racing as an organization in 2022. He moved up to 20th after the race, now just 10 points outside the top 16. Hamlin’s the seventh winner in seven races this year, and that’s a trend that everyone watching should root for to continue.

And don’t forget Austin Dillon. Dillon’s 10th-place finish marks the sixth straight race in which at least one Richard Childress Racing or affiliated team has finished inside the top 10, and it’s often been more than one. Dillon was the lone representative this week, but the RCR and satellite success in 2022 has been marked. Success has come all across the board and at almost every track type. (Petty GMS driver Ty Dillon finished 11th at Daytona, the lone race in which not one RCR/ECR Engines ally scored a top-10 finish).

Of the teams that have alliances with RCR or run ECR power (RCR, Trackhouse Racing Team, Petty GMS, Kaulig Racing) everyone has also scored at least one top 10 this year while RCR and Trackhouse have done so with all their drivers. RCR might not be quite at the level of its glory days, when Dale Earnhardt ruled, but it’s certainly enjoying success in 2022.

It’s been all about the youth movement lately. The oldest winner entering the weekend had been Kyle Larson, who turns 30 this summer. While the veterans claimed one this week at Richmond with Hamlin, the younger drivers still held their own, with five of the top-10 finishers in the under-30 crowd.

And it’s not just new drivers, but teams. Trackhouse’s second-year program, which took its first win at COTA, continues to thrive and compete well against the established organizations.

It’s a natural turnover; once upon a time, the veterans were the fresh-faced newcomers. As the sun sets on their careers, a new generation of stars will rise.

Where… did the other key players wind up after the Toyota Owners 400?

Polesitter Ryan Blaney dominated early, but couldn’t quite keep up with the track later in the day. After leading 128 laps to start the day, Blaney faded to seventh at the end.

Defending race winner Alex Bowman qualified just 28th, meaning a repeat looked unlikely. Though he did race his way into the top 15, Bowman never looked like much of a factor and suffered through a penalty after pitting outside his box. As the race wore on, luck and strategy gave him a boost, and Bowman was able to work his way forward late, finishing eighth.

Defending Cup champ Kyle Larson scored a couple of points in stage two, but like Bowman, his team found its speed late in the race. Larson had a fast Chevrolet during the closing laps, and while he didn’t have anything for the win, he finished fifth, a pick-me-up after struggling for the last few weeks.

Active Richmond win leader Kyle Busch grabbed points in both stages and looked like he could run with Hamlin and Truex until NASCAR hit him with a penalty. Busch’s crew put tape on the grille of his Toyota in an area where that’s not allowed and Busch was forced to serve a stop-and-go penalty. While he did race his way back onto the lead lap, finishing ninth, the two-time Cup champion ran out of time to get back in the running.

When… was the moment of truth in the Toyota Owners 400?

Richmond doesn’t really race like the other short tracks on the Cup schedule. It often produces racing and strategy similar to bigger tracks, and Sunday’s race came down to strategy more than tight-quarters competition. Hamlin’s team gambled on track position to pit for tires as late as possible, and it worked, as he was able to run down Truex and Byron on older rubber. Harvick sailed past the pair as well on the same late tire call.

While we’ve seen some beating and banging at Richmond, it’s not generally at the same level as Bristol or Martinsville, where the chrome horn and the bump-and-run are common and often integral to a driver’s finish. That leaves it with a different style of racing and arguably less popular than the other two short tracks on the Cup schedule.

The short track tour rolls on with the series’ first of two visits to Martinsville Speedway for a Saturday night date under the lights. The race has been shortened to 400 laps instead of the traditional 500.  That’s not the move fans should want to see because the price of a ticket now includes a lot less racing.

It further illustrates a growing trend in NASCAR, one in which the television networks are calling too many of the shots. Sure, more fans watch on TV than in person each week, but the terrible start times and shortened races, which the networks insist upon, are detrimental to the sport in the long run.

TV coverage should make fans want to go see a race in person. Races in person are always better than what’s seen on TV because of a fan’s perspective in the stands that covers the entire track. When you’re there, the eye can be drawn to wherever “the viewer” wants. On TV, the eye is limited to what the camera shows, and too often, that’s one or two cars, even if they aren’t doing much in the way of racing. Meanwhile, the real action is ignored, and on top of that, an afternoon race runs into the dinner hour on the east coast where the teams’ families live.

TV pays the bills for NASCAR, but at some point, the sanctioning body has to weigh the consequences of the current coverage, because it’s not going to bring new fans to the track. Especially if they’re getting less for their money….

How… many drivers will make the playoffs on points this year?

In 2021, just three drivers made the postseason without a win prior to the cutoff race. The series saw seven different winners through the first seven races, with the first repeat coming in week eight last season. 2022 has kicked off in much the same way as Hamlin was winner number seven on the year, and it’s been anyone’s game just about every week.

That means that while consistency is still important (it’s what leads to victories) winning is going to be paramount to being included in the title hunt this year. As late as midsummer, there were plausible 2021 scenarios that would have a race winner miss the cut. While that proved not to be the case, there’s not going to be much wiggle room in 2022, either. This year’s field is deeper than last, thanks to the parity the new car has brought, and as long as that continues, even single race winners could feel the heat when we get to the Dog Days of August.

I’m glad someone mentioned the event going through supper time on the East Coast. That doesn’t happen for the West Coast events.