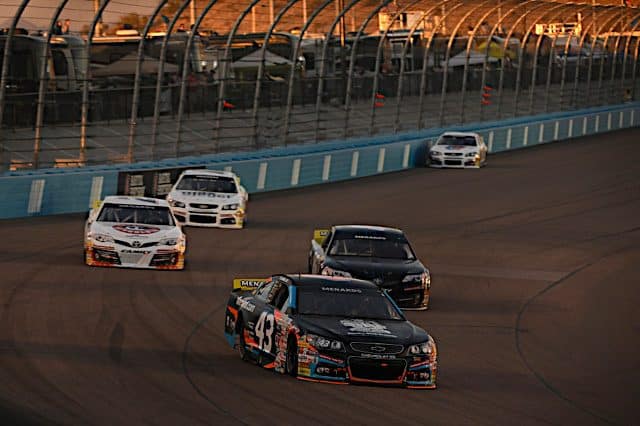 The ARCA Menards Series has its longest break this year with more than a month off between its second and third races this season.

With 18 races remaining in 2022, there are unlimited possibilities for what could happen by the time the checkered flag flies to end the ARCA season at Toledo Speedway.

Nevertheless, with some ARCA TV coverage on FOX Sports 1 this year, what are the Larry McReynolds trends of the season before the series heads to Talladega Superspeedway?

36.4% of the NASCAR Xfinity Series and NASCAR Camping World Truck Series races this year have been won by the top two finishers in the ARCA points last year, Ty Gibbs and Corey Heim.

Gibbs has won three times this Xfinity season, giving him seven wins in 25 career Xfinity starts. He leads the series with wins this year, though he notched his most recent one at Richmond Raceway by moving teammate John Hunter Nemechek.

Meanwhile, Heim won the Truck race at Atlanta Motor Speedway in only his fifth career Truck start. Only competing part-time this year, Heim is tasked with the lion’s share of driving the No. 51 Kyle Busch Motorsports Toyota. While he will not win the drivers’ championship, Heim certainly can help the team win the owners’ title.

The ARCA youth movement is fully on display as it has been 23 races since a driver at least 30 years old won an ARCA race. Ryan Unzicker was the last one when he cruised to his first ARCA victory in 2020 at the dirt track Illinois State Fairgrounds.

Of the full-time competitors this year, Greg Van Alst and Brad Smith are the only two older than 30. Van Alst has both the equipment and the drive to win this year.

Smith, on the other hand, will not win this year. The 53-year-old only has one top 10 in his long ARCA career, though he is 13 starts away from 400, an impressive accomplishment, nevertheless.

Andy Jankowiak is likely the only other contending driver over age 30. He has five top 10s in eight ARCA starts.

See also
Who Will Become the Next ARCA 1st-Time Winner?

Seventeen teams have competed in both ARCA races this season. Not all are fielding one driver per entry, such as Fast Track Racing’s varying driver lineup, but it is a welcome sign for this series when it has struggled with car counts the past few years.

Of those 17 full-time teams, some drivers are trying to turn their slates into full-time campaigns. Zachary Tinkle is attempting to fund his effort through NFTs and Fast Track team owner Andy Hillenburg told Frontstretch that D.L. Wilson is attempting to secure funding to run the full ARCA season.

Eleven points separate second-place Rajah Caruth from points leader Daniel Dye. Combined these drivers have only one combined ARCA victory when Dye dominated last year at Berlin Raceway. For these two up-and-coming drivers, it is a promising sign.

Dye drives for GMS Racing, which condensed down to two full-time NASCAR Camping World Truck Series entries this year. But the organization partnered with NASCAR Hall of Fame owner Richard Petty to form Petty GMS Motorsports in the NASCAR Cup Series this year.

Caruth is running part-time in the NASCAR Xfinity Series this year with Alpha Prime Racing and continues his development driving for Rev Racing in ARCA. Caruth has not won an ARCA event yet, but he has learned rapidly. In 17 races under the ARCA banner, he has five top fives and 12 top-10 finishes.

Caruth also is gaining experience beyond ARCA this year too. He is running part-time in Xfinity with Alpha Prime, and he finished 24th in his series debut at Richmond Raceway. Moreover, he made team co-owner Tommy Joe Martins happy.

Toyota has dominated ARCA races at Talladega, winning the last five straight. Additionally, that manufacturer has seen its drivers win six out of the last 10 ARCA races at the 2.66-mile superspeedway.

The other Toyota contender at Talladega will be Drew Dollar piloting the No. 18 Kyle Busch Motorsports Toyota. Dollar won at Talladega in 2020, so he knows how to win there.

For the rest of the ARCA field, teamwork will be paramount as the drivers seek to best the Venturini superspeedway prowess. Superspeedway races equalize the field, as several drivers had solid races at Daytona this year. Can they better their finishing positions to win?

One of the things I really like about @ARCA_Racing is smaller, independent teams can still come and compete. Great runs today for @seancorr82_8_48 @AndyJankowiak and @TimRichmond27. Feeling immense pride for all of them they ran so well today.

There will be an hour-long group practice session for ARCA drivers before they race at Talladega. With the starting lineup set by 2021 owners’ points, thus no qualifying, that practice time will be crucial for teams to best set up their cars for the 76-lap race.

The ARCA race at Talladega will take place on Saturday, April 23 at 1 p.m. ET with TV coverage provided by FOX Sports 1.

Frontstretch previously reported that Caruth would run full-time in 2023 for Alpha Prime Racing. In actuality, Caruth has not signed anything for next year. This has been corrected and Frontstretch apologizes for the error.