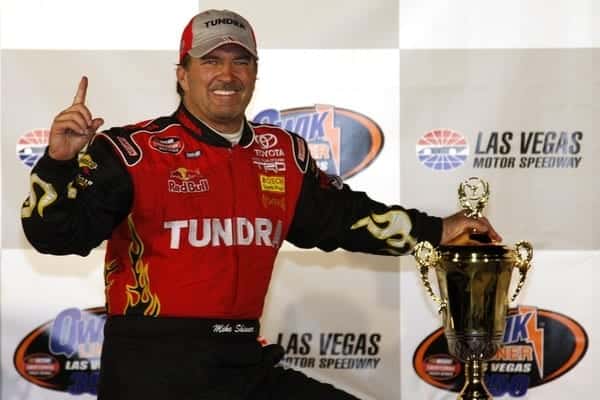 Earlier this week, NASCAR revealed the latest nominees for the 2023 NASCAR Hall of Fame class. Of course, each time the ballot comes out, it’s a source for discussion about what qualifications should be required for a driver to enter, and it typically turns into listing drivers who may not be on the ballot but should be.

Interestingly enough, the NASCAR Camping World Truck Series is represented by just one driver — Ron Hornaday Jr. — who was inducted in 2018. As the only four-time champion in the series, he’s obviously a no-brainer. At the time, Hornaday led nearly every statistical category in the Truck Series with 51 wins, 158 top fives and 234 top 10s over a 17-year-long career that began with the inaugural season in 1995.

There are definitely several other drivers, both past and present, that would be great representatives of the series if they were given their own spot in the Hall of Fame.

Like Hornaday, Skinner was an integral part of the Truck Series’ inaugural season and he made sure everyone knew he was there, too. Winning 10 poles and eight races during that first 20-race schedule, Skinner boasted an impressive 4.8 average finish en route to becoming the series’ first champion. That 1995 season was also the year Skinner won a record four races from the pole, a feat that’s only been matched once since (Kyle Busch – 2010).

The following year when the schedule expanded to 24 events, he again won eight races, this time snagging 20 top 10s, 17 top fives and an average finish of 5.1. That time around, he came up 53 points short of the championship to none other than Hornaday.

After a stint in the NASCAR Cup Series, Skinner returned to the Truck Series full-time again in 2004 but went winless that season. By 2007, he scored five wins and nearly won the championship. Skinner spent 19 weeks atop the standings and even headed into the season finale at Homestead-Miami Speedway with a 29-point lead over Hornaday. But a 35th-place finish, combined with a seventh for Hornaday was enough to swing the championship the other direction and Skinner came up more than 50 points short of the title.

He remained full-time in the Truck Series through the end of the 2010 season when he finished eighth in the standings.

All told, Skinner posted 28 wins, 90 top fives, 144 top 10s and a record 50 poles in 231 career starts. While it’s certainly not the winningest record in the series, his impact, especially in those first two seasons, is reason enough to add his name to the Hall of Fame.

Earlier this year, Todd Bodine stole headlines as he made a successful bid to return to the Truck Series to run six more races and bring his career starts total to 800 across the Truck, Xfinity and Cup series with the help of sponsorship from Marcus Lemonis.

But with or without those final six races, one of which already came at Las Vegas Motor Speedway earlier this season, Bodine deserves his own spot inside the Hall of Fame.

The two-time champion may only have 22 wins across 221 starts to go along with 92 top fives and 124 top 10s, but a multiple title winner in any series is worth taking a closer look at.

Bodine made his Truck Series debut during the inaugural season in 1995 but ran just five races, all of which ended in a top 10, including a best finish of fourth at Heartland Park in Topeka, Kansas. But it wasn’t until 2005 that he joined the series full-time.

From 2005 through 2010, Bodine posted multiple wins each season and won the championship twice. In fact, 19 of his 22 career victories came during that timeframe.

But perhaps what stands out the most is the 2010 season when he ran largely unsponsored for Germain Racing. He started off the year with a runner-up finish at Daytona International Speedway and ended up with just one DNF (overheating at Martinsville Speedway) through 25 races.

In a season where he scored four wins, 17 top fives and 20 top 10s, Bodine actually clinched the championship a week early following a 12th-place finish at Phoenix Raceway. That same year he posted a career-high 6.4 average finish.

While I’m not yet convinced any of Bodine’s remaining five Truck Series starts this season will amount to much more than some excitement for hitting a career milestone, he’s already done his part to cement his home in the Hall of Fame.

See also
Here Are the Changes to the Martinsville Entry Lists

Eligibility aside, once he does decide to hang up his helmet, Matt Crafton is definitely a driver whose name belongs in the Hall of Fame. Sure, it wasn’t until his eighth full-time season that he finally found victory lane, but since then he’s won 15 times, including a six-victory season in 2015. Interestingly enough, he didn’t end up winning the championship that year and instead ended up third behind Erik Jones and Tyler Reddick.

During his first championship-winning season, he won just a single race but consistency was the key to his success. After opening the year with a ninth-place finish at Daytona, he sat eighth in the standings but results of second, sixth and first in the next three races at Martinsville, Rockingham Speedway and Kansas Speedway put gave him the points lead, something he never relinquished through the remainder of the year. During that season, he scored seven top fives and 19 top 10s in 22 races.

The following season meant much of the same for Crafton, though this time, he swapped the points lead for a good portion of the year with teammate Johnny Sauter. But when all was said and done, he’d led the standings for the final eight weeks of the year to become the Truck Series’ first back-to-back champion. This time around, he did it with two wins, 13 top fives, 17 top 10s and a seventh-place average finish in 22 races.

Some may criticize Crafton for spending the majority of his career in the Truck Series and never opting to make the jump to Xfinity or Cup, other than for a handful of events (six combined across both series), but the reality is he’s remained in the Truck Series by choice.

During a 2013 interview, Crafton made it clear that his ultimate desire was to run Cup races and have a shot at winning there. But he also explained “I could probably go run 30th in a Cup race and make more than I do in a Truck race, but if you’re out here to run 30th, you shouldn’t be running.

“I’m out here to win races and do what I love to do, all while running up front.”

That’s an absolutely respectable decision and is on par with what others have done more recently (see John Hunter Nemechek). And that decision is also what ultimately led to winning his third championship.

Say what you will about the 2019 season when Crafton won the championship without winning a single race, but you’ve got to admit it’s a bit impressive that he put himself in the position to capitalize and take his third title. Of course, a lot of that is thanks to plenty of consistency throughout the season. He posted 18 top 10s in 23 races, including 11 of them in the first 12 races and a runner-up finish in the season finale.

Simply put, Crafton’s, consistency, longevity and three championships, along with his loyalty to team owners Duke and Rhonda Thorson put him up there as one of the greats to run in the Truck Series.

He may be a driver fans love to hate, but there’s no denying Kyle Busch‘s contributions to the Truck Series. As a driver, Busch has made 162 starts and has accumulated 61 wins, 109 top fives, 130 top 10s and an impressive 6.6 career average finish. That’s an impressive 38% winning rate and 80% of his starts have ended in a top 10, and there’s no doubt in my mind that if he’d ever run full-time in the series, he definitely would have won a championship.

Busch made his first six starts in 2001 at the ripe young age of 16, and the following year, NASCAR raised the minimum age to race from 16 to 18 and he was sidelined until 2004 when he made a single start at O’Reilly Raceway Park.

For the 2005 season, Busch began racing for Billy Ballew Motorsports and continued to do so through the conclusion of 2009. In that timeframe, he ran a total of 62 races and won 16 of them, including five straight during his final year with the team.

Since then, he’s competed exclusively behind the wheel of Kyle Busch Motorsports equipment for a team Noah Gragson once called a “household name.”

Take out the driver and Busch’s contributions as an owner are just as impressive. From contractor complaints about payments to odd sponsorship situations (see: Justin Boston and Zloop), KBM was built from the ground up after purchasing equipment from the now-defunct Xpress Motorsports and has turned itself into a championship-winning organization.

KBM made its debut in 2010 and has worked its way through contractor accusations and sponsorship issues to bring several drivers through its ranks who have started working their way to NASCAR stardom: Erik Jones, William Byron, Bubba Wallace, Daniel Suarez, Christopher Bell and Gragson. And now, for the second year in a row he’s got Nemechek, who won five races last season. Additionally, Chandler Smith and Corey Heim each already have a victory this season.

Of course, all of that doesn’t even include his Cup and Xfinity series accolades, but in this case, Busch doesn’t necessarily even need those to cement his spot in the Hall of Fame.

No Jack Sprague? Seriously? It was either him or Hornaday in the late 90s back and forth. He is one of the best to drive a truck!

Silly to include Kyle Busch in the conversation because he is no doubt a first ballot inductee once he hangs up the helmet for his accomplishments in Cup. His truck series statistics will be a footnote to his overall stats.

is jack sprague in hof? i know hornaday is. use to be awesome watching sprague, skinner and hornaday fight it out for race win and champonship.

It’s interesting to me that three of these drivers are from California. I thought NASCAR was a southern sport?