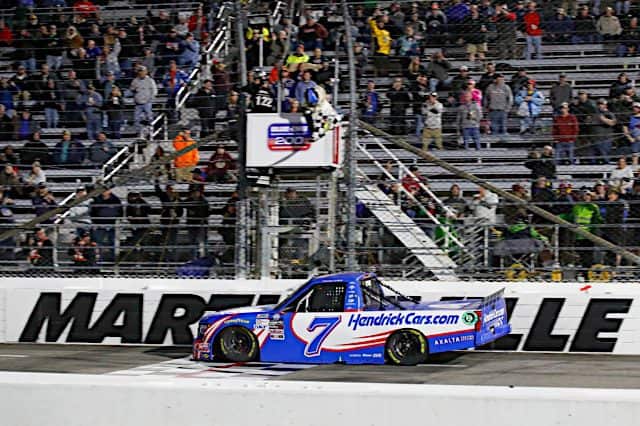 In his return to the NASCAR Camping World Truck Series, 2016 rookie of the year William Byron took off right where he left off.

“It was a lot of fun,” Byron told FOX Sports 1. “Great crowd here at Martinsville. I’ve never won a race at Martinsville and struggled here when I was in late models. Awesome to get the win tonight.”

The win was the first in the series for Spire Motorsports in just the team’s third start. It previously ran at Daytona International Speedway with Austin Hill and Circuit of the Americas with Alex Bowman.

“Thanks to Spire, all the guys back at their shop,” Byron said. “They don’t have a lot of guys, but they do it right, obviously. It was fun to work with Bono [Manion], have a little help from Rudy [Fugle, Byron’s NASCAR Cup Series crew chief]. Obviously, he knows the Trucks really well.

“Thanks to Mr. H [Rick Hendrick] for letting me do it. Cool to get the win in his paint scheme.”

Retweet to congratulate @WilliamByron on his @NASCAR_Trucks WIN at Martinsville!

Johnny Sauter finished runner-up in just his second start of the season and first with longtime team ThorSport Racing. Kyle Busch finished third and only led one lap, the least he’s led in a Truck race since he led zero laps at Charlotte Motor Speedway in 2018. John Hunter Nemechek was the highest finishing full-time driver in fourth, and stage two winner Ben Rhodes rounded out the top five.

Qualifying was rained out for the race, so the lineup was set on points. This put Zane Smith on the pole. Due to their teams only being part time, Byron and Sauter started 32nd and 36th.

Zane Smith led the entirety of the first stage, but lost the lead when he pitted and Rhodes stayed out.

When the caution flag flew for Lawless Alan‘s spin on lap 80, Byron pitted while most of the leaders stayed out. Rhodes hung on for the stage two win, but lost the lead to Byron when he pitted during the stage break. Byron didn’t look back and cruised to the race win.

Rhodes now leads the point standings by four points over Chandler Smith. The Trucks are back in action next Saturday, April 16, at the Bristol Motor Speedway dirt track. FS1 and MRN will have the coverage.