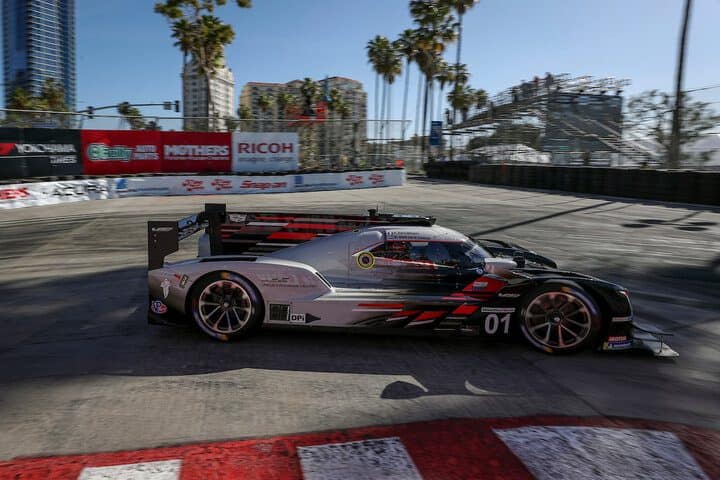 Chip Ganassi Racing’s Sebastien Bourdais was fastest overall Friday (April 8) in practice for the IMSA WeatherTech SportsCar Championship Acura Grand Prix of Long Beach with a lap at 99.908 mph in his Cadillac.  The lap is an unofficial track record for IMSA.

Opening practice for the IMSA WeatherTech SportsCar Championship in Long Beach is always a rather dicey affair.  While it was not the first on-track activity of the weekend, it was still 9:15 a.m. local time when cars first ventured on-course.  With little rubber laid down during the first Porsche Carrera Cup practice earlier in the morning, drivers found the going tough.  The opening minutes saw Vasser Sullivan’s Aaron Telitz and BMW M Team RLL’s Connor de Phillippi miss turn 1 and go into the runoff.

However, the session will be best remembered for the interruptions.  There were four red flag periods in the first hour of practice.  The first occurred 12 minutes in due to oil on the track in turn 6.  Later on, Crucial Motorsport’s Jon Miller spun and crashed in turn 1 to bring out another yellow.  Vasser Sullivan’s Ben Barnicoat and JDC-Miller MotorSports’ Richard Westbrook went off-course without hitting anything and drew red flags after stalling.

Speeds steadily increased as rubber was put down on the 1.968-mile street course.  Over the span of the session, the best time was lowered by three seconds.  While Wayne Taylor Racing’s Filipe Albuquerque was quickest for a time, it was Derani who was fastest in the end with a lap at 97.874 mph.

In the GT ranks, a lot of the fastest laps were set very early in the session.  The BMW M4 GT3 is a rather large GT car, but Turner Motorsport’s Bill Auberlen made it look quite nimble.   Fresh off his induction into the Grand Prix of Long Beach Walk of Fame, Auberlen turned in a lap at 88.681 mph to top all of the GT cars in seventh overall.  Auberlen’s lap was four-tenths of a second faster than Gradient Racing’s Marc Miller.  Vasser Sullivan’s No. 12 Lexus for Frankie Montecalvo was third, followed by HTP Winward Motorsport’s Philip Ellis.  Inception Racing’s Frederik Schandorff was fifth in his McLaren.

In GTD Pro, The Heart of Racing’s Ross Gunn was fastest with a lap at 88.118 mph, 10th overall and fourth of the GT teams.  Gunn’s lap was four-hundredths of a second faster than WeatherTech Racing’s Raffaele Marciello.  PFAFF Motorsports’ Mathieu Jaminet was third fastest in his Porsche, then Barnicoat’s Lexus.  Corvette Racing’s Antonio Garcia was fifth.

In the afternoon practice session, things were still somewhat dicey, but there were no red flags.  That said, there were a number of instances where drivers ended up in one of the runoff areas.  Inception Racing’s Brendan Iribe went off, as did Meyer Shank Racing with Curb-Agajanian’s Oliver Jarvis.  Rick Ware Racing’s No. 51 Acura went off twice during the session, once each for Ryan Eversley and Aidan Read.

Speed-wise, the best laps in the split session come during the final 15 minutes, when only the DPi and GTD Pro cars are allowed on the track.  With less than 10 minutes remaining in the session, Bourdais put himself on top of the chart.  A couple of laps later, Bourdais bettered his time with the best lap for the entire day.

Bourdais’ lap was seven-hundredths of a second faster than teammate Alex Lynn.  Derani completed a Cadillac 1-2-3 in his Whelen Engineering-sponsored No. 31.  Blomqvist was fourth, while Albuquerque was fifth.

In GTD Pro, Jaminet put his flannel Porsche on top with a lap at 89.824 mph, good for seventh overall.  Much like Bourdais in the DPi class, Jaminet’s lap is an unofficial class record for GT3 cars.

Jaminet’s lap was four-hundredths of a second faster than de Phillippi in the sole factory BMW.  Corvette Racing’s Jordan Taylor was third in the Chevrolet, followed by Marciello.  The Heart of Racing’s Alex Riberas was fifth in the No. 23 Aston Martin.

GTD was led by Schandorff in the No. 70 McLaren with a lap at 89.128 mph, 11th overall and fifth of all GT cars  Schandorff was five-hundredths of a second faster than Team Korthoff Motorsports’ Mike Skeen in his Mercedes.  Turner Motorsport’s Robby Foley was third in his BMW, then Madison Snow in the Paul Miller BMW.  The Heart of Racing’s Roman DeAngelis was fifth in the No. 27 Aston Martin.

One team on the entry list will not compete this weekend.  That is the NTe Sport Lamborghini that was scheduled to be shared by Jaden Conwright and Don Yount.  The team’s transporter blew a tire en route to Long Beach in what could have been a very scary incident.  Luckily, no one was hurt.

Sadly, we will not be attending this weekend's @GPLongBeach this weekend. Our rig suffered a blown tire on the way to CA, and though we saved it from crashing, the damage to the rig was too severe and we couldn't receive parts in time. Not to worry, we'll see you soon! pic.twitter.com/VwP1tloHk3

Qualifying for the IMSA WeatherTech SportsCar Championship Acura Grand Prix of Long Beach is scheduled to begin at 8:15 p.m. ET.  The session will be streamed live at IMSA.com and on Peacock (subscription required).