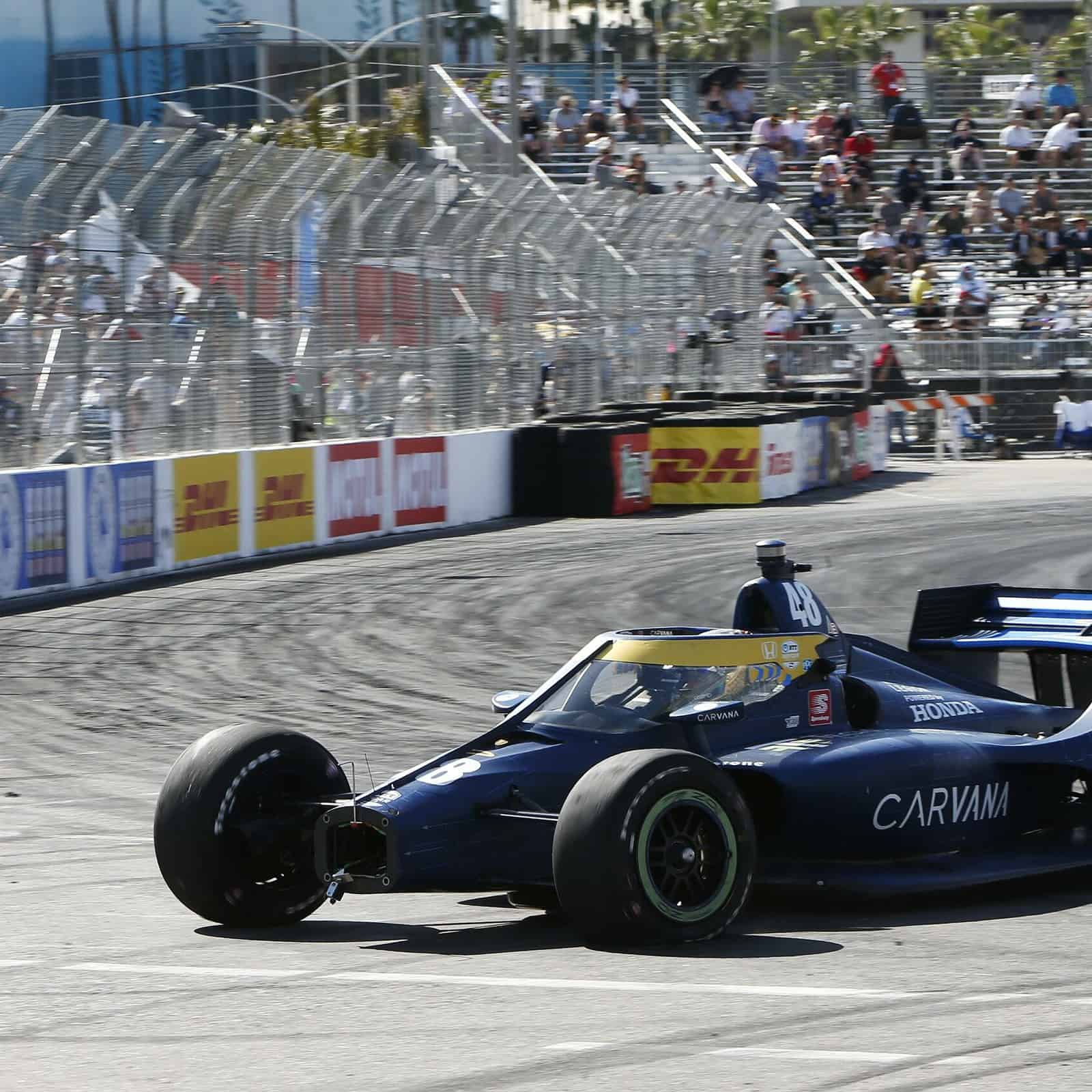 LONG BEACH, Calif.— Simon Pagenaud’s quest for a second victory at the Acura Grand Prix of Long Beach got off to a good start as the 2016 Long Beach winner led the opening practice session on Friday (April 8).

There were a few stoppages in practice for wall contact involving Jimmie Johnson and Dalton Kellett, plus some stalled cars caused some yellow flag periods around the track. However, there were no instances of heavy wall contact.

As Johnson was going through Turn 5 in his No. 48 Chip Ganassi Racing Honda with just over 16 and a half minutes to go in the practice session, the seven-time NASCAR champion took the corner a bit too sharply and hitting the curb sent the car into the tire barrier.

“That was me just being greedy with the curbs there,” Johnson said on pit road during the session. “I could see a lot of black on those curbs to know guys were taking it, it just got a touch too much and the bottom of the car, the tub hit and once that happened I mean I was four wheels in the air and wide and into the tire barrier.”

Dave Burns asked Johnson about his right hand since Johnson did not let go of the steering wheel before the impact.

However, Johnson had a cast on his right hand in a video posted to social media that indicated that Johnson will get a re-evaluation on Saturday morning.

Johnson posted a second update Saturday morning stating that he does have a fracture in his hand. His team set up a carbon fiber splint on his hand, and he will attempt to practice Saturday.

The only full time single car operation in IndyCar, Juncos Hollinger Racing has a mountain to climb every weekend going against a field full of multi-car teams with multiple data streams.

However, their full season rookie Callum Ilott managed to go ninth fastest around the circuit with a lap of 1 minute, 8.0201 seconds, just .8210 seconds slower than Pagenaud’s fastest lap. The British racer

“We had a lot of items to test, this is one of the tracks I had been at last year so it made sense to put the most items to test at a weekend here,” Ilott said. “I got through all of that obviously with a good result as well. So the team’s happy, the engineers are happy, the driver’s happy, a little moment with the wall but what’s a push lap without a wall moment?”

Ricardo Juncos and Brad Hollinger’s partnership seems to be paying dividends. Ilott finished where he started in St. Petersburg and led a few laps in Texas en route to a 16th place finish.

After spending the last four seasons at Rahal Letterman Lanigan Racing, Takuma Sato switched to Dale Coyne Racing’s partnership with Rick Ware Racing and that partnership paid dividends at the start of the season.

Sato finished 10th at St. Petersburg before an incident with Devlin DeFrancesco knocked the No. 51 Honda out of contention and into a 20th place finish. However, Sato has a win at Long Beach with A.J. Foyt Racing in 2013, and small team experience might help the Japanese racer out as the team looks to improve in California.

Sato’s working this year with a new race engineer in Don Bricker, a long time open wheel veteran with a lot of engineering experience in junior categories and as a support engineer in IndyCar proper. It has taken time to get Sato adjusted to a newer working environment,

“We put on lots of ideas on the table,” Sato said. “And I will follow whatever they they’re doing first, and then converting [it into] something new and that’s what we are doing. It always takes time, but it seems like we are working pretty well.

“It’s fantastic to see everybody’s commitment and passion. And I will say very strong engineering considering the resources for one of the smallest teams. They are putting all of the resources and finances for purely the performance and the car, which is just a fantastic environment for me.”

Sato was 23rd in the first practice session.