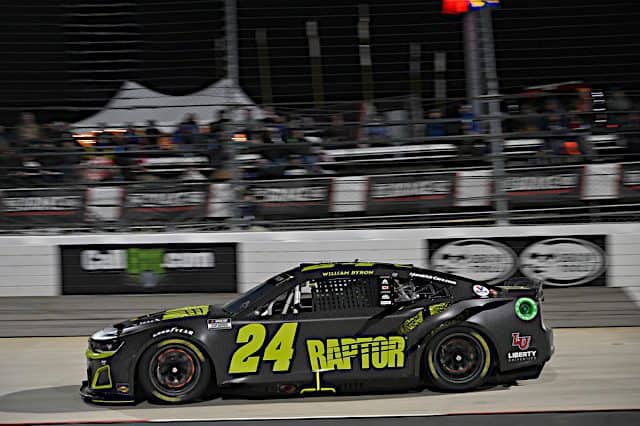 After winning the NASCAR Camping World Truck Series race at Martinsville two days ago, Byron earned his fourth career Cup victory on a cold night at the 0.526-mile short track.

“It feels awesome. When the last caution came out, I thought everyone would pit,” Byron told FOX Sports 1 after the checkered flag flew. “We were aggressive and stayed out.

“This one’s for my mom,” he added, referring to his mother’s brain tumor found around this time last season. “[It] means a lot to have her here.”

"This one's for my mom." – William Byron pic.twitter.com/7ieU8QbGG3

Leading a race-high 212 laps, the driver of the No. 24 Chevrolet took the victory over Joey Logano and Austin Dillon. Ryan Blaney and Ross Chastain rounded out the top five.

Brothers Kurt and Kyle Busch finished sixth and seventh, respectively. Aric Almirola, Chase Briscoe and Chase Elliott, who dominated the first half of the race, rounded out the top 10.

Kyle Busch struggled with handling for much of the night, but a pit stop for fresh tires prior to the overtime finish allowed him to surge to a top 10. But that wasn’t the only problem for Joe Gibbs Racing, a team widely expected to run well based on its history at Martinsville.

Last week’s winner Denny Hamlin had trouble finding his bearings as he fell a lap down early and couldn’t recover. He later stalled on the track to bring out the first caution for an incident on the track, and to add insult to injury, he was tagged for speeding on pit road and stopping before pit road was open. After restarting at the tail end of the field, Hamlin was hit for speeding once again on lap 396 and ultimately finished 28th.

For much of the race, Christopher Bell was the head of the JGR brigade until he got hit with a penalty for crew members over the wall too soon on his green-flag pit stop. He couldn’t quite recover, falling one lap down to end up with a 20th-place finish. One of the pre-race favorites in Martin Truex Jr. struggled with handling for much of the race and suffered a flat tire almost immediately following his green-flag pit stop. He ended up 22nd, two laps down.

This is a track full of firsts for Hendrick Motorsports. pic.twitter.com/QMSuE9UYJ0

The duo of Byron and Elliott led all but six laps, giving up the top spot only through a series of green-flag pit stops in stage three. Austin Dillon led a single lap and Blaney led five during that cycle.

The race also set a record for fewest cautions at Martinsville since 1977 with the yellow flag flying only four times – two of those being for a cause other than the stage-ending yellows.

Next on the docket for the Cup Series is the Food City Dirt Race at the Bristol Motor Speedway dirt track on Easter Sunday, April 17 with TV coverage provided by FOX starting at 7 p.m ET.