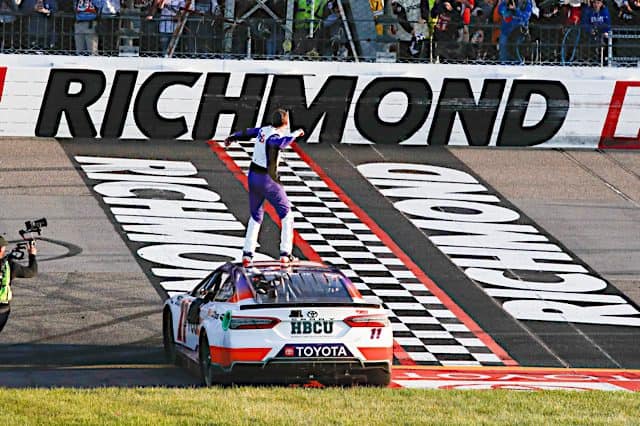 With NASCAR in the midst of its short-track swing and on the heels of Joe Gibbs Racing’s sweep at Richmond Raceway, Denny Hamlin‘s win continued the trend of the Toyota stable’s dominance at tracks less than a mile in length.

Saturday (April 3) afternoon’s NASCAR Xfinity Series ToyotaCare 250 was all JGR through and through, with teammates Ty Gibbs and John Hunter Nemechek each leading laps in the triple digits and combining to be out front for all but one of the 250 circuits. About 24 hours later, three of the four JGR NASCAR Cup Series drivers – with the exception being, shockingly, Kyle Busch – combined to lead nearly 150 of the 400 laps. While only Hamlin and Martin Truex Jr. finished in the top five, all four entries ended up with top-10 results.

While most eyes were on Ryan Blaney‘s early dominance and William Byron‘s seemingly apparent win until Hamlin executed the drive of a lifetime to chase the No. 24 down on new tires, the victory and overall performance of Gibbs’ stable continued a longstanding streak of excellence at Richmond, and short tracks in general, for the team.

HAMLIN TO THE LEAD!

Let’s look at some stats for the Toyota stable at the short tracks of the East:

These three races are set for back-to-back-to-back dates in April, with Richmond’s already-completed slate kicking things off on the first weekend of the month. Martinsville follows, with the Cup race tonight (April 9), and Bristol finishes off the short track swing from April 16-17, albeit on dirt.

NASCAR makes essentially the biggest swing in the sport possible afterward, turning from a half-mile track covered in dirt to the gigantic 2.66-mile asphalt superspeedway of Talladega Superspeedway. But — after a slow start to the 2022 season and seemingly needing more time to acclimate to the Next Gen car than other teams —  the short track stretch is the perfect time for Gibbs to readjust for the rest of the season.

That started with Richmond, where Busch has six wins, including a season sweep in 2018. In fact, Busch has only finished outside the top 20 once in his Cup career in the Commonwealth, with Sunday marking his ninth straight top 10 at the track. Truex extended his top 10 run at Richmond to seven as well, including a 2019 season sweep and a fall triumph last year with three Richmond victories in total.

Hamlin’s win was his fourth at the track and first since the fall of 2016, plus his 11th top 10 in his last 13 starts there, while Bell’s sixth-place finish was his worst at Richmond outside of his Cup debut there in 2020. His finishes run 15th (with Leavine Family Racing), fourth, third and sixth. Not bad for the newest member of the team, yet not terribly surprising given his three victories there in the Xfinity competition.

As for Martinsville, early-2000s JGR wins from Tony Stewart and Bobby Labonte gave way to Hamlin reeling off five wins at “The Paperclip” between 2008 and 2015, plus two subsequent Busch triumphs and Truex winning once each year in 2019, 2020 and 2021. Truex’s run included a jaw-dropping dominant performance in 2019, where the No. 19 led 464 of the 500 circuits.

Finally, Busch remains the king of Bristol, at least among current drivers, with eight Cup wins at the half-mile short track on the Virginia/Tennessee state line. Along with eight Xfinity wins, that Candyman dominance also encompasses two race weekend sweeps, with Busch winning the fall’s NASCAR Camping World Truck Series, Xfinity and Cup Series events on consecutive days in 2010 and 2017.

Bristol, of course, is an entirely different animal now that the track trucks in tons and tons of dirt for its surface and no JGR driver beside Hamlin finished better than 17th last year (Hamlin came home third). Bell might be the team’s best bet and seemed to be a favorite to win last year before early trouble knocked the No. 20 out of the race. Truex, meanwhile, won the Truck race on the dirt earlier that afternoon, so it’s worth watching the No. 19 next weekend as well.

All told, nearly a quarter of JGR’s Cup wins (44 of 195) have been at short tracks, while 25 of its 188 Xfinity triumphs have been at circuits under a mile. If the team was going to find its stride with the Next Gen car, Richmond was the place to do it, and this short-track stretch is the time to perfect it.

It’s hard to believe it’s now been a decade since this instantly-memorable finish in the 2012 Goody’s Fast Relief 500 at Martinsville.

Jeff Gordon and Jimmie Johnson battled late, but the Hendrick Motorsports duel was interrupted by a still-controversial caution for a stopped David Reutimann. On the subsequent restart, Ryan Newman bumped Clint Bowyer, Bowyer dove into turn 1, made contact with the two HMS cars and sent all three sliding. Newman went on to win the race.

It’s still wild to this day and might be the most exciting race at the Paperclip in the past decade. Its only possible rival is 2014 – on my birthday – where Kurt Busch rebounded from an early deficit and was the target of Brad Keselowski’s ire, as well as Johnson dominated by leading nearly 300 laps, to win.

Martinsville has the capability to put on a show full of drama and traded paint, though things typically escalate in that fashion more so in the playoff event. But with the Next Gen making its half-mile debut on Saturday night, things might get chaotic once again for the spring event.