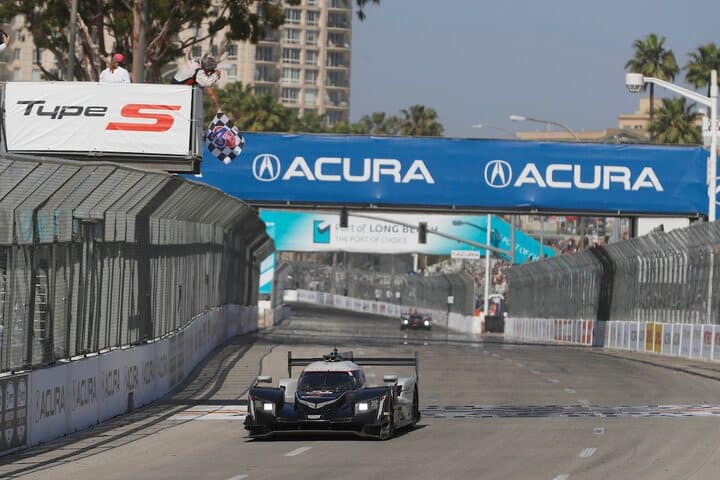 Chip Ganassi Racing’s Sebastien Bourdais and Renger van der Zande recovered from an unenforced error in the opening minutes Saturday (April 9) to win the IMSA WeatherTech SportsCar Championship Acura Grand Prix of Long Beach.  It is Ganassi’s first Prototype victory since Joey Hand and the retired Scott Pruett won the Lone Star Le Mans at Circuit of the Americas in 2015.

Bourdais started from the pole and attempted to run away from teammate Alex Lynn and the rest of the field.  Unfortunately, Long Beach is very tight.  It can bite you at any time.

Less than 10 minutes into the race, Bourdais ran up on the GTD-class Porsche of GMG Racing’s Kyle Washington at the rear of the field.  He tried to go to the inside at the hairpin.  The line Bourdais took made it impossible for him to make the corner.  He ended up nosing into the wall and dropped to the rear of the class, 21 seconds back.

The race leader crashes early in the @GPLongBeach. Will the pole-sitter rebound?

“The whole thing seemed to be under control,” Bourdais told USA’s Marty Snider after the race.  “I went to the inside of the hairpin for the first time and there were a ton of marbles.  [The car] simply didn’t turn.  From there, [I was] 21 seconds down to the leader and I thought, ‘that’s going to be a tall order.’  The car was so amazing that I was able to bring [the gap] back and do our fuel [mileage] number.  I couldn’t be more proud.

Bourdais’ error gave Lynn the overall lead with Meyer Shank Racing with Curb-Agajanian’s Tom Blomqvist right on his tail.  Meanwhile, Bourdais immediately began a charge to try to make up the gap.  In less than 10 minutes, he halved the gap between himself and Lynn.  25 minutes into the race, he was fourth and right on the tail of the leaders.

What allowed Bourdais to get back to the leaders so quickly?  Incredible pace from Bourdais, for one.  Another reason was lapped traffic that held the leaders up.

Once to the leaders, Bourdais stayed behind until Action Express Racing’s Pipo Derani made a move on Blomqvist in turn 5 to take second.  Bourdais followed Derani past.  A lap later, Derani went wide in turn 5 while trying to lap the GTD Pro-class Aston Martin of The Heart of Racing’s Ross Gunn.  That allowed Bourdais to take second.

When Bourdais took second, he was three seconds behind Lynn.  It took only a few laps of slower GTD traffic for Bourdais to run down his teammate and pass him in turn 8 for the lead while Lynn was dealing with Washington and Inception Racing’s Frederik Schandorff.

The leaders made what would be their one and only pit stop around the halfway point of the race.  Bourdais gave way to teammate Renger van der Zande, while Lynn gave way to Earl Bamber.

Just after the stops, the race’s first full course caution flew when a piece of the temporary curbing came loose in turn 5.  This bunched the field back up with the two Ganassi Cadillacs at the front of the field.

Unlike the first half of the race, the second half was marked by issues.  Two more full course yellows kept everyone together.

The final restart came with 14 minutes remaining.  Van der Zande and Bamber ran away and hid from the pack in order to decide the race by themselves.  Meanwhile, Meyer Shank Racing with Curb-Agajanian’s Oliver Jarvis had to hold off Action Express Racing’s Tristan Nunez and JDC-Miller MotorSports’ Richard Westbrook for the final spot on the podium.

In the final couple of laps, things got ridiculous.  Nunez was able to get alongside of Jarvis for third exiting turn 9 with three minutes to go.  Nunez was on the outside, but was slightly ahead when Jarvis went hard into the hairpin.  Contact was made, forcing both drivers wide.  That allowed Westbrook to slip past to gain two spots.

Bamber tried to run down van der Zande in the closing minutes in traffic.  He made some progress at first, but traffic ended any hope for a race for the win as van der Zande took advantage to get away for the win.

Bourdais and van der Zande ended up 3.761 seconds ahead of Bamber and Lynn.  Westbrook and Tristan Vautier were third, followed by Jarvis and Blomqvist.  Derani and Nunez ended up fifth.

In GTD Pro, Corvette Racing’s Jordan Taylor started from the pole in his Chevrolet Corvette C8.R with PFAFF Motorsports’ Mathieu Jaminet right behind.  Taylor was able to maintain a steady gap over Jaminet until the pit stops.  This is where things went wrong.

During the stops, a wheel nut got away from the Corvette Racing crew and launched into the air.  The team posted this video to Instagram to show what happened.  As they were pitted in front of Corvette Racing, you can see the wheel nut enter the screen from the left.

The nut ended up going through an air inlet on the hood of the red and silver Porsche and punctured the radiator.  This put the PFAFF Motorsports No. 9 out of the race.  IMSA officials penalized Corvette Racing with a drive-through for equipment being out of the pit box.

Once Antonio Garcia came in to serve his penalty, BMW M Team RLL’s Connor de Phillippi, who was sent nearly to the rear of the field for exceeding the maximum allowed engine revs during qualifying, assumed the lead.  He was on a different strategy from the rest of the pack.  Unfortunately, the full course caution due to curb repairs screwed up their strategy and forced them to stop with the field bunched up.  To make matters worse, when John Edwards tried to get in the car, he knocked the drivers’ side door off the hinge.  De Phillippi tried to put the door back on himself, but by doing so, he made himself an extra mechanic over the wall (drivers are only allowed to help with driver changes and the door issue doesn’t qualify).

The Heart of Racing’s Alex Riberas claimed the class lead as a result with Vasser Sullivan’s Ben Barnicoat giving chase.

WeatherTech Racing made a buzz by bringing in Raffaele Marciello for the weekend, but he found it hard to make up spots.  On the final restart, he was squeezed by Paul Miller Racing’s Bryan Sellers, costing him time.  However, what really cost him was contact in the hairpin with Wright Motorsports’ Jan Heylen, which spun out the Porsche.  A penalty for avoidable contact dropped him out of contention.

Riberas was able to hold off all pressure from Barnicoat late in the race to take The Heart of Racing’s first GTD Pro victory for himself and Gunn.  Their margin of victory was 1.465 seconds over Barnicoat and Jack Hawksworth.  Garcia and Taylor recovered from their penalty to third, while Edwards and de Phillippi were fourth.  Marciello and Cooper MacNeil were fifth.

GTD saw Paul Miller Racing’s Madison Snow, driving the only BMW not penalized for overrevving in qualifying, run off and hide early on.  Meanwhile, Crucial Motorsport’s Jon Miller dispatched of Team Korthoff Motorsports’ Mike Skeen and took second.  Snow was able to slowly expand his advantage up to over 10 seconds.

Meanwhile, Turner Motorsport’s Robby Foley made some progress early on after his post-qualifying penalty.  Foley moved up into the top five in class from eighth on the grid before he went too hot into turn 8 (the intersection of Pine Avenue and Seaside Way) and went into the runoff.  He was able to get himself turned around, but dropped back to 11th in class.

Minimum drive-time in the GTD class was 35 minutes of the 100-minute distance.  Once that was met, there was a flurry of activity in the pits.  Snow gave way to Bryan Sellers, who was able to maintain the lead.

The full-course caution brought the pack back together.  The Heart of Racing’s No. 27 with Maxime Martin was right on Sellers’ tail.  Martin pressured him right after the restart, but contact was made entering turn 5.  This contact cut Martin’s left front tire and put him in the wall when he hit the brakes for turn 8.  Martin was done for the day and the second yellow was out.  Gradient Racing’s Mario Farnbacher inherited second as a result.

A couple of laps after the restart, Team Korthoff Motorsports’ Stevan McAleer slid into the tires in turn 8 after possible contact from Schandorff.  While McAleer was eventually able to extricate himself from the tires and continue, the third yellow was thrown to fix the barrier.  Schandorff was judged to be responsible for the incident and was forced to serve a drive-through penalty.  Schandorff and Brendan Iribe would eventually finish ninth.

After McAleer’s incident but before the yellow came out, CarBahn Motorsports with Peregrine Racing’s Jeff Westphal went wide in turn 9 while fighting with Schandorff for the fourth spot.  The Lamborghini hit the wall on corner exit, damaging the Huracan.  That contact ended Westphal’s day.

On the final restart, Sellers was able to pull away from Farnbacher and drive to the class victory in relative ease.  Farnbacher and Marc Miller ended up second, 1.886 seconds back in the best-ever WeatherTech finish for the team.  Vasser Sullivan’s Frankie Montecalvo and Aaron Telitz were third in their Lexus.  Foley and Bill Auberlen were fourth, while Heylen and Ryan Hardwick ended up fifth.

Rick Ware Racing’s Ryan Eversley and Aidan Read were in position for a fourth-place finish Saturday in their first race together as teammates.  However, with two minutes remaining, Eversley slid into the tires in turn 8.  He was able to get himself back underway, but dropped down to a eighth-place finish.

P8 after running P4 with a few minutes to go. Unfortunately we got put off by a DPi and into the barriers. EXTREMELY proud of my performance and even more of my @RickWareRacing team. We’re here. https://t.co/j8ecLudz7d

IMSA teams will take the next couple of weeks off.  The next race on the schedule is the Hyundai Monterey Sports Car Championship at WeatherTech Raceway Laguna Seca.  That race will be on May 1 at 3 p.m. ET.  The race will air live, flag-to-flag on NBC.