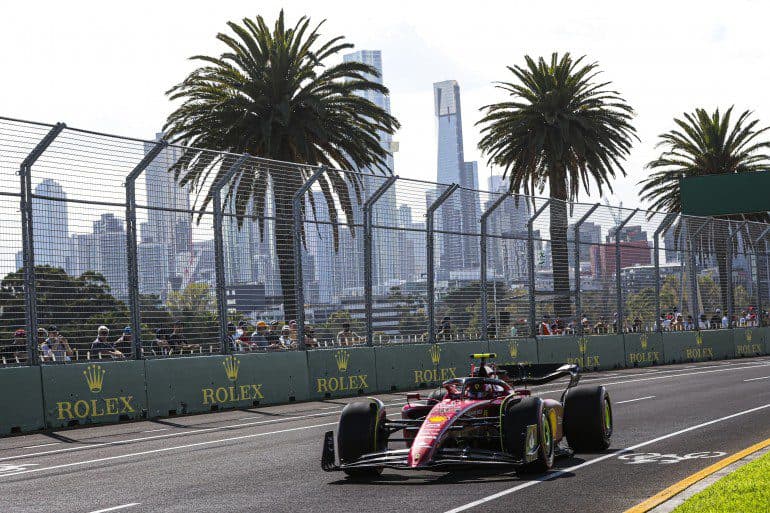 After a two-year break, Formula 1 returned to Australia, and Charles Leclerc will start the grand prix from the pole when the lights go out.  In what is shaping up as an early-season duel between Ferrari and Red Bull, or more specifically Charles Leclerc and reigning champion Max Verstappen, the two led the way through the qualifying session.

Their teammates, Carlos Sainz and Sergio Perez did more than just keep up as both were legitimate pole contenders.  In the end, after a red-flag break in the third qualifying session, Leclerc pipped Verstappen in the closing moments.

– The Ferraris and Red Bulls continued their battle at the front with Charles Leclerc pushing to the top with about seven minutes left in the session.  Verstappen starts second, with Perez in third.

Lando Norris earned a surprising fourth-place start with Lewis Hamilton starting fifth alongside teammate George Russell.  Daniel Ricciardo gave his Australian fans something to cheer about by earning the seventh-place starting position with Esteban Ocon alongside him

Filling out the last two positions from Q3 are Sainz, who had his time deleted and Fernando Alonso who crashed during the session.

– Fernando Alonso continued a theme that has been prominent in Australia: pushing past the edge of the new carʻs handling ability.  While Mercedes and Aston Martin have struggled with pace, the drivers have found it difficult to keep the cars on track.  Alonso, on a flying lap that may have put him on pole, wrecked out and ensured the second red flag of qualifying.

– The second round of qualifying seemed to work as a way of shaking out specific teams.  Pierre Gasly, who had looked strong in his qualifying performances thus far, will start 11th.

In a similar fashion, Valtteri Bottas had started well in the first two GPs of the season but failed to make it to the third round and starts from 12th.  Yuki Tsunoda looked steady but unspectacular and slotted into the 13th spot.  Rookie, Zhou Guanyu, could muster only the 14th spot and Mick Schumacher, returning after sitting out the Saudi Arabian GP, took the last spot in Q2 and will line up in 15th for the race.

– The Red Bulls leds the way with the Ferraris just behind.  Alonso placed Alpine in solid position with Bottas holding down sixth.  Norris, who had looked strong in FP3, managed seventh, as the Mercedes drivers followed.

If there was any susprise, Magnussen failling to pull through to Q2 might stand out.

– The session became unglued in the final couple minutes when Nicholas Latifi and Lance Stroll collided.  In an incident that seemed to offer no clue as to who errored, Latifi had pulled over to let Stroll by but then sped up after Stroll nearly hit him.  Latifi accelerated as Stroll turned in, apparently beginning to set up his flying lap, and everything fell apart for both.

Williams are on the back foot at the moment.  Latifi has endured incidents in all three grand prix so far and the cost accumulation will become a constricture under the cost cap for the season, making it difficult to improve and already disappointing car.

As for Aston Martin, the story is not much better.  The car is also underwhelming and both Stroll and Sebastian Vettel have torn up cars on the Albert Park circuit.

– Sebastian Vettel may be thinking that he should have stayed in Germany rather than returning to race after missing the first two grand prix.  In the first practice session, Vettelʻs car caught fire after losing power and his session ended after gaining just 18 laps of practice.  Vettel borrowed a scooter from a nearby steward, with consent, and then drove the track back to the paddock.

What seemed to be inocuous incident instead brought a €5,000 fine.  Written in the FIA rulebook is a stute stating that no one, except authorized officials, are permitted on the track for the first five minutes after practice sessions.  While enforcing the rule may be worth a debate, the fact is that Vettel failed to adhere to it and took a little slap on the wrist.

But the bad start to his race weekend was not finished.  He missed out on the second practice session, and then crashed out of the third in the first half.  Having missed two races with the new car, and then unable to take advantage of the three practice periods in Australia, Vettel is behind the learning curve.

– Of course, Aston Martin might be behind in their development overall.  Vettelʻs first practice failure showed that the car is vulnerable.  His crash in the third practice highlighted that there are handling issues.  This idea gained further support when teammate Lance Stroll wrecked his car out in the same spot.

Otmar Szafnauerʻs departure begins to loom larger and larger.  Comments have circulated that billionaire owner Lawrence Stroll might be pushing the wrong buttons with the team and that pushing Szafnauer out is the terrible result of his problematic management style.  The team already looks to be backsliding this year and one might begin to wonder just how far down the order they will fall.

– The race director for the Australian GP, Niels Wittich, delivered a message to the grid that clarified restarts after safety car periods.  The focus seemed to be on Verstappenʻs antics of pulling alongside cars in front of him.  He has used this move, perhaps as a form of intimidation, a number of times recently–notably at the conclusion of the 2021 season in Abu Dhabi, then in the first two races of 2022 when he pulled alongside Leclerc at both the Bahrain and Saudi Arabian GPs.

Verstappen is the easy target but the clarificatio is also meant to keep steady speeds throughout the rest of the field so that drivers are not creating compeitive advantage by managing gaps in a way that benefits loading the car up with speed.  The basic idea is that cars will be taking the green flag single file.