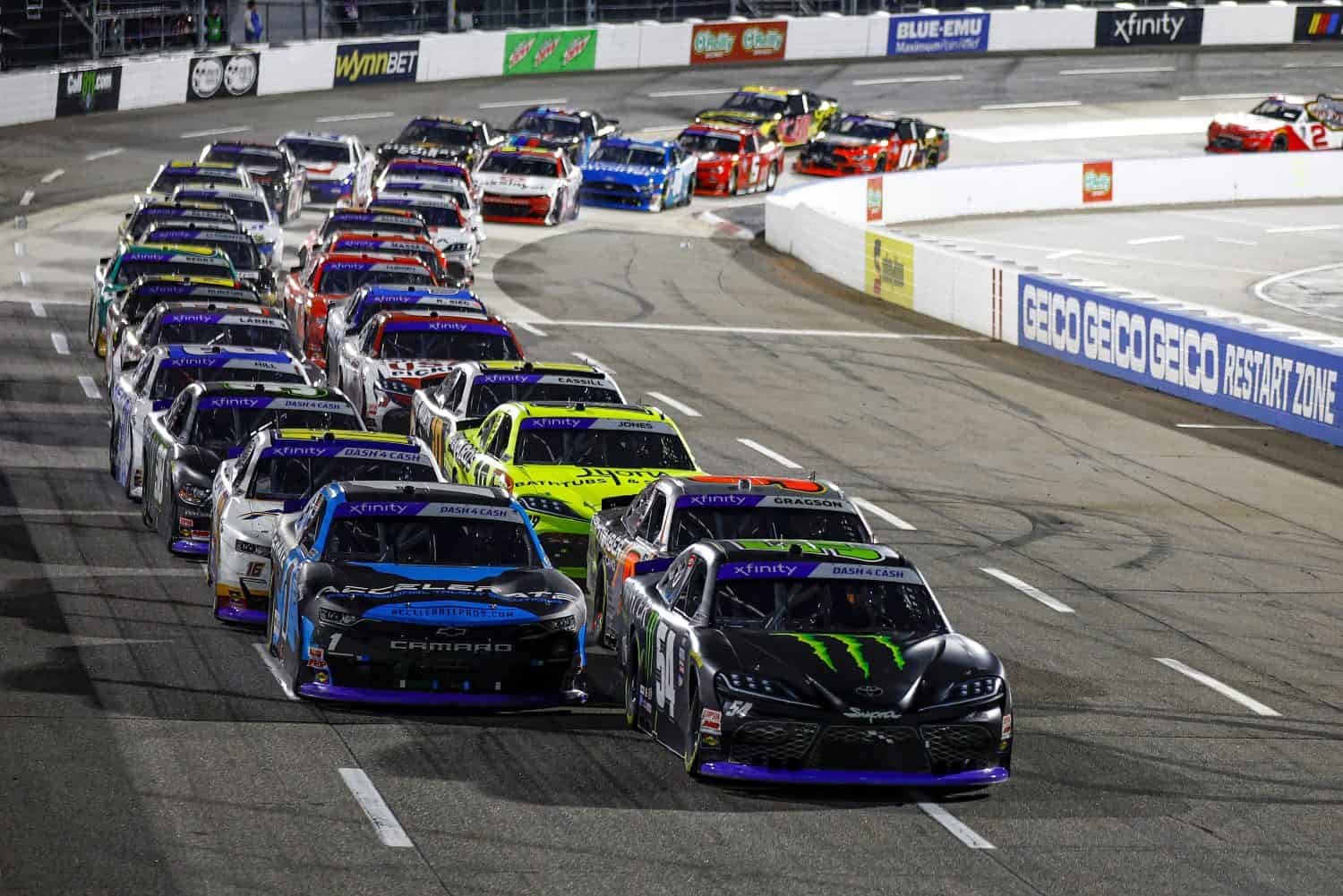 MARTINSVILLE, Va. — Tempers flared, fists were thrown and short track racing at its finest was on display on Friday (April 8) night.

Brandon Jones came away with the trophy in the NASCAR Xfinity Series Call 811 Before You Dig 250 at Martinsville Speedway, but the story leaving The Paperclip was the fight between Ty Gibbs and Sam Mayer.

THE BOYS ARE THROWING DOWN pic.twitter.com/Ht9d574K80

Gibbs, who led a race-high 197 of 261 laps and won the first two stages, was relegated to an eighth-place finish after contact from Mayer on the final lap while battling for $100,000 and the Dash 4 Cash victory. After passing Gibbs, Mayer finished fifth, though he too failed to capture the Dash 4 Cash money.

The two followed each other on the cool-down lap and parked on pit road, bumper to bumper. Words were exchanged, and that’s when fists started flying.

Footage on the jumbotron and then running to see the fight. @TyGibbs_ threw hands at @sam_mayer_. He’s getting booed by the fans like CRAZY. pic.twitter.com/fnBcLO9MXo

“$100,000 on the line, (I) put the bumper to him because that’s what short track racing is all about, he got upset, whatever,” Mayer told reporters outside the infield care center. “(Gibbs) threw a couple punches. They were weak, so can’t say much about that, it’s kind of funny. I just put the bumper to him for $100,000 and he got upset about it. But he’s been doing that to everyone else every week so far. I don’t understand how it can be that one-sided.”

Mayer appeared to be taking off his helmet when Gibbs first approached him on pit road. Gibbs kept his helmet on, and after some words and shoves were exchanged, an all-out brawl ensued.

“It’s kind of funny because he walked up to me. I had my helmet off already and he kept his helmet on. Obviously, he was scared about something or he had it in his mind to throw a punch the whole time,” Mayer said. “That’s on him, not me. I’ll talk to him if he wants to but I’m fine, I couldn’t care less. I’m gonna move on and race everybody just as hard because that’s what the Xfinity Series is all about. I’m gonna go out there, do my best, he can do whatever he wants. At the end of the day, anyone can do whatever they want to him because he’s (given himself) that reputation.”

More from @sam_mayer_, says he doesn’t feel a thing and @TyGibbs_ punch was “weak as hell”. #NASCAR pic.twitter.com/C8jujSbPBZ

“He’s gonna put the bumper to everybody else in the garage and expect nothing in return. It just doesn’t make any dang sense,” Mayer said. “I’m just gonna do it to him because that’s what short track racing is all about, unless it’s to him, I guess. He can throw all the punches he wants. It’s weak as hell, it doesn’t bother me. I didn’t feel a thing.”

This @AcceleratePros car was fast tonight, almost came out of Martinsville 100k richer. We’ll go get em at Dega!! @JRMotorsports

Gibbs recognized that if you give it, you get it. But that didn’t make him any less upset at how his race ended.

“I tried to talk to him and then he got all in my face. At that point, we gotta start fighting,” he told FOX Sports. “We got put in a bad position there. The only thing I’m mad about – he wasn’t going to get past the No. 16 (AJ Allmendinger) there and I just got hit in the left rear. Just frustrating. Just got drove into the fence at the end. I was on the other side of it last week (at Richmond Raceway), so that’s part of it.”

Once Gibbs met with NASCAR officials post-race and had some time to cool down, he ran through his thought process and why he wound up throwing punches.

“I talked to Sam, I was like ‘what are you doing?’ when we got drove into the fence,” he said. “We kind of shoved a little bit and when I turned away, I got grabbed and pulled and that just led up to that moment. Just builds up, builds up and builds up and I snapped. Just part of it. Hopefully, I’ll learn from it.”

#NASCAR … Ty Gibbs details why he punched Sam Mayer on pit road after the ⁦@NASCAR_Xfinity⁩ race at ⁦@MartinsvilleSwy⁩ pic.twitter.com/9vSrGxCVDx

According to Jordan Bianchi of The Athletic, Gibbs and Mayer met in said hauler post-race for about 10 minutes and shook hands when the meeting ended.

A NASCAR official also was injured in the brawl, but was released from the infield care center and will see a doctor for further evaluation.

The official who was injured has been released from the infield care center. I believe it was his knee/leg that was hurting him.

The Xfinity Series will take a week off before hitting the track next at Talladega Superspeedway for the Ag-Pro 300 on Saturday, April 23.

Of course, the wonderful, pious and most holy Christian driver, Ty Gibbs, had to keep his helmet on when he started the fight. At least Sam Mayer took off his helmet and fought like a man instead of being a little boy coward like Ty. I’d love to see a driver teach Ty a “lesson” so he can find out how well his Grandpa’s dental reconstruction insurance works.

Where’s Jimmy Spencer when we need him to have a conversation with the Gibbs kid. Little Gibbs is a perfect fit for the entititled drivers with Reverend Joe.

Bill B
Reply to  Old Fan

I doubt there is anyone Ty Gibbs could go up against where he wouldn’t end up getting his ass kicked. He would be wise to never be the one to throw the first punch. He already knew not to take off his helmet.

The gibbs like to hide behind God, But there actions yesterday showed the world what pure scum the gibbs truly are, disgraceful is all that can be said about the gibbs,

I have always wondered how Joe Gibbs managed to have two careers that play almost exclusively on Sundays.

Reverend Joe is as ruthless as Mr. H because it is ALL about the money.

Mayer is a racer. Gibbs is a spoiled child playing a game. Someday someone will stomp him like the dirty little bug he is. Aside from that it’s sad to see so many rich kids playing race car driver who still can’t get up to run with the big dogs. Josh Berry would be the exception, thanks mostly to Junior.

Can you say that again, only in English this time?

I think Ty has spent too much time talking to Denny Hamlin. they both seem to think it’s ‘just racing’ when they punt someone, but it’s ‘over the line’ when they get it back.

Using the correct words to describe young Gibbs would not make it through the censors. But Mayer’s comments about ‘this is what Xfinity racing is about’ speaks volumes. That race deserves a Tony Stewart commentary.
The Xfinity drivers in general looked like non-professional hobby stock racers. If this is what you want, a local Saturday night track is a lot cheaper.