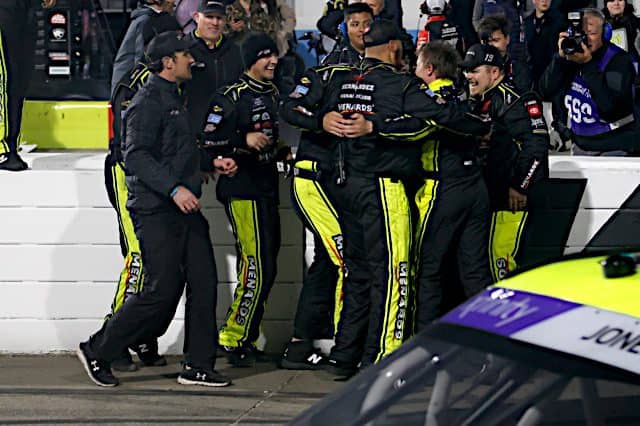 Well, that was interesting. Brandon Jones took home the checkered flag in the egregiously long-titled Call 811 Before You Dig 250 Powered by Call811.com. Landon Cassill, AJ Allmendinger, Austin Hill and Sam Mayer rounded out the rest of the top five.

This one was full of drama, and by the time you’re reading this, you probably already know exactly what I’m talking about. Ty Gibbs and Mayer duked it out (if you can call it that) on pit road, and those who are keen into the sport may or may not have seen it coming. As big of a storyline as that is, it isn’t the only one worth mentioning.

Jones added himself to the playoff conversation with a much-needed win. A veteran of the NASCAR Xfinity Series at this point, Jones has won or has had a chance to win at just about every track. However, he had been winless since 2020 and has been in need of a victory for quite some time. He used the last-lap drama to his advantage and came out on top.

Mayer is one of the youngest drivers on the Xfinity circuit, and I’ve made it no secret that he and Gibbs have a lot riding on them in terms of the future of the sport. However, Mayer comes across as this likable kid who’s extremely talented and wants the win. He won’t do anything egregious if he doesn’t have to, and if he gets spun or collected in some late-race drama — which has happened more than once this season — he’ll shrug it off and move on. He did just that after the scuffle between he and Gibbs, and has come away from this weekend with exponentially more fans than he came into it with. Good on ya, Sam.

Sam Mayer gives his side of the story about the tangle with Ty Gibbs: pic.twitter.com/61YVXcf1wW

The final spot on this week’s winners list goes to Cassill, who finished in a career-best second. Cassill has caught some eyes this season with his ability as a wheelman, and he’s had several high finishes to show for it. When he doesn’t finish high, it’s usually because he’s been caught up in a wreck or there are some problems with the car which are out of his control. Going forward, Cassill will most certainly be one to watch as he finds his groove. I predict at least one win out of him before the season’s over.

Sheldon Creed was one of the drivers I had high hopes for coming into the year, and I still do. He had a stint of domination in the NASCAR Camping World Truck Series, and I thought his transition into Xfinity would be as smooth as butter. For whatever reasons, that hasn’t been the case. He’s finished in the back 20 spots the last two races, with Martinsville being a whopping 30th. Undoubtedly not the best effort, but maybe he’ll be able to turn the season around.

The final spot on our losers list goes out to Gibbs’ few fans after last night. In racing fights, it goes without saying that if you mean business, the helmet comes off. Apparently, Gibbs missed that note and kept his own. I don’t think I’ve ever heard the number of boos at an Xfinity race that Gibbs received, but something tells me he and Coach Gibbs will be having a long discussion very soon.

Footage on the jumbotron and then running to see the fight. @TyGibbs_ threw hands at @sam_mayer_. He’s getting booed by the fans like CRAZY. pic.twitter.com/fnBcLO9MXo

This week in my personal favorite segment, we’re going to give a nod to small teams working with some experimentation. Jeremy Clements Racing’s No. 51 Chevy has run the First Pacific Funding scheme before, but the chrome numbers really set this car off.

This beast is ready to roar tomorrow! 🏁 pic.twitter.com/yFyY0eL2cf

The gold, blue and black are a combination that we don’t see too often, and the wrap works well with the body lines. This was a clean scheme before the chrome numbers, but they really do put the cherry on top when it comes to the eye-catching aspect. Unfortunately, according to Clements’ Twitter, they won’t be making a return. It’s a sad day.

We haven’t gotten to talk in a while, have we? With Allmendinger winning at Circuit of the Americas and Jones taking home his first checkered of the year, those two in with one win apiece along with Noah Gragson and Austin Hill, while Gibbs is still in with three. NASCAR has yet to release a statement or ruling for Gibbs, but it’s something to watch.

Finally, we’ve reached the point where I get to discuss this fight in detail. Look, there’s no love lost between these two. That much is evident.

Even during their time in the ARCA Menards Series, the two racers have had their fair share of clashes, and we’re just getting started.

@sam_mayer_ won today's @ARCA_Racing East event before the green flag in the Trucks. Here are Mayer's thoughts on racing with Ty Gibbs and his thoughts when Gibbs wrecked with under 20 to go. pic.twitter.com/ufpvWTQZk6

Firstly, what a terrible look if you’re Gibbs. Your grandfather owns the team, he watches each and every race you’re in and you have the best equipment, yet you can’t lose with some dignity? He let Mayer get inside him at Martinsville, a mistake many drivers make, but he didn’t have the maturity to deal with it. He gets heat for driving his car like a weapon at times, and it’s definitely warranted. Take a look at his rear-ending of Mayer afterward, then try and tell me I’m wrong.

I’ve talked on and on in several Breakdowns about the fact that Gibbs is positioning himself to be the next villain in NASCAR, and Martinsville wasn’t just a step in that direction, it was a huge leap.

Secondly, if you’re going to pick a fight on pit road, at least have the gall to take your helmet off. Mayer eluded to it in his post-race interviews, and he’s right. There’s no way Gibbs wasn’t coming over to cause trouble, and he kept his helmet on throughout it.

This begs the question, what should NASCAR do? Despite his faults, Gibbs is most definitely in control of the Xfinity Series for the moment with three wins on the season. Should he have to vacate one, or all of them? Should NASCAR absolutely bring the hammer down, or should it let this rivalry continue to captivate Xfinity audiences? That’s for the people that get paid much more than me to find out, but either way, I’d like to be a fly on the wall at the next family dinner.

These are two of the youngest drivers in the sport. Their talent goes without question, and they’re already on two of the best teams in the Xfinity series. Plenty of people are talking as though this is the start of something between the two drivers, but those who have tuned into an ARCA race over the past few years have to know that this isn’t the beginning, but the current climax of what could be NASCAR’s most interesting rivalry.

It’s ‘Dega baby! The circuit takes a weekend off before heading to Talladega Superspeedway for the Ag-Pro 300. Brandon Brown won the last race at Talladega, and we’d have to have some sort of amnesia to forget it. The green flag flies at 4 p.m. ET and will air on FOX and the Motor Racing Network.

NASCAR doesn’t need to do anything. The problem will fix itself eventually. Someone will rip that helmet off and beat the living crap out of him.

Mini Gibbs is a nasty piece of work.

A rich punk who is given the best equipment, and has only showed his ass.

I make typos too but mine don’t get seen by many thousands of people. This is an example off why spell-check cannot be exclusively relied upon.

Bill B
Reply to  Ron

“This is an example off why spell-check cannot be exclusively relied upon.”

Is the “off” itself the example? LOL

C.J.Andrews
Reply to  Bill B

C.J.Andrews
Reply to  Bill B

Bill B
Reply to  C.J.Andrews