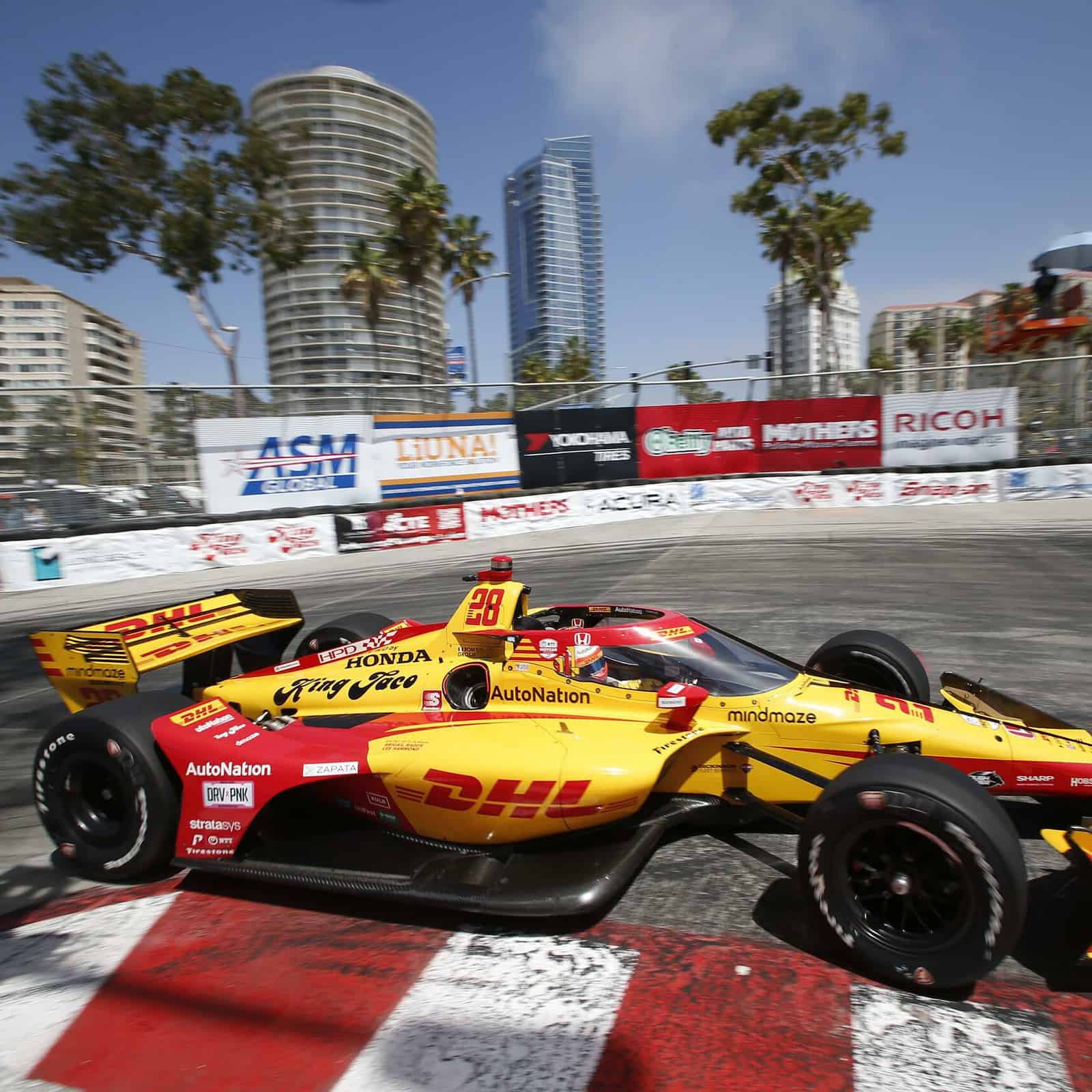 Running in fifth place just before the second series of pit stops in the 85-lap race, the former Formula 1 veteran moved to fourth position following Colton Herta’s accident in turn 9 on lap 56.

After the full course yellow for Simon Pagenaud’s stopped car on the flowers in the fountain complex between turns 2 and 3 on lap 60, Grosjean gained another place on the ensuing restart when the then third-place runner Marcus Ericsson got loose and hit the wall between turns 4 and 5 with the left rear of his car, damaging the suspension on the No. 8 Chip Ganassi Racing Honda and eliminating the Swede from competition.

Marcus Ericsson hits the wall and gets into his teammate Scott Dixon!#INDYCAR // @GPLongBeach pic.twitter.com/3zThnKl0U9

Grosjean was in third place, but there was a strategic wild card that the No. 28 Andretti Autosport team had played to help the Swiss-born Frenchman in the final stint of the race. The crew had one more new set of red sidewall alternate Firestone tires in the pits for the final pit stop. The red alternate tires give more grip but they have a much shorter life span than the primary black sidewall Firestones and the crew made the decision to pit as soon as Herta hit the wall to get ahead of a full course yellow. The rest of the top five drivers were on the primary black sidewall tires.

After stalking Alex Palou for a handful of laps, Grosjean tried to pass the Spaniard going into turn one at the beginning of lap 69, but the defending IndyCar champion defended his position and kept second place for the remainder of that lap.

One lap later and Grosjean managed to snatch second place away from Palou and the chase was on to catch eventual race winner Josef Newgarden.

“The first overtake didn’t work, if that one had worked I think we would’ve won,” Grosjean said on pit road after the race. “But [Palou] did really good braking to defend his position and I had to wait an extra lap and use an additional 15 seconds of push to pass and then Josef was up there.”

After a full course yellow for Jimmie Johnson and David Malukas’s stranded cars in the turn 8 tire barrier, Grosjean tried to overtake Newgarden going into turn 1, but with five laps to go Newgarden defended his position very hard and kept Grosjean at bay.

Newgarden pulled away steadily over the remaining few laps before INDYCAR neutralized the race on the final lap by calling a full course yellow for Takuma Sato’s stopped car in the turn 8 tire barrier. With no cars allowed to pass, Grosjean had to settle for second with Palou in third.

Close, but not close enough.@RGrosjean scored his third runner-up finish of his young @IndyCar career, and his first under the @FollowAndretti colors. #INDYCAR // @GPLongBeach pic.twitter.com/ufeZRmhnsJ

Grosjean’s result was as satisfying as it was disappointing. Grosjean had a car that was capable of qualifying in the top three, but an incident in the turn 5 tire barrier during Saturday’s (April 9) final round of qualifying relegated the 2011 GP2 Champion to sixth place on the starting grid.

“I think we had the right strategy,” Grosjean said post-race. “We had a good pit stop from the guys, good communication, and then a P2, so that’s pretty good. I think we’ve got a very strong baseline and a car that can go super fast. It was my fault, just didn’t qualify well. If I had started P2 today, things would have been a little bit easier.”

The next NTT IndyCar Series race is the Honda Indy Grand Prix of Alabama at Barber Motorsports Park on May 1st.