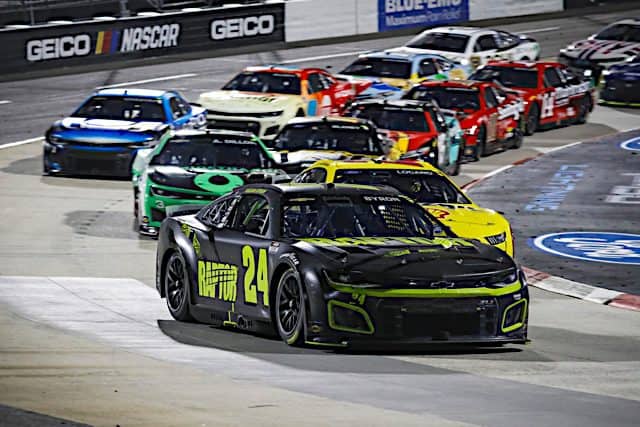 The streak of different winners this NASCAR Cup Series season came to a halt at seven on Saturday (April 9) under the lights at Martinsville Speedway. William Byron held off Austin Dillon and Joey Logano on the final restart to win the Blue-Emu Maximum Pain Relief 400. Byron dominated the second half after taking over the lead from teammate Chase Elliott during pit stops after stage two. He led all but five of the last 217 laps, including the three overtime laps that came after Todd Gilliland brushed the wall with just six laps remaining.

The only lead changes of the night came during pit cycles or under caution, with many drivers complaining about the inability to make a move. Byron and his crew, however, made all the right ones.

And don’t forget Ross Chastain. He started 27th, the lowest among the top-10 finishers. He didn’t crack the top 10 in the first half but worked his way forward in the second half, finishing fifth. He now has five top-five finishes, the most in the NASCAR Cup Series. Chastain’s race was unremarkable until the final running order, reminiscent of drivers like Matt Kenseth, who won a title by being upfront when it counted, sometimes after flying under the radar all day. Chastain has shown he can race the leaders all race long, and this week he took the stealth route to the top five. He and his Trackhouse Racing team are the real deal.

Short track racing often brings out tempers, and things were hot before the Cup race even started. After the pair exchanged bumpers during the NASCAR Xfinity Series race Friday night, Ty Gibbs and Sam Mayer exchanged fists after the checkered flag. The two have had some bad blood dating back to their ARCA Menards Series days, and nothing changed this weekend.

As the pair exited their cars, Gibbs (still wearing his helmet) approached Mayer and shoved him before turning and walking away. When Mayer followed, prodding Gibbs with a finger, Gibbs swung at Mayer a couple of times and the pair scuffled as crew members and officials tried to separate them. One official was injured in the scrap.

Gibbs is gaining a reputation as he climbs through the ranks, and it’s not a good one. He’s very talented, but he’s also the grandson of the team owner and his attitude hasn’t gone unnoticed. He’s been aggressive on track in a way that’s not always productive, and other drivers and teams are taking notice.

It’s unlikely NASCAR will take any action against Gibbs (or Mayer) because, at this point, it’s hard to post the fight on social media as something entertaining and then turn around and issue penalties for something it gained eyeballs from. The sanctioning body hasn’t penalized fighting in recent years, so it’s not a great look to reverse course on that again.

But Gibbs is fast becoming a villain with his entitled actions on track and relation to his team owner. It would be a kindness to the youngster if Joe Gibbs sat him down for a discussion about his attitude. If he doesn’t, the other drivers are going to adjust it for him.

Polesitter Elliott cruised to the win in stage one and stage two. In fact, the first two stages featured zero lead changes as he dominated. Then came the end of stage two when Elliott lost the lead on pit road and never saw it again. The No. 9 didn’t fare nearly as well in traffic as it had up front, and he steadily fell back. He rebounded somewhat late, bouncing back to a 10th-place finish, but the magic was gone.

Fall Martinsville winner Alex Bowman started 15th, and that’s about where he ran for most of the night. Bowman didn’t score any stage points, finishing 12th. It wasn’t a bad race, with a finish right on his 2022 average.

Active Martinsville win leader Denny Hamlin struggled in practice and qualifying and fell into the clutches of Elliott in the final laps of stage one, falling off the lead lap and getting caught there. Elliott also lapped Michael McDowell before the end of the stage, taking Hamlin out of the free pass position. It’s hard to get a lost lap back at Martinsville because the leaders lap cars so quickly, and Hamlin never recovered. He brought out one of the night’s four cautions when he stalled on track at lap 312. Hamlin followed up his Richmond Raceway win (and lone top 10) with a 28th-place finish, two pit-road speeding violations and slipped to 21st in points.

There were zero passes for the lead on track. Let’s start with that. Drivers complained that passing was difficult, with few of the signature Martinsville moves in evidence. In fact, the race was the first real letdown for the Next Gen racecar. That it came at Martinsville, of all places, where aerodynamics shouldn’t matter as much as other tracks, was puzzling, but it was right there in black and white.

But there were also several factors that were not in favor of making a great race. It’s early April, and while spring is arriving in many Southern locations, it was a chilly weekend in the Virginia foothills, with snow falling not far away from the track. A cold track, a night race and little rubber on the racing surface all combined to hurt the final product. Night races are rarely as good as day races on a hot, slick track, and the track this week was cold from the start. It must have been miserable for the fans in the stands, even at a disappointing 400 laps.

Finally, NASCAR‘s 670-horsepower package should be rethought at short tracks, where speeds are already self-limiting. It looked as though cars didn’t have enough power to close. All of these things combined for the least exciting race of 2022 and possibly ever at Martinsville.

The thing is, most of them can be fixed. The race, if it must be run at night, should be in full summer. That would help cars lay down more rubber and create a better racing lane. There’s no reason they couldn’t give teams more power at Martinsville and Bristol. This race got let down at every corner, but the fans were the ones who really paid for it.

It’s Bristol, baby. Well, sort of. It’s dirt Bristol Motor Speedway. Last year’s race was fun, in an experimental, let’s see what happens if we put Cup cars on dirt for the first time in half a century kind of way. There were problems with the temporary surface, which didn’t hold up as well under the heavy Cup cars as it did with other series, and the dust was terrible.

Bristol dirt represents both NASCAR’s best idea in years and its worst. There is absolutely a place for dirt racing in NASCAR’s national series, but it should be at an actual dirt track with a prepared surface and the right people and equipment to care for it, not on a temporary surface. NASCAR has probably burned a bridge with Eldora Speedway, but it should find a venue that gives fans the best race possible.

Last year, the top dirt drivers were bested by Logano, a driver with virtually no dirt experience. This year’s race will be as much a test of the new car as the drivers, so what happens is anyone’s guess. This is how we should go into races. Unknowns and unpredictability are great if they lead to a good race, but it’s just a little hard to be optimistic after last year.

How… come there were no fireworks?

There may be another explanation as to why there were few fireworks at Martinsville, a track that generally produces some beating and banging and cars going home with tire donuts and squashed bumpers. Teams don’t have enough body panels to replace them if they get heavy damage. Panels come from a single supplier, and right now, there’s a shortage of them.

Part of that is there is a serious shortage of body panels right now. The teams simply can’t afford to wreck their stuff this weekend, because they won’t be able to replace it for next week’s race. Partly how RFK got in trouble at Atlanta.

Bill’s a veteran crew member, so this gave some great insight into why drivers didn’t seem to be racing very hard Saturday night. If they don’t have the parts to replace damaged ones, and they can’t risk altering them during repairs, they have few other choices but to call off the dogs and instruct the drivers to keep them as pristine as possible. Sure, there’s another short track this week, but it’s followed by Talladega Superspeedway and Dover Motor Speedway, then a string of intermediate tracks where aero is vital, so running bashed-in bodies won’t fly.

The supply shortage is something that NASCAR needs to find a way to correct and soon. Essentially keeping race teams from racing isn’t really what the organization should be doing. It may not be NASCAR’s fault directly that the manufacturer can’t meet demand, but the sanctioning body can find ways to alleviate the ramifications of the problem.

So who thinks the newest version of the Car of Terror is performing up to the hype from the NA$CAR brain trust? How could anyone actually believe it would?

Thanks Amy for the perspective. The car will heal itself. Not a lot of parts available as stated, to really fine-tune it. Also, they crews have to test the boundaries.
I agree with Kyle Petty’s assessment, that William Byron will be the hot ticket long term with Hendrick. What’s not to like. He is clean-cut, nice person, sponsored by Liberty University. He has parents who are with him, hasn’t uttered a racial slur, a legacy, or from the mid west. He also can drive. Young, energetic, and can drive. He’s going to win many more races baring injury.