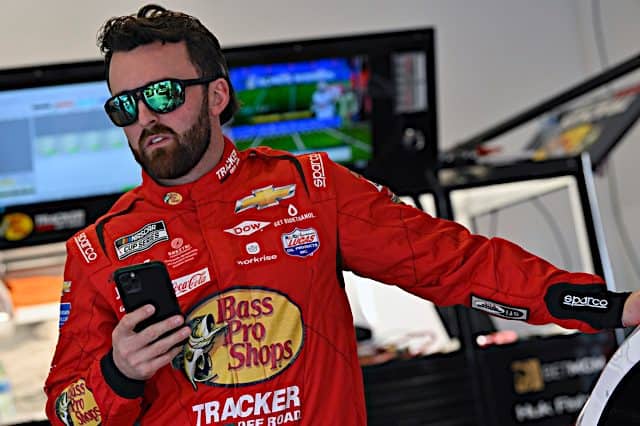 Despite scoring a third-place finish Saturday night (April 9) at Martinsville Speedway, Austin Dillon undoubtedly wishes he had the last restart back.

Dillon was running second to William Byron when Todd Gilliland hit the wall in the closing laps of the race. The ensuing caution erased Byron’s two-and-a-half-second lead and provided Dillon with one more shot at victory. As the field lined up for the overtime restart, Dillon elected to start directly behind Byron in the more advantageous low line, with Joey Logano positioned alongside Byron on the high side. But when the race resumed on lap 402, Dillon spun his tires, allowing both the No. 24 and the No. 22 to scoot away. Byron became the first driver of 2022 to win multiple Cup Series races while Dillon was left to wonder what might have been.

“I’m a little bummed,” Dillon said after the race. “I like to pride myself on, when we get in those situations, as being clutch, and that was anything but that on that last restart. I spun the tires pretty good through the gears, and once I got back in line I had some grip. I feel like we had good forward drive all night long, and I just felt like if we got through the gears we would have a shot at them.”

Martinsville was already the second near-miss in 2022 for Dillon. At Auto Club Speedway in February, he began the final restart as the second car in the low grove, just like Saturday night. That restart went a little better. Dillon battled his way to second in the final four laps but was unable to catch Kyle Larson by the time the checkered flag flew.

Now, eight races into the 2022 NASCAR Cup Series season, Dillon finds himself in a familiar place: the playoff bubble. It’s a position with which Dillon is well acquainted, especially after last year.

In 2021, the No. 3 team spent much of the regular season knocking on the door of the top 10 in overall points. That should have put Dillon in a good place to make the playoffs. The trouble was that there were several drivers further down the standings who had already scored wins and thus had priority for a postseason spot. Still, by the time there were six races left in the regular season, Dillon was 14th on the playoff grid and had a 98-point advantage on the cut line. The No. 3 team still had some work to do, but the postseason was well within its grasp.

Then things started to unravel. Kurt Busch and Aric Almirola, both who trailed Dillon in points, won the next two races. Dillon’s Richard Childress Racing teammate Tyler Reddick passed him in points as well. Just like that, Dillon was out of the playoffs and in the awkward position of having to race his teammate for the final spot. Reddick won that contest by 25 points. Dillon ended the season with a better average finish than six of the playoff drivers, including Reddick. But without a victory, he was left out of the postseason.

Of course, Dillon has also benefitted from the playoffs’ win-and-you’re-in rule, arguably more than anyone else. In 2020, he scored a victory at Texas Motor Speedway after hovering around the playoff bubble for much of the year. Several weeks later, he had to miss a race due to NASCAR’s COVID-19 protocols. If Dillon hadn’t won at Texas, he would not have made the playoffs.

Dillon’s advancement to the postseason has hinged on a race win on two other occasions. By winning the Daytona 500 in 2018, Dillon never really worried about making the playoffs that year. That Daytona victory must have felt particularly good when he ended the regular season 19th in overall points. The previous year, Dillon captured his first-ever Cup Series victory in the Coca-Cola 600. He entered that race a distant 22nd in points. By the time the regular season concluded, he had only climbed to 19th. Win-and-you’re-in saved Dillon again.

So far in Dillon’s career, the only season when he successfully qualified for the playoffs on points was 2016. Every other year, the No. 3 team has fallen back on having a win, and in the process knocked out another team that was arguably more competitive on a week-to-week basis. The only reversal of that scenario was last year when Dillon was bumped from the playoffs by drivers with wins.

Considering his history with the playoffs, missing out on the win at Martinsville might come back to haunt Dillon in a few months. That’s not meant to diminish an otherwise strong performance by Dillon, who earned his best ever result at Martinsville and first top five there in five years. Byron clearly had the dominant car at the end of the race, and most people likely would have guessed that he or Logano would have won before picking Dillon.

But in a season where several drivers who ran mid-pack last year have already scored wins, the No. 3 team has not taken its own step forward yet. Dillon is still able to fight for top 10s and finish well most weeks, but he has not emerged as someone who can drive to the front of the field and win races. Note that he has led a combined total of 25 laps in the three races he’s won. Additionally, he has only led 335 laps in his entire Cup Series career, which now stands at 308 races. Unless Dillon finds some more speed, he might not get another good shot at victory before the regular season ends.

The No. 3 team is on track to compete for a playoff spot once again. But can it get there without a win? Dillon posted a career-best average finish in 2021, yet he found that being consistently good wasn’t good enough for the playoffs. If he finds himself in the same situation this season, Dillon may sorely regret losing the one that got away at Martinsville.