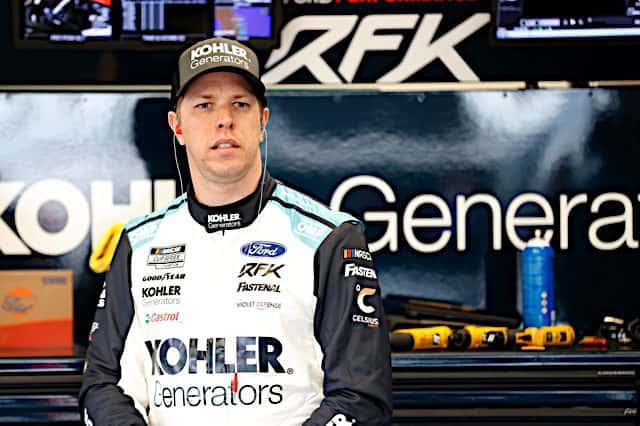 Did You Notice? … RFK Racing has officially accepted its 100-point penalty assessed to the No. 6 team and driver Brad Keselowski. The team had until end-of-day Tuesday (April 12) to file one last appeal to NASCAR’s final appeals officer but has chosen to move on.

What happened? FOX Sports’ Bob Pockrass has a great explainer up this week about how the controversy revolved around a tail panel modification from a single-source parts supplier. Simply put, NASCAR’s Next Gen chassis comes with a number of generic parts all teams are given and expected to use as is. Keselowski claimed this part had been raced multiple times and repaired to a level that should have met NASCAR’s satisfaction.

It didn’t. And the message NASCAR is sending is both clear and direct. You mess with the part? You’re going to get slammed with the type of heavy-handed, first-degree murder-level consequences that send a strong message of “never again.”

Let’s review: 100-point deduction for both driver and car owner. A reduction of 10 playoff points (Keselowski didn’t have any to begin with). A four-race suspension for crew chief Matt McCall and a $100,000 fine.

By comparison, back in 2017, Joey Logano was found with an illegal suspension on his car after winning at Richmond Raceway. His penalty? Just 25 driver and owner points, a $50,000 fine for crew chief Todd Gordon and a two-race suspension (Logano was allowed to keep the victory).

It seems like RFK’s the guinea pig for NASCAR’s Next Gen version of crime and punishment. It’s the latest misstep in a rough start for Keselowski as a car owner. The team stumbled out of the blocks, virtually invisible as one of the slowest cars during NASCAR’s Los Angeles exhibition. Then, at Daytona Speedweeks, there was the wheel modification that caused NASCAR to seize their tires. While Keselowski was ultimately not penalized, claiming the alterations were made for safety reasons, it caused unnecessary drama for the team.

The Daytona 500 has been the high point, Keselowski leading a race-high 67 laps and putting himself in position to win. But the pack racing ace couldn’t make the right moves late, fading on the final restart and finding himself wrecked as the field crossed the start/finish line. He hasn’t cracked the top 10 since, finishing no better than 12th in the last seven races.

Where does that leave RFK going forward? In not as bad a position as you think. NASCAR’s playoff format is forgiving enough in that all you need is one good race to lock yourself down a spot. Just ask Aric Almirola, who stumbled through a miserable 2021 before winning New Hampshire Motor Speedway last July. Ask Denny Hamlin after having the worst start of his NASCAR Cup Series career, arguably worse than Keselowski, wiped away with a win at Richmond just two weeks ago that takes away any playoff pressure.

The No. 6 team could easily capitalize at Daytona the second time around (or Talladega Superspeedway in two weeks). At the end of his tenure at Team Penske, Keselowski and crew chief Jeremy Bullins made a habit of sneaking away with surprise wins on strategy. The No. 2 team was often the third-fastest car on the Penske totem pole but the team used their experience and intelligence to find a way.

Expect Keselowski to take more risks as his team has nothing to lose, already 105 points outside a postseason spot. If anything, he can now pursue two separate strategies with Chris Buescher and the No. 17 in decent shape to battle for a spot on points. 24 points behind Austin Dillon for the final spot eight races in, Buescher has shown the consistency he built at Roush last season and has posted just one finish lower than 21st all year.

Bottom line, all is not lost here; we’re not dealing with a Michael Waltrip Racing/Toyota catastrophe from 2007 where Keselowski’s No. 6 could fail to qualify for multiple races. I think Keselowski realized that, understood what NASCAR was trying to do and recognized it was a battle he couldn’t win.

Better off winning the war, right? And RFK still has a chance to do so in 2022.

It’s a weird scenario for one of the most unique races on the schedule, an event NASCAR is desperately trying to label “special.” Why wouldn’t they reach out and try to grab some surprises for a race like this one? Humpy Wheeler, back in the day, was adept at getting drivers to Charlotte Motor Speedway to do a one-off for the Coca-Cola 600 or the fall event at his track. Young talent seeking part-time rides would make the cut, like a young Dale Earnhardt in 1975, or groundbreaking drivers like Janet Guthrie a year later.

I understand the difficulty with supply chain delays in building enough Next Gen chassis for these part-time opportunities. But you wonder if NASCAR could have worked with, say, Kasey Kahne in bringing him back on a one-time deal? What about current World of Outlaws point leader Brad Sweet or one of that division’s legendary competitors in Donny Schatz?

These superstar crossovers are what’s helped elevate SRX so quickly. Bringing names like Hailie Deegan, Chase Elliott, Tony Kanaan and Greg Biffle in part-time efforts raised their visibility and brought in fans that wouldn’t have otherwise watched the series. The Dirt event, held on Easter weekend, offers a rare opportunity for NASCAR to do those crossovers. Virtually every other major racing series is off. Even a guy like Jimmie Johnson could be placed somewhere on a one-time deal to join in the fun.

Just like I believe NASCAR and IndyCar can do more to bring the Indy 500/Coke 600 double back, raising the profile of each series, they need to have the bandwidth inside the garage to expand for races like this one. I’d argue drivers crossing over is always a win-win for each side, introducing fans to a name and a division they might not otherwise have been following.

I wish I could look forward to this dirt race, but I can’t because all I see is a race that took away a real Bristol race. Given that there are only 6 short track races per year, that is a high cost just to say they ran on dirt. Of course as bad as the Richmond and Martinsville races were this year with the new car, it might be a blessing.

The part that they were penalized for was a part that had been repaired and used 2 times B4 because there was no new parts available. They were passed by Nascar in previous races but apparently RFK did not fix it right this time. Nascar needs to get the parts to the Teams. This is unacceptable.

Brad just needs to win a race, that’s what it all comes down to. And yes it’s ridiculous to not have enough parts for all the teams. But as putting dirt on Bristol shows, Brian is still there and between him and Ben they are utterly mad.

If the car was inspected multiple times why wasn’t the part flagged earlier? If the team couldn’t replace the part with a legal one because of supply problems why isn’t that on NA$CAR? MR. H and Reverend Joe don’t seem to be having this problem.

“The repair policy is very straightforward,” Miller said Wednesday. “Any repair that’s done is to bring the part back to the original specification. On this part, that was not adhered to. There are body mounting landings that are part of the rear fascia that weren’t brought back to the original specifications. That’s a key design feature of the part. The repair policy was not followed. That’s really what it comes down to. A critical dimension of the part was altered.”

What they don’t want to admit is that the part fits better and the change will be secretly incorporated in all future pieces. Reminds me of Mark Martin’s “Penalty” that cost him the 1991 championship (when it was a championship).: “It’s not illegal but we don’t like it.” For the record, they welded the spacer to the intake instead of using a gasket.

I imagine there was some sort of conversation that went something like this. ” Let’s move the mounting points of this damaged part down a little to get it up in the air a little to add a little more downforce. If we get caught we’ll just say we didn’t have enough parts from Nascar and had to repair and just get by”. Last I read they accepted the point deduction and fine.

Your choosing Nascar’s excuse over Brads, Hamlin’s and Penskes ! Plus about every other team in Nascar. Wow, is this really you Brian ! Have another drink.