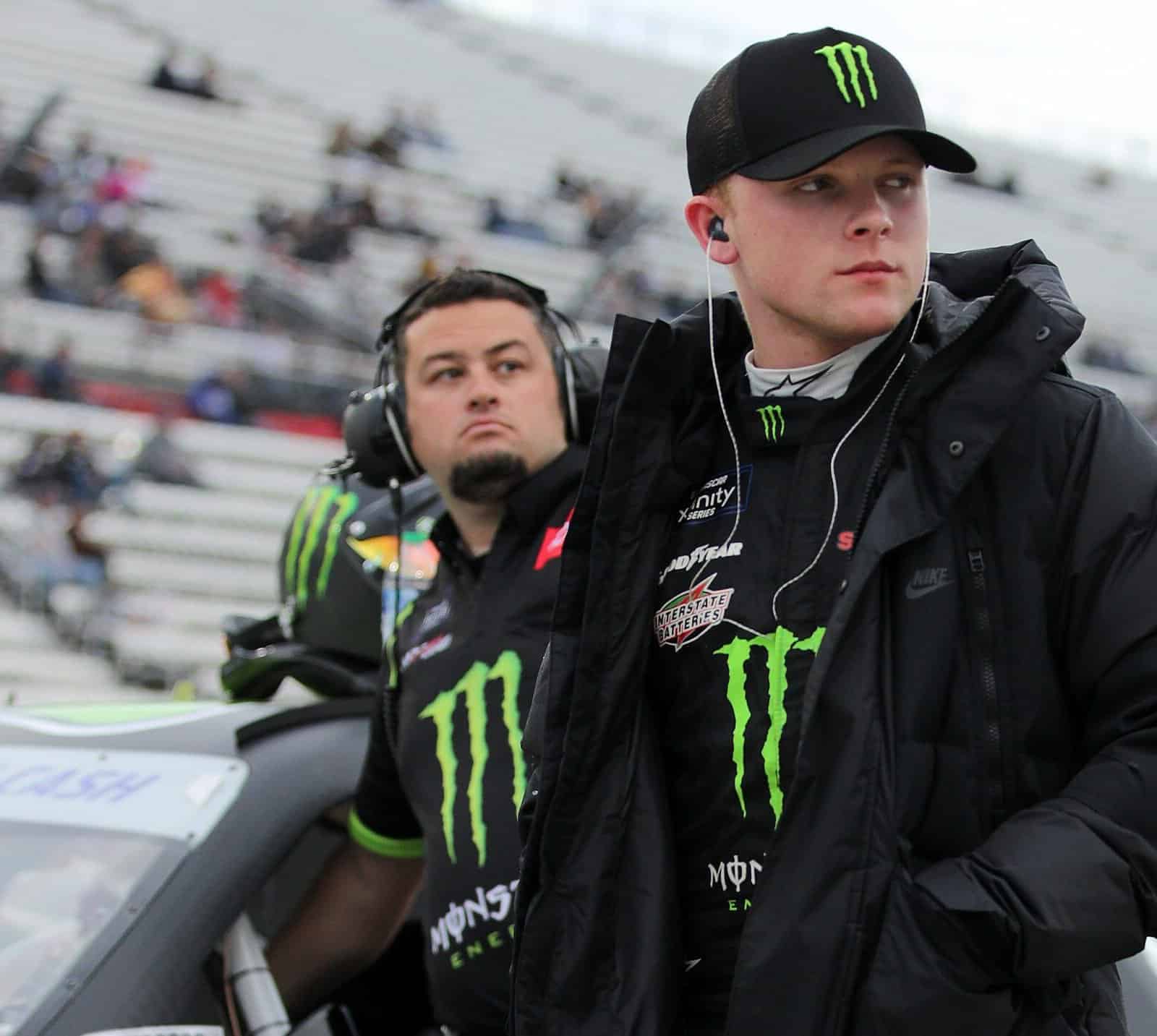 Let’s make one thing clear from the top.

Ty Gibbs is a man.

While the Joe Gibbs Racing phenom may look like a doppelgänger for 10-year-old Dash from The Incredibles movies (something he leans into with his Twitter profile picture), Gibbs is far from it.

He’s 19 years old and will turn 20 in October. While he’s still a year-and-half from being able to order a beer, Gibbs is an adult.

Which made the Ty Gibbs we saw on display last Friday (April 8) at Martinsville Speedway such a stark difference from the one we saw the week before at Richmond Raceway.

At Richmond, Gibbs forced teammate John Hunter Nemechek out of the way on the last lap with contact and raced to the win.

“I definitely deserve one back,” Gibbs told FOX Sports. “We’re racing for wins, and they’re hard to come by. I had to take it. […] We’re short track racing.”

That self-awareness went out the window six days later.

In the overtime finish at Martinsville, Gibbs had lost the lead to Joe Gibbs Racing teammate Brandon Jones in the final turn. Then came a nudge from behind by Sam Mayer that moved Gibbs out of the way. Throw in a little help from Landon Cassill on the inside lane and soon the three of them were rubbing doors, enough to cause Gibbs to bounce off the outside wall.

The Gibbs at Richmond seemed like a man willing to take what he dished out.

At Martinsville, that wasn’t the case. He made contact with another car in anger on the cool-down lap, then rammed Mayer’s No. 1 on pit road. This resulted in NASCAR fining Gibbs $15,000 on Tuesday (April 12).

See also
Did You Notice?: NASCAR's All Business With RFK Racing; Where Does Brad Keselowski Go From Here?

Gibbs then exited his car, confronted Mayer (forcing his way by a NASCAR official trying to keep the peace) and ultimately got shoved after throwing the first punch.

While I understand $100,000 was at stake and Gibbs and Mayer have a history from their time racing in the ARCA Menards Series, I feel all this would have been an overreaction from anyone given the same circumstances.

Since last year, everything has been coming up Ty Gibbs. This is probably the “worst” thing that’s ever happened to him in his career.

Then came the spin.

“I tried to talk to [Mayer] and he got all in my face, at that point we got to start fighting,” Gibbs said, as if we all hadn’t watched him walk from his car to Mayer’s, confront Mayer and take a swipe at him as he took his helmet off and then tried to walk away as events unraveled.

“It’s just frustrating, I got drove into the fence at the end,” Gibbs said. “I was on the other side of it last week, so that’s just part of it.”

If “that’s just part of it,” then why react like he did?

I came to this conclusion after thinking about it in the 12 hours after the race: Ty Gibbs is Anakin Skywalker from Star Wars.

After a year-and-a-half of success in ARCA and Xfinity (he has seven wins in his first 26 Xfinity starts) and people asking how quickly he’ll move up to the NASCAR Cup Series, Gibbs is the most-hyped driver in NASCAR right now.

He’s likely bought into it.

Combined with who he races for, the race team owned by his grandfather, Gibbs probably feels bulletproof at this point.

Which is where the Anakin Skywalker analogy comes in.

Twenty years ago next month, Star Wars: Episode II: Attack of the Clones was released. In that movie, Skywalker was 19 years old and believed to be the “Chosen One” who would bring balance to the Force.

That’s a lot of pressure!

After 10 years of hearing this hype about himself from the Jedi Order, Anakin had let it go to his head. Even the smallest of slights — like contact coming to the checkered flag — he perceived as a personal affront.

After Gibbs’ TV interview, all I could think of was this line from Anakin:

Gibbs already has some people rooting against him because of his last name and the fact he’s never been without top-flight equipment.

At 19 years old, it feels like he’s already flirting with the Black Hat (Dark Side) path of another JGR driver who was a phenom at 19 and has a history of acting impulsively when he loses: Kyle Busch.

But fans have long memories.

2022 is Daniel McFadin’s ninth year covering NASCAR, with six years spent at NBC Sports. This is his second year writing columns for Frontstretch. His columns won third place in the National Motorsports Press Association awards for 2021. His work can also be found at SpeedSport.com and FanBuzz.com. And you can hear more from him on his podcast, which is embedded below.

Well said.
If Gibbs jeeps up this kind of whiny behaviour he may find himself shedding fans in a hurry
If he thinks he can behave like this just because Kyle Busch found a way to neutralize much of his fan rejuection, I don’t think that his story has the element of overcoming all obstacles that Busch’s does. He runs the risk of being labelled as another petulant rich kid with a silver spoon …

If Ty didn’t act pretentious, and maybe acknowledged his competitors, he might be enjoyable to watch. Some thought the Dillon’s were bad, Ty Gibbs just takes it to a new level.

Kyle Busch gonna have to hand over the “Rowdy” title to Ty. Kyle’s looking downright civilized in comparison.

If talent laden, well sponsored immature children racing with entertainment value being the primary criteria for bringing out yellow flags, why should this joke of a race surprise anyone?
What I thought was the best actual racing of the night was watching William Byron be able to overcome a 2 late cautions and be able to gap the second place guy who had a green light to smash him out of the way to the delight of the fans and Nascar alike. Ben Kennedy, Steve Phelps: Tony Stewart was kidding when he said a few years ago that 3/4th of the field needs to be crashed because that’s what the fans want.
As the sport degrades to ‘sports entertainment,’ the only step left is letting the story lines dictate the finishes via a mandatory green,white, checkered final restart.

Lol. Ty Gibbs is not a real man. He’s a spoiled brat with lots of money. Ty and most of his peers bought their seats. They didn’t have to work hard and earn a ride.

Ty never had to race and finish well just to feed his family. He’s never had to fix the cars he’s torn up. Never been evicted from his home, had the lights turned off because he needed tires for the next race, or even served his country. He doesn’t have any respect for those that paved the way for his candy ass.

Get the Coach to buy you some respect little boy.

We’ve got a garage full of privileged rich kids trying to act tough.

Rest assured, NASCAR and the creative writers are on top of things. They’ll spin things as soon as the asshats come up with a new storyline.

I’m still not convinced of Ty’s amazing talent. He won the ARCA championship driving a car prepared by Grandpa’s Cup team against a bunch of low budget teams (except for Venturini). With that kind of advantage, he should have won every race last year. Now, he’s driving the #54, which has been a very competitive car for years. If he showed up and drove one of the lower budget Xfinity cars (without any of Grandpa’s team working on the car) and was able to run competitively with it, then I’d be impressed.