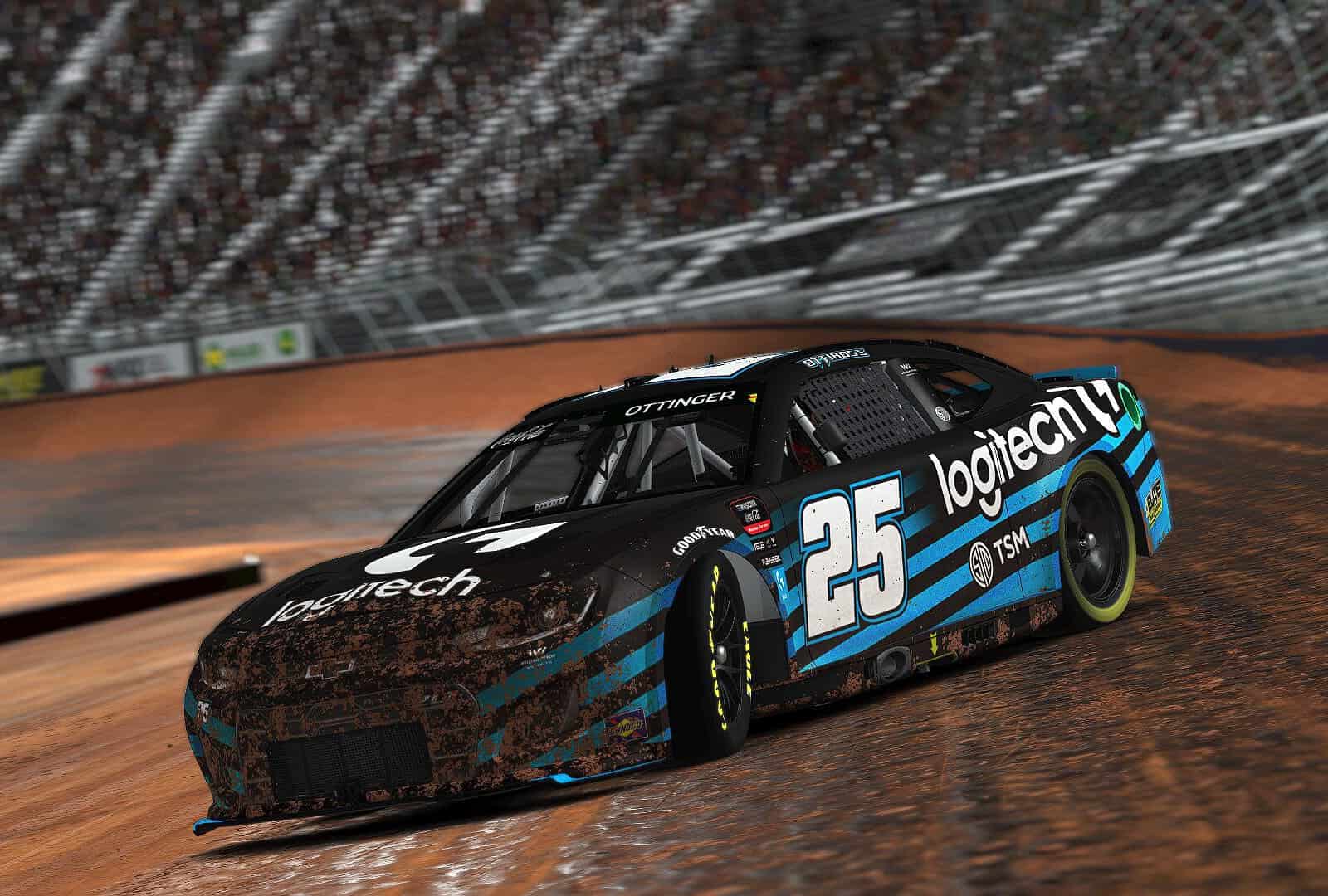 Round Five of the eNASCAR Coca-Cola iRacing Series got a little dirty as Nick Ottinger took home the win at the inaugural Bristol Motor Speedway Dirt Race on Tuesday night (April 12).

Ottinger was clearly excited about this win, one of the most unique of his long and illustrious eNASCAR career.
“It was tough sledding, not on ice obviously, but we had to navigate a lot on the dirt,” Ottinger said. “We had a really good and solid Logitech machine — glad to get the boss man [William Byron] a win after his two wins this past weekend.”
As a champion of the series, Ottinger knows what it takes to be in tough, attrition-filled races, having been been around for a long time. This win all but locks him into the playoffs, and he looks poised to make a run at a second title come playoff time.
Dirt racing is something the Coke series had never done before, but with the debut of Bristol Motor Speedway dirt in the NASCAR Cup Series last year, eNASCAR took the opportunity to put this race on the schedule for the 2022 season. Needless to say, things were wild and crazy all race long.
The race lineup was set by heat racing, a first in this series. Graham Bowlin and Garrett Manes took home the victories in each heat, which gave them the front row start in the 120-lap feature. Starting up front proved to be very important, as track position was king all race long.
It did not take long for the big one to take place and chaos to begin. Lap 10 saw about eight to 10 drivers taken out after a wreck started by Logan Clampitt and Corey Vincent created the mess. Included in the drivers taken out was the Michael Conti, who had won two out of the first four races to start the year. Those wins prove to be very important after incidents like that crash.
Perhaps the biggest moment of the race was on lap 41 when Manes and Bowlin came together for the race lead, which sent Manes nearly spinning. The result was him losing several spots, and it sent him to the back of the field.
One thing officials did to clean up the racing was implement single-file restarts around halfway. Unfortunately, the quality of racing did not seem to improve much, even though there were a few more green flag laps than in the first half of the event.
Ottinger and Bowlin proved to be the best two cars most of the race, as the two had an extremely close battle for the final green flag run of about 50 laps. Steven Wilson came on strong in the closing laps, but in the end, Ottinger prevailed, continuing his strong start to this season.
Wilson, Bowlin, Blake Reynolds and Mitchell DeJong rounded out the top-five finishers on the evening.
The next race will take place on May 10 at Dover Motor Speedway. Coverage begins at 9 p.m. ET on eNASCAR.com and Twitch.tv/iRacing.