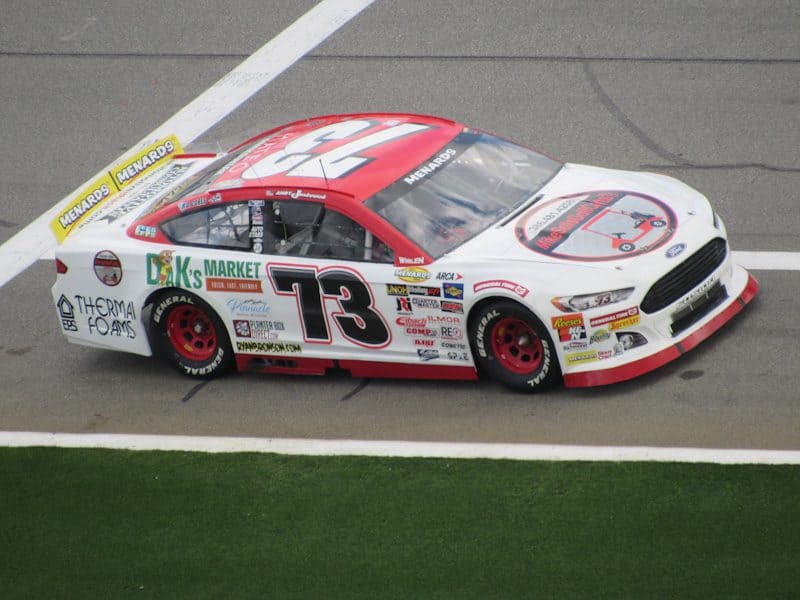 The top-four finishers in the 2021 ARCA Menards Series point standings were all age 21 and younger. Meanwhile, as the youth movement was on full display, 33-year-old Andy Jankowiak debuted in the series, competing in seven races.

The Tonawanda, New York-native earned four top-10 finishes with a then career-best finish of seventh place at Talladega Superspeedway and Pocono Raceway.

After finishing 20th in the standings last year, Jankowiak began this ARCA season with a new best finish of sixth place in the season opener at Daytona International Speedway.

Before ARCA heads back to Talladega on Saturday, April 23, Jankowiak spoke with Frontstretch contributor Trenton Worsham about his racing background as well as his involvement in the series.

Trenton Worsham, Frontstretch: Tell us about your racing background and how you got started.

Andy Jankowiak: It’s definitely a family affair. My mom, dad, and uncle raced so I was always around it. I was fortunate to have family connections to always be around it. I was on different pit crews and my Uncle Bob helped me start racing with modifieds and had some success there and just kept moving up. Every time I needed help I was just lucky that someone else was there to reach out.

Worsham: Was there a big-name driver such as Jeff Gordon or a Dale Earnhardt you wanted to be like when you were a kid and tried to emulate getting older?

Jankowiak: I was a Dale Earnhardt Sr. guy, I used to want to be like Alan Kulwicki but he was before my time. Also Rusty Wallace, but mainly ’90s Earnhardt.

Worsham: Why is the ARCA Menards Series right for you?

Jankowiak: It’s obtainable. We found a way to sustain ourselves right now. Have some sponsorship holes to fill up for some races, but we have been pretty lucky to have found some sponsors. I never planned on doing more than Daytona the first year, it was just something I wanted to do to say I did, but we kept going. We have some great people involved and we are fast, it’s hard to not want to keep going. It feels like we can win an ARCA race, which is my goal to go out and win one of these things.

See also
Who Will Become the Next ARCA 1st-Time Winner?

Worsham: With the goal to win, which tracks on your schedule this season do you feel you can win?

Jankowiak: I feel we can win all of them. We have a really good superspeedway program, my goal is to step up the intermediate program which was off last season. We aren’t doing wind tunnel testing and we race on a smaller budget so we have to put it in the right places. We have some great guys involved with Cup-level experience and that experience can help despite not having the money bigger teams do.

Pretty cool little read 😎 I am always proud of our efforts and it's always rewarding to see that our hard work is being noticed.@ARCA_Racing https://t.co/WNsSI8o7ni

Worsham: Taking the money and resources away, what are some struggles smaller teams do face that people may not know about?

Jankowiak: It really comes down to people. We have some volunteers and I put my time into it and when you’re on a smaller budget you have to pick your battles. If you have nine things needing to be done but can only pick three to help you the most, pick the three that are most important if you have time to go after the others. It’s also experience; guys like Venturini have been doing this for years and some of us are still learning. The more I can learn the more I can help us out.

Worsham: There has been lots of debate and discussion about drivers right now being more aggressive, especially the younger drivers in ARCA and the NASCAR Camping World Truck Series. With no deaths since Earnhardt in 2001, are the newer kids feeling safe and invincible? Where do you think this is coming from as an older driver?

Jankowiak: It’s hard to say, some would say I was aggressive especially when I was younger. The way I have looked at it is there’s a fine line between overtly aggressive and not aggressive enough and some days I step over the line and some days I don’t go hard enough. Being an older racer and coming from a different era I’m cognitive of when I do step over the line. The newer mentality seems to take it or leave it. Lots of that to me is a product of the points system in NASCAR because there’s no point in finishing in second anymore.

Worsham: Where can your fans watch you race this season for the rest of ARCA?

Jankowiak: Talladega, Charlotte Motor Speedway, Pocono, Bristol Motor Speedway, Michigan International Speedway, Watkins Glen International, and Kansas Speedway. We don’t have sponsorship for Pocono, Michigan, Bristol, and Kansas. If you do want to sponsor us we can work out some prices and help you out on social media. We can give you lots of value compared to other teams who run top 10. We can’t do it without sponsors.

I have been sponsoring Andy Jankowiak for the last year and let me tell you they are great people and really do a lot to promote my business. His is just a wonderful story of bringing a successful local racer to the forefront of motorsports and being super competitive in a sport where it’s very difficult to do well all with a lot less of a budget. It’s a great story and my business,Automotive Consultants,is with that team AJ all the way!

I’d like to see him get a shot in a Truck or Xfinity race.

when AJ and his crew chief Tom McGrath decided to Steal a modifed team from then team owner Bud Dreher ( Modified 12x) most in WNY racing area have turned their back on AJ ( advice : dont lend this team anything , as you will not have it returned)