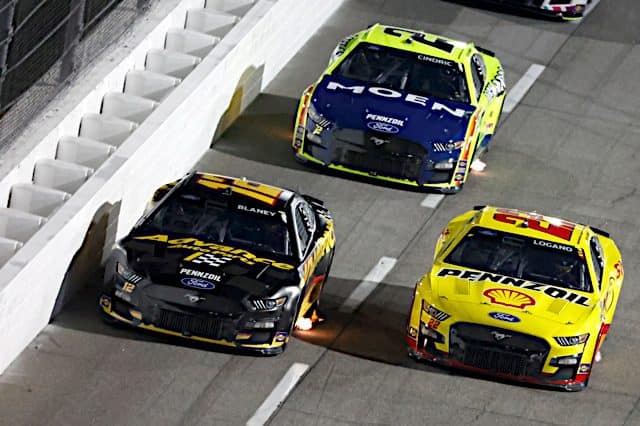 The Next Gen car debuted at another track this weekend and its first appearance went over about as well as a Southern debutante falling down the stair at her daddy’s mansion. Though she looked beautiful and appeared ready for the big day, the result seems to be that her grace and composure were no match for the marble stairs and her wonderfully clad feet.

Or maybe she had aero-push.

The rhetoric surrounding the new carʻs parade at Martinsville Speedway seems like it was compounded by the less than opulent performance she put on at her neighborʻs mansion, Richmond Raceway. Again, she dressed well and seemed ready to be in the spotlight but could not muster the easy charm to make every feeling that they were in the presence of a special entity.

Is our Southern Belle doomed? Will she ever recover? Is she fraught to stay coveted and besmirched by the adoring and angry men in her life? Surely, she looks to be in a troubled spot.

The southern belle is a frustrating and limiting way of constructing an identity. Anne Firor Scott was one of the first historians to dive into the subject of the southern belle and in it she discussed how the construct is problematized and limited. For Scott, the belle was a gilded cage, keeping women in a construct that was altogether too limiting while enabling southern men to use the trope as means for control, power, and violence.

While the historical implications of the southern belle continue to play out – as history is nothing more than a conversation between the past and present – then we can see how the new car is a reincarnation of this very concept. She is a marvel to behold and something to be controlled, and yet she is meant to be refined and enjoyed for our pleasure. She is supposed to be gracious in her existence and appreciate both our adulation and frustration, being ever faithful to providing a body worthy of our consumption.

The problem with this latest car is that it did not match the expectations at these short-track manors, these hallowed grounds where granddaddy set roots and began earning his fortune. How dare she behave this truculently! How dare she not follow the orders of her patriarchal overseers!

Somewhere along the line, NASCAR forgot that women have agency and that they will perform as to their desires. The overreaction to Gennie not giving everyone the show they expected at these venues may have something to do with daddy and all the decisions he has made more than her own doing.

Perhaps her daddy should have thought about how a chateau like Martinsville could fail to provide the needed warmth to make Gennie feel comfortable. Or how Richmond has some obvious need for renovations. Never mind these things, the sky is falling, and itʻs Gennieʻs fault.

The rapid and stunning change of narrative regarding the new car is somewhat amazing and, yet, should have been predicted from the start. Any kind of notable change brings with it backlash in some form at some point. While the early criticisms had been about the single lug nut, or that sheʻs not safe, or the lack of spare parts, these faults were set aside when she started performing well at many of the tracks on the schedule.

But now that Gennie has visited the short tracks and not lived up to some pedestalized version of herself, then there is reason to reconsider just what it is that daddy was doing in the first place. This sense of overreaction belies that Gennie is kin and that everyone goes through growing pains. Should not this whole season be seen as one gigantic test of the new car, for better and for worse?

There seems to be a disconnect between perception and reality regarding the new car and its performance.  Not so long ago, a cavalier Kyle Busch won Bristol and when asked his feelings about the Car of Tomorrow, he replied, “They suck.” And yes, there were problems with the CoT, but over time she evolved into something better and the short tracks became one of her better houses for showing face. But none of that was immediate.

While there may be a perception that Gennie can just be changed at will to provide the best racing at every villa, such a reality would be based in the culture of immediacy that feels better suited for gaming, where digital recreations are made at will. Sheʻs an actual product of which we barely know anything about at this point.

The reaction pieces over Gennieʻs failings this past week have proliferated in NASCAR circles and become the easy go-to topic for podcasts and anyone who is looking to knock her for failing to live up to their ideal.  Yet there has been little discussion about letting Gennie continue on her way and seeing how she does at other balls.  If she was something of a marveled at not long ago, winning favorable notice, then there is reason that she may again find her way to a lofty status.

All of the criticism seems to be something of a southern Scots-Irish bloodlust that sees no other target at the moment (save for Ty Gibbs and his transgressions as a coddled hyper-talented upstart). Give Gennie some time, maybe she will turn out to be everything the sport is hoping for; maybe sheʻll be able to provide some of the racing that so many fans sense they are missing.

Give her time to grow up.

And if in a couple of years she has not matured into the very ideal of a Southern belle, then she will probably have a sister to take her place.

A fun analogy. So after all that..what is wrong with the car? Can it be addressed?

To many of us want every race to be 5 cars, side by side coming out of turn 4 for the checkered flag. Racing has never been that on any level. You bide your time and you will see a good race here and there.

A lot of people were hoping the southern belle would go to Martinsville and get into a bar brawl and were disappointed when that didn’t happen. But sometimes short tracks can be fairly tame. Way back in 1971 Bristol went caution free. Charlie Glotzbach won that race and was three laps ahead of second place. The short track sample size on the new car is still to small to pass judgement.

Echo
Reply to  JD in NC

Martinsville was still a totally boring race and every racer said you couldn’t pass anybody. What makes you think it’s going to be different next time ! Nascar isn’t going to change anything because all the parts come from one company and they can’t keep up with parts now. Change anything at all and your asking for more supply line shortages.

JD in NC
Reply to  Echo

I didn’t say it wasn’t boring, it downright sucked. I often go to Martinsville and was glad I didn’t go this time. I also didn’t suggest NASCAR change anything, although they have already beefed up the rear toe link because so many people were bending them after contact. I also didn’t predict that Bristol would be great this weekend. I just pointed out that there’s no need to panic after two boring short track races. To reiterate, two races is too small a sample size. COTA was a good race and it has some short track characteristics.