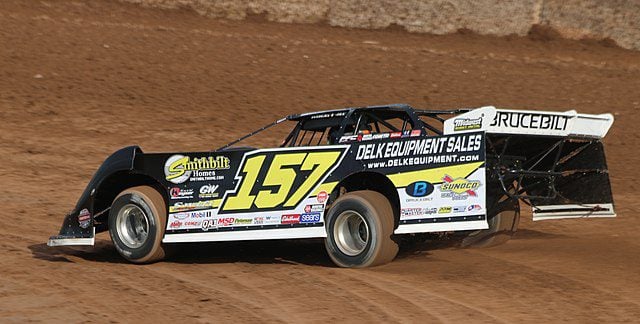 Mike Marlar scored his biggest win since securing the Wild West Shootout finale in January, grabbing $20,000 in the inaugural Kyle Larson Late Model Challenge Thursday night by leading all 50 laps from the pole.

Marlar went unchallenged all race long, but the battle for the rest of the top five raged for much of the evening. Jonathan Davenport faded after briefly getting around Kyle Larson near the midpoint, leaving Tennessee drivers Jimmy Owens and Scott Bloomquist to both get past Larson late in the event, scoring a 1-2-3 sweep in the Volunteer State.

Track promoter Vic Hill announced following Thursday’s feature that the crowd was the largest seen at Volunteer Speedway in 20 years. While the front grandstand was not full, vehicles were lined up to enter the track’s tiered pitside parking area more than six hours before hot laps were scheduled to begin.

Chalk one up for the Volunteer state, because home-state drivers owned the night. Marlar’s win was his second feature of 2022 worth at least $20,000. Meanwhile, Owens prevailed over Larson in a protracted battle in the top five. And not only did longtime veteran Bloomquist finish third, he also told the crowd post-race that the leg numbness issue that plagued him for the 2021 season did not occur, a welcome sign after offseason surgery.

It’s an all TN podium here at @TheGap_VolSpdwy as Newport’s @JimmyOwens_20 is your runner-up finisher and Mooresburg’s @Bloomquist_0 lands in 3rd. 👀 pic.twitter.com/ypCHCI1K8W

Cory Hedgecock rebounded after a power steering failure cost him a shot at qualifying his No. 23 car to win a B-main and finish 12th in the feature, one of only three drivers in the field to advance more than four positions during the 50-lap feature.

Hedgecock’s issues in qualifying buried him in a way that sunk his shot at making real noise at Volunteer. That’s a shame, as with five wins already in 2022 Hedgecock has been throwing his weight around (he won the Sweetheart at 411 Speedway back in February).

The carnage of Thursday’s event was largely confined to the sportsman late model class, but Kyle Strickler endured the harshest wreck for a super late model driver in the second B-main, a victim of an accordion wreck.

Chaos at the start of B Feature #1!@tezos | @TheGap_VolSpdwy pic.twitter.com/1TiRnVpKWb

Flagman Chris Tilley did something that I’ve pondered for the entire two decades I’ve watched racing but have never seen happen until tonight. The caution flag flew during Thursday’s feature because the flagman dropped the caution flag from the stand.

Just when you think you’ve seen it all, the caution flag actually flies onto the race track… 😂

William Byron spun out during hot laps and had to be pushed back to the pits. Running at the back of his heat and B-main, Byron was granted a provisional into the starting field, where he was lapped early and completed about 20 laps before parking for the night. NASCAR social media didn’t do him any favors.

lol. Putting on a show. Byron finished last in the heat race and last in the Bmain and was awarded a provisional. 🤦‍♂️🤦‍♂️🤦‍♂️

Kyle Larson posted the overall quick time in qualifying and won his heat race before running second for most of the feature Thursday night. Larson faded to fourth in the closing laps after failing to dispatch of lapper Garrett Smith, allowing Owens and Bloomquist to steal positions.

Volunteer Speedway is 51 miles from Bristol Motor Speedway and drew more cars for a $20,000 race on a weekday than the Bristol Dirt Nationals did either weekend racing for $50,000 four times. RaceXR would do well to take notes on how this event was promoted, as everyone from local racers to NASCAR’s social media channels knew this race was happening and tuned in for it. Or maybe Larson really is just that popular.

Though in fairness, the stats suggest that the race wasn’t nearly as competitive as the top five made it seem. Seven of the top-10 starters finished there, with the race’s hard charger (Knuckles) only advancing seven positions in 50 laps. Tennessee’s obsession with banked tracks makes for great optics, but the passing does seem a bit lacking.

I’m hypothesizing about some of this based on the final scoresheet because Flo Racing’s coverage was REALLY top-heavy, with the cameras seldom leaving the top five except for incidents during the 50-lap feature. Now, yes, Larson, Owens and Davenport did put on some racy displays within that top five, but split screen is a real thing and doesn’t seem like too much of an ask for an event that had top billing on Flo.

Clint Bowyer remarked during his latest over the top rambling display of oratory violence that the Flo crew had given him vodka over the course of the race night. Had he not said anything, would anybody have noticed? Because drunk Bowyer sounded an awful like like NASCAR on FOX Bowyer. And no, that’s not a compliment.

One more note on Bowyer. To listen to Bowyer agree with the Flo Racing crew that all forms of motorsports need each other, only to minutes later remark that late models were real racecars while sprint cars were “space shuttles” because of their wings was about the level of intellect I’d expect for some trying to outdo Terry Bradshaw for volume.

Fortunately, Knoxville Raceway regular Brian Brown had something more constructive to say about sprint car racing, quick to make clear that he wants to see the 410 sprint cars get in on the ever-expanding list of big-money midweek features that are dotting the super late model landscape.

How soon can I promote A Sprint Car Night in America

Wednesday Nights are for Racing

I’d strongly encourage everyone to read the thread of responses below Brown’s tweet. Yes, there is an appetite for a midweek sprint car challenge, but I will admit if it’s true that the World of Outlaws would prevent their regulars from competing that it could be a much harder sell of a race. Credit to Larson and Flo, the field of late models they assembled at Volunteer was not just high in car count, the quality was there, too.

Catching a race from the tiered parking area at Volunteer is definitely on my bucket list after seeing the line of pickup trucks packing the pit area Thursday night. Note to all dirt tracks out there, if there is any way to make this happen at your venue, get on it. The backstretch view of Volunteer was quite the spectacle.

Where it Rated (on a scale of one to six cans with one a stinker and a six-pack an instant classic): We’ll give the Kyle Larson Late Model Challenge four and a half shots of whatever vodka Bowyer was chugging. The race could have been more competitive and if I never hear Bowyer in a dirt booth again it’ll be too soon, but the program was run a relatively smooth fashion, assembled a tremendous field of cars and felt like a big event. A very welcome way to spend a Thursday night.

Up Next: The Bill Corum Memorial at Tazewell Speedway not too far removed from Volunteer will go off Saturday night for $21,000-to-win for the super late models. Coverage can be found on Flo Racing.

This is my favorite dirt track in the country. The banking is amazing, the track prep is first class, and they always have strong car counts. Even when it rains/had rained, they try so hard to get it in. They always draw well for attendance.

I do wish Flo covered more of the racing in the field. Sometimes theres a ton of passing and slide jobs other times not as much. Ive seen a lot of Super Late Model races here. Just a few years ago, I was at one that had the largest crowd attendance in X years, but that was beaten tonight.

I’m so happy to see the huge crowd and massive coverage for a track that has rumors about it being sold. I actually didnt mind Bowyer at all. He was funny, and also serious at times and actually knew the drivers.

I plan on attending this next year. I’m not a Kyle Larson fan, but I love what he is trying to do for dirt LATE MODELS. Would LOVE to see another sprint car show here. Its WILD!