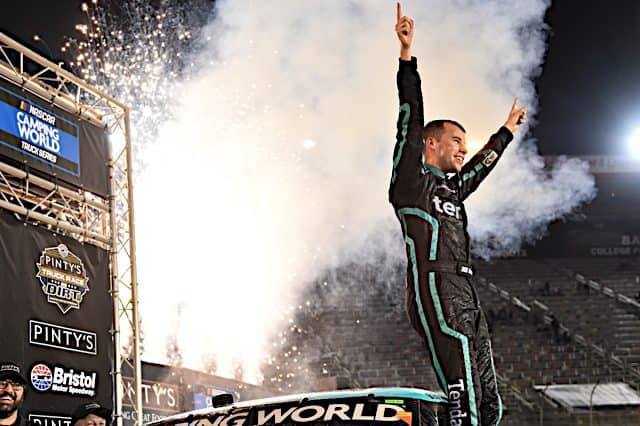 It was a full day of racing Saturday (April 16) at Bristol Motor Speedway, capped off with the Pinty’s Truck Race on Dirt. When the dust settled, the smoke cleared and the trucks got unstuck, it was Ben Rhodes who claimed supremacy, winning the first two stages and rallying late to win the race as well.

The field was set by a card of four heat races, resulting in Joey Logano and Rhodes grabbing the front row. Logano started on pole but was no match for Rhodes as he took the lead on the first lap. Andrew Gordon spun with 13 to go in the opening stage to bring out the first yellow, and on the restart, Rhodes pulled away to take the first stage from Ty Majeski, Stewart Friesen, Logano and Chandler Smith.

On the round of pit stops after stage 1, Rhodes, Majeski and Austin Wayne Self stayed out, putting them in the top three spots to start stage 2. Once again, it was Rhodes that took the lead early on. Kris Wright would bring out the third yellow (second for cause) at lap 55.

On the ensuing restart, Rhodes took the lead from teammate Majeski and proceeded to pull away to win stage 2. Majeski, John Hunter Nemechek, Parker Kligerman and Logano. The stage win was Rhodes’ fifth of the season, leading the Truck Series.

But the stage win came with a price as he, Majeski and Self had to come down pit lane at the end of the stage, ceding the lead to Nemechek.

For the final stage, Nemechek led the field to green, but didn’t stay there for for long as Carson Hocevar took the top spot soon after. After a lap 98 caution for Matt DiBenedetto and Self getting stuck together and a six-minute red flag, Hocevar went back on his tear, and though he survived an attack from Nemechek, he couldn’t stave off a late challenge from Rhodes as he completed his sweep.

“I thought we gave it away for a moment,” Rhodes said during his post-race interview. “Driving back through the pack was way tough, not something we wanted to do. Really, really proud of all [the team’s] effort.

Next up for the Camping World Truck Series is a date with the Lady in Black — Darlington Raceway — for the Dead-On Tools 200 on Friday, May 6. FS1 will have coverage that night starting at 7:30 p.m. ET with radio coverage provided by Motor Racing Network.

When I checked the results I noticed that NA$CAR is getting more creative on counting laps during the TV time outs. They came after laps 40 and 90 and the laps under caution were listed as 41-41 and 91-91. TSN had tape delay coverage from 10-12 and I saw how they did it during the second TV time out. They got the lap counter to 92 and stopped counting the laps until they restarted the race on lap 92. I can’t wait to see what they do during the Cup example of Brian’s product..