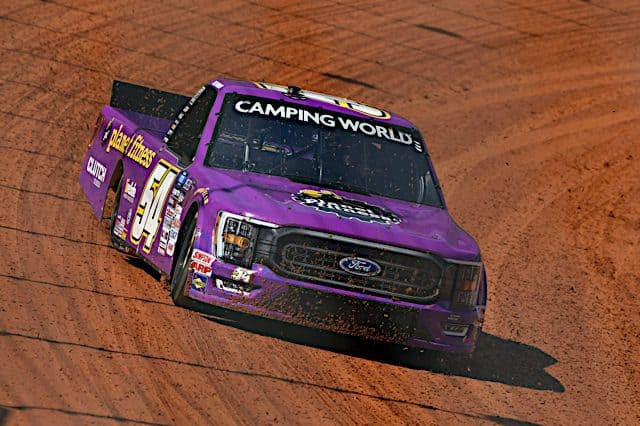 The stars of the NASCAR Camping World Truck Series got down to business Saturday (April 16) at Bristol Motor Speedway to set the field for the Pinty’s Truck Race on Dirt.

While the opening heat wasn’t nearly as messy as last year, the first of the four qualifiers featured overheating issues for drivers Tanner Gray and Buddy Kofoid. It was a Cup Series regular and dirt track specialist that dominated, though, as Austin Dillon won heat 1 after leading all 15 laps.

Ty Majeski held off a late charge from Carson Hocevar to claim victory, also leading all 15 laps of the heat.

“I was skeptical coming into this weekend,” Majeski said. “You gotta search for the moisture. It’s a fun challenge.”

Grant Enfinger started on pole for a wild race, with former ThorSport Racing teammate Ben Rhodes going on the attack early. The No. 99 went three-wide with Norm Benning to gain spots, while Hailie Deegan started at the rear due to driving a backup truck. Deegan was initially slated to start fourth, but spun around the halfway point of the race while battling Benning and Matt DiBenedetto.

However, it was the defending Food City Dirt Race winner — and another Cup regular — in Joey Logano grabbing the lead from Enfinger on the ensuing restart and claiming the third of the four heat races.

Rhodes followed with Enfinger in tow, while Christian Eckes and DiBenedetto rounded out the top five. Kaz Grala, Deegan, Kris Wright and Benning filled out the rest of the running order.

“It was a little wild,” Deegan said. “This ain’t a dirt track. It was a different feeling for me.”

A stacked lineup, led by former Cup Series champ Chase Elliott, rolled to green with Chandler Smith on pole. Like the first two heats, the eventual winner dominated as Eckes held off the No. 7.

“We didn’t know how it was really going to be because it was really moist out there,” Smith said. “Look forward to the main event.”

By virtue of points accumulated throughout the heats, Logano and Rhodes will share the front row for the Pinty’s Truck Race on Dirt. Jessica Friesen and Benning missed the main event.

Fox Sports 1 will have coverage of the Pinty’s Truck Race on Dirt starting at 8 p.m. ET on Saturday, April 16th with radio coverage provided by the Performance Racing Network.