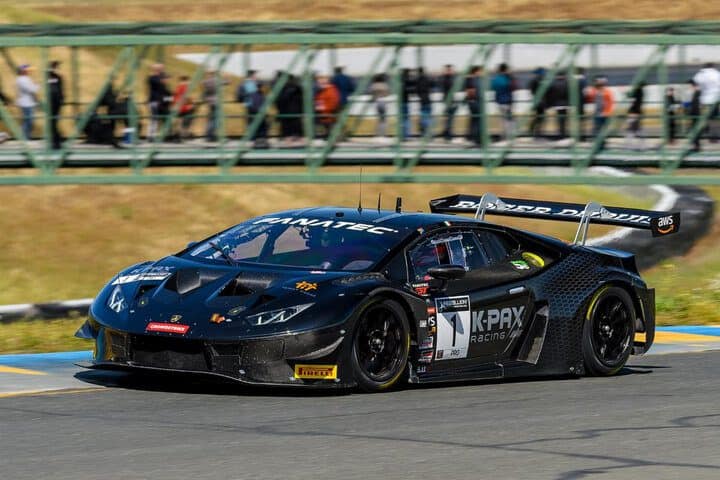 For K-PAX Racing, Sonoma Raceway is home.  Andrea Caldarelli and Jordan Pepper made good use of the home cooking to earn the weekend sweep in the opening weekend for Fanatec GT World Challenge America Powered by AWS.

Saturday’s race saw Pepper start his Lamborghini Huracan GT3 on pole and immediately gap Russell Ward in the Winward Mercedes.  Meanwhile, the Ferrari of Jean-Claude Saada spun exiting turn 1a, taking DXDT Racing’s David Askew with him.  Both were able to continue.

Pepper took no time to pull out a decent advantage.  He was nearly four seconds ahead at the end of the first lap and almost 15 seconds in front after 10 minutes.

Behind Pepper, Ward had his own battle for second with US RaceTronics’ Steven Aghakhani.  Aghakhani was able to get past for second, then heavily defended the position.  This prompted a warning from the officials for blocking.

By the time the pit window opened up 40 minutes into the race, Pepper’s lead was 42.682 seconds.  That actually meant that the window opened for the rest of the field a lap earlier than it did for Pepper.  Given the abrasiveness of Sonoma Raceway’s track surface, nearly everyone pitted as soon as they could for the new rubber, in addition to a driver change.

Staying out an extra lap did cost K-PAX Racing some time.  Caldarelli exited the pits with a 39-second lead over Philip Ellis in the Winward Mercedes.  Still, this was a very comfortable margin.

The margin of victory was originally 51.886 seconds over Ellis and Ward.  However, the Winward team was hit with a three-place penalty after the race for a violation.  As a result, the official margin of victory is 78.405 seconds over Aghakhani and Loris Spinelli.  The No. 3 K-PAX Racing Lamborghini of Giacomo Altoe and Misha Goikhberg was third, then Turner Motorsports’ Michael Dinan and Robby Foley.  The penalty dropped Ellis and Ward to fifth.

In Pro-Am, a couple of changes in classification changed the outcome for the weekend.  K-PAX Racing’s No. 3 Lamborghini for Altoe and Goikhberg, along with the Turner Motorsport No. 96 BMW for Dinan and Foley were elevated to the Pro class between qualifying and the race.  These were the top two qualified cars in the class.

As a result, BimmerWorld Racing’s Chandler Hull started from the pole in his BMW.  However, Wright Motorsports’ Charlie Luck didn’t spend much time to take the advantage away.  Luck, the defending GT America Powered by AWS champion, took the lead on the first lap.  Hull continued to pressure Luck, but was unable to get the lead back.

As for Askew, his day went from bad to worse after he slid off-course in turn 6 and nosed into the tire barrier 30 minutes in.  Askew was able to drive back to the pits for repairs, but the team made the decision to retire the car at that point.

Heylen and Luck ended up sixth overall and beat Braun and George Kurtz by just 0.621 seconds.  Hull and Auberlen were a lap down in third, then Zelus Motorsports’ Corey Lewis and Jeff Burton.  ST Racing’s Samantha Tan and Nick Wittmer were fifth.

In the Am class, Saada’s spin on the first lap put the team at the rear of the field.  Saada was able to make progress before handing over to Conrad Grunewald.  Grunewald was able to run down Triarsi Competizione’s Onofrio Triarsi with 25 minutes to go.  Grunewald took the lead in turn 7, then blew the chicane 20 seconds later and gave it back.  Grunewald ultimately took the lead when Triarsi got loose exiting turn 6 with 14 minutes to go.  From there, Grunewald pulled away to give himself and Saada the Am win by 9.842 seconds over Triarsi and Charlie Scardina.

By virtue of qualifying on a drying track Saturday morning, Spinelli started his Mercedes Sunday afternoon (April 17) on the overall pole with Caldarelli alongside.  At the start, Spinelli was able to pull out a small advantage, but Caldarelli showed that he had the faster car as he slowly reeled Spinelli back in.

What followed was a fierce battle for the overall lead between Spinelli and Caldarelli.  Caldarelli pressured Spinelli hard, but could not get past the Mercedes.  It was the mid-race pit stops that changed everything.

In Fanatec GT World Challenge America Powered by AWS and Pirelli GT4 America SprintX, teams have a minimum pit delta rule that varies by track to track due to pit road length.  At Sonoma Raceway, that minimum time was 87 seconds to drive the length of the pit lane and perform your service.  However, teams are allowed a one second “joker” once per weekend.

K-PAX Racing, in changing from Caldarelli to Pepper, used this joker.  An 86.5-second time from line to line allowed them to jump over the US RaceTronics Mercedes and take the overall lead.

If that were the only issue for US RaceTronics, then they would have likely been ok.  However, on the out lap, Aghakhani slowed exiting turn 6 with a tire issue.  Effectively, the wheel was cut into two pieces.  A quarter of it was still attached to the tire, while the other three-quarters was separated.  As a result, Aghakhani had to limp his Mercedes for half a lap back to the pits in order to get a replacement tire and wheel.  By the time this was done, Aghakhani was a lap down.

Shortly after the stops, DXDT Racing’s Scott Smithson spun exiting turn 4 and got himself stuck in a combination of moist grass, mud and a culvert.   This brought a full course caution that closed up the field.  Smithson’s Mercedes was not damaged, but it took quite a while to get the Mercedes extricated.  Smithson and teammate Bryan Sellers would continue, but they would finish at the rear of the field, six laps down.

The green came out with 26 minutes to go.  Pepper simply drove away from the pack.  It was not as expressive as what the team did on Saturday, but it was an impressive drive to victory.

Caldarelli and Pepper’s margin of victory was 21.753 seconds over Ward and Ellis, who inherited second after Aghakhani’s issues.  Altoe and Goikhberg were third, then Dinan and Foley.  Aghakhani and Spinelli were fifth in class, but a lap down in 17th overall.

In Pro-Am, Racers Edge Motorsports’ Mario Farnbacher won the class pole with a lap good enough for fourth overall.  In the early laps, he was able to get past Altoe for third overall.  Altoe heavily pressured Farnbacher so that he could get the spot back.

16 minutes into the race, Altoe got alongside Farnbacher headed into the chicane.  Contact was made and both drivers slid off the track into the mud and dirt.  Altoe was able to get the position, but Ellis got alongside for position.  Side-to-side contact was made multiple times between Altoe and Ellis before Ellis took the spot in turn 11.  At the same time this was happening, Heylen was able to get past Farnbacher to take the Pro-Am lead as Farnbacher dropped to sixth overall.

Heylen held onto the Pro-Am lead until the pit stops, where he gave way to Luck.  Luck had a substantial lead prior to the caution and ran as high as fourth overall before some of the Pro teams were able to get back past.  However, Luck had to contend with Racers Edge Motorsports’ Ashton Harrison in the closing laps.

Harrison was able to run Luck down from three or four seconds back to get to his rear bumper with seven minutes remaining.  However, Luck was able to hold off Harrison’s charge to score the Pro-Am sweep for himself and Heylen.

Heylen and Luck finished fifth overall and ended up 1.079 seconds ahead of Farnbacher and Harrison.  Braun and Kurtz were third, followed by Tan and Wittmer.  TR3 Racing’s Ziad Ghandour and Michele Beretta were fifth in their Lamborghini.

In the Am class, Saada and Grunewald led flag-to-flag to take the win.  The caution after the stops put them a full lap ahead of the Triarsi Competizione Ferrari.

Fanatec GT World Challenge America Powered by AWS teams will take a month off before returning to action at a new venue.  The new Ozarks International Raceway near Gravois Mills, Mo. will host the second weekend of the year the weekend of May 20-22.