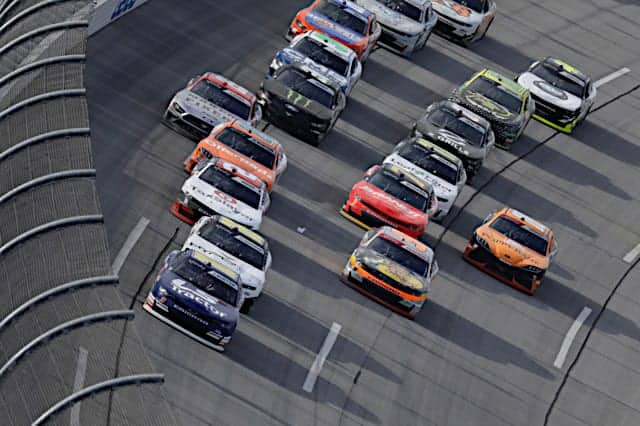 The NASCAR Xfinity Series returns after a one-week hiatus to the high banks of Talladega Superspeedway.

Forty-one drivers are entered for 38 spots, so three drivers won’t qualify, as long as nothing changes to the entry list.

Natalie Decker will attempt to make her second start of the season with MBM Motorsports. Decker will pilot the team’s No. 13 Toyota.

Drew Dollar makes his second Xfinity start with Joe Gibbs Racing in the No. 18 Lynx Capital Toyota. It will be Dollar’s first appearance since the season opening race at Daytona International Speedway.

Currently sitting second in the NASCAR Camping World Truck Series standings, Chandler Smith will look to make his series debut with Sam Hunt Racing. Smith will climb behind the No. 26 ChargeME/VITAL Toyota.

Jesse Iwuji is listed in his own No. 34 after Kyle Weatherman piloted it at Richmond Raceway and Martinsville Speedway.

CJ McLaughlin returns for the first time since Las Vegas Motor Speedway to attempt his third start of the season. He will be in RSS Racing’s No. 28 SciAps Ford. Kyle Sieg will be in the team’s No. 38 A-Game Ford.

Alpha Prime Racing will attempt to field Ryan Ellis and Caesar Bacarella in its cars this week. Ellis will take the reins of the No. 44 Heartbeat Hot Sauce Chevrolet while Bacarella will pilot the No. 45 Lilly Finance Chevrolet.

After fielding Jade Buford in the first eight races, Big Machine Racing attempts Talladega with Kaz Grala behind the wheel of the No. 48 Big Machine Spiked Chevrolet.

Shane Lee will attempt to qualify the No. 53 Kitty Kat Coin Ford for Emerling Gase Motorsports. Lee has made three starts with EGM behind the wheel of the team’s No. 35 entry.

Xfinity drivers will tackle the draft on Saturday, April 23 at 4 p.m. ET on FOX.