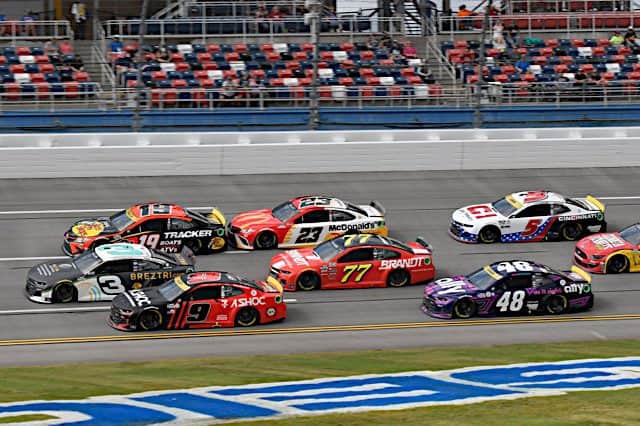 Thirty-nine drivers will look to avoid the Big One and capture the trophy. Each driver is guaranteed a spot, barring any late entry list changes.

David Ragan is back with Rick Ware Racing in the No. 15 Envision Ford. The 2013 winner of this race will make his third start of the season, which included a top 10 superspeedway run at the Daytona 500.

Daniel Hemric also returns to the series with Kaulig Racing in the No. 16 Majestic Steel Chevrolet. It will mark Hemric’s third start this season and first since Auto Club Speedway.

Greg Biffle will hit the track again with NY Racing Team. Biffle will make his fifth start in the No. 44 Chevrolet.

After piloting the No. 15 for RWR at the Bristol dirt race, JJ Yeley switches to the No. 55 Ford for MBM Motorsports.

Spire Motorsports brings Landon Cassill back for the first time since Richmond Raceway to pilot its No. 77 FOX Nation Chevrolet.

After Josh Williams made his Cup debut in the Bristol dirt race, Live Fast Motorsports team co-owner BJ McLeod returns to the seat in the No. 78 Motorsport Games Ford.