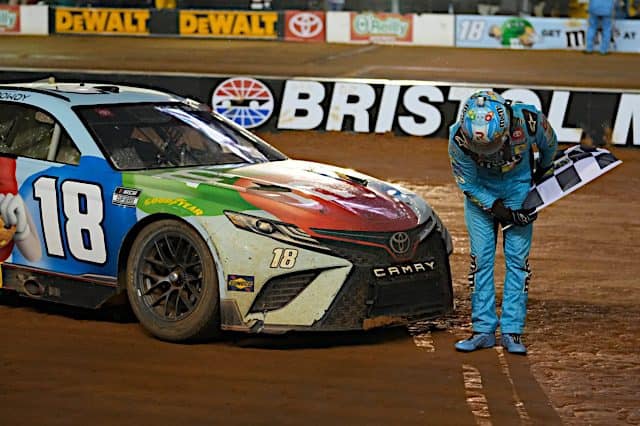 Tyler Reddick charged into turn 3 Sunday night (April 17) with a 2022 Bristol Dirt Race victory in sight. Chase Briscoe was determined to slide in front of him before he got there.

Instead, contact left them spinning, opening the door for Kyle Busch to take advantage on a wild night at Bristol Motor Speedway.

The finish seemed appropriate on a night with 14 cautions in 250 laps of racing, two rain delays and even a controversial scoring decision that looked at one point like it might affect the outcome of the race. Briscoe’s slip-up in the final turn wound up denying Reddick his first career Cup victory, opening the door for the 60th win of Busch’s career instead.

Boos rained down from the crowd at Bristol as the unexpected twist ended Busch’s 25-race winless streak.

“I feel like Dale Earnhardt, Sr. now. This is awesome,” Busch said. “And I didn’t even do anything.”

Busch has now tied Richard Petty’s all-time record of 18 consecutive seasons with a Cup victory. His good fortune came after Reddick and Briscoe, both dirt veterans, put on a clinic over the final 24 laps. It came down to a duel between two, Briscoe charging hard and Reddick doing all he could to keep him at bay.

After closing in through lapped traffic throughout the final 15 circuits, Briscoe got right to the bumper of Reddick as the white flag waved and pulled a kamikaze slide job into turn 3, knocking both leaders into a spin down the banking.

Reddick looped the car around and gunned it off the turn 4 apron, but Kyle Busch, who had been running a distant third, was just close enough to squeak past Reddick and score the checkered flag.

A disappointed Reddick said of the finish, “I shouldn’t have let [Briscoe] get that close,” before Briscoe, in the spirit of the holiday, interrupted the interview to apologize for the move that cost both of them the trophy.

SUCH a cool moment between @TylerReddick and @ChaseBriscoe_14 here. During Reddick's interview, Briscoe comes up, apologizes and the two shake hands and discuss the incident that led to both spinning on the last lap.

The men shook hands and left on good terms, each accepting what caused their defeat.

“I shouldn’t have let him get that close,” Reddick said after seeing his Cup winless drought tick up to 0-for-83. “He ran me back down. It made it really exciting for the fans.  I’m disappointed that we couldn’t win, but proud of this team for all of their hard work, and it was great to be able to run up front all race and lead the most laps of my Cup Series career.”

The race was action-packed from the start. Stewart-Haas Racing’s Cole Custer led the field to green, accompanied by a “boogity boogity boogity” for old time’s sake from FOX guest commentator Darrell Waltrip. But Custer never led a lap, forced to pit road before the first caution for dirt that piled up on his grille. NASCAR threw the yellow as other drivers experienced problems moments later; however, Custer never earned his track position back. He wound up 13th.

That opened the door for Briscoe. He led until lap 49, when he spun in turn 4 due to a flat right rear tire. Kyle Larson then jumped out in front until the end of stage one, scoring his first stage win of the season.

Three cars then stayed out during the first set of non-competitive pit stops, including the two Trackhouse Racing Team Chevrolets of Daniel Suarez and Ross Chastain. Each driver was hoping to maintain track position until the race became official at the lap 125 halfway mark due to the threat of rain in the area.

Suarez held the lead through restart after restart until lap 140, when Briscoe went to the point for the second time of the night. As the drizzle started to come down, driver No. 14 gapped the field, and went on to finish first in stage two for the first time in his career.

After the second set of non-competitive pit stops, chaos broke loose. Expecting rain, 16 drivers stayed out as the rest of the field, including the leaders Briscoe, Bell and Suarez, came in for service. When the red flag came out for rain, however, Briscoe was still scored as the leader.

After the initial confusion, it was eventually explained that this race’s unique pit stop procedure meant that any change in position under caution would only be scored when, or if, the track went green again.

Thankfully, after a not-so-lengthy delay, the field got going once again with 100 laps to go. Tyler Reddick immediately went three-wide through the middle of turn 2 to take the lead from Kyle Busch and Joey Logano, a lead he would hold for the next 99 laps and a flurry of final stage cautions. Among the drivers caught up in incidents were Kurt Busch, Ricky Stenhouse Jr. and even Suarez, who never regained his earlier track position.

In the end, the battle for the win came down to Reddick, Busch and Briscoe before the No. 18 faded a bit in the closing laps. But it turned out third place was the perfect position to be in once the two drivers ahead of Busch started fighting.

Another one in the @BMSupdates trophy case… backed into that one 😄🏁 pic.twitter.com/2A5VEMMXxY

Gee, Kyle won just like Alex Bowman did. I guess it’s okay when he does it.

Isn’t it great when Baby Busch gets foot-in-mouth disease?

I agree. The race was OK, not great and the ending really sucked. Reddick deserved to win that race.

I thought Briscoe deserved to win based on how he came back through the field but Reddick was ahead at the end of the event. Those cars on dirt (and on pavement) are like fish out of water

I’m surprised NASCAR didn’t throw the yellow flag instead of the checker flag being that the two lead cars spun out in front of the entire field. They have done it before this year. It would of been Reddick and Busch on the front row for the GWC finish.

Kicks
Reply to  Tom B

Once the leader takes the white flag, the next flag ends the race whether its a yellow or a checker. Same rule applies in GWC restarts.