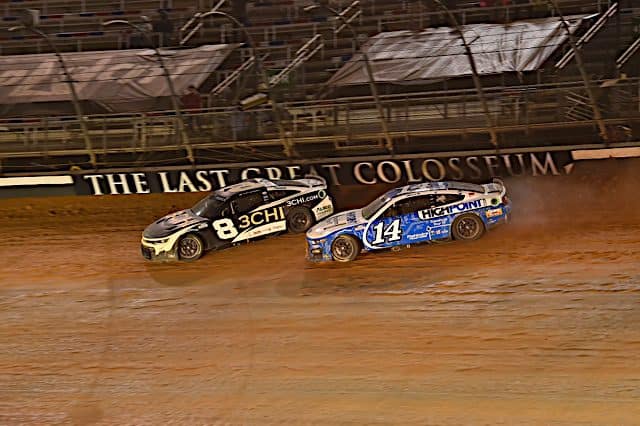 Chase Briscoe was steadily closing in on Tyler Reddick as the NASCAR Cup Series’ Food City Dirt Race at Bristol Motor Speedway wound down, catching the No. 8 Chevrolet with mere laps remaining.

In the final corner of the 250-lap event and with just a few hundred feet between them and the checkered flag, Briscoe went for a dive-bomb slide job and collided with the No. 8, sending both machines spinning. Reddick’s car did a full 360-degree loop and he gunned the engine toward the finish while Briscoe ended up backward, but the Richard Childress Racing driver was passed by Kyle Busch mere yards before the line. Busch won, while Reddick finished second and Briscoe 22nd.

Wow. Retweet to congratulate Kyle Busch on his win at Bristol! pic.twitter.com/1P4CkhNkYR

Once the rain cleared, dust settled and paint had been traded, neither Reddick nor Briscoe were in victory lane, but the incident led to a remarkable moment of sportsmanship bewteen the two competitors.

“I don’t think I did everything right, to be honest with you,” Reddick told FOX Sports after the race. “Briscoe was able to run me back down there and, just looking at it, I should’ve done a little bit better job of just … I don’t know. I shouldn’t have let him get that close. He ran me back down, he worked really hard to do that.

“I mean, you’re racing on dirt, going for the move on the final corner,” he added. “It’s everything that — as a driver — you hope to battle for in his [Briscoe’s] situation, and it made it really exciting for the fans. So it does suck, but we were able to finish second still and, if I’m being honest, I should’ve done a better job and pulled away so he wasn’t in range to try and make that move. That’s how I look at it.”

As Reddick finished his interview, Briscoe walked up and the two exchanged a handshake and a smile. What followed was a good-natured conversation between the two racers with significant backgrounds on dirt.

“Hey, you did a hell of a job running me down,” Reddick responded.

“I kept trying, I was driving it so hard,” Briscoe said. “I couldn’t run it any harder. I’m sorry. I wish you would’ve won.”

“It’s all good,” Reddick said. “I needed to drive away and I let you get close, so that’s on me.”

Briscoe added another apology and Reddick responded in turn.

“That was fun, though,” Briscoe said, to which Reddick responded with a “’til next time,” and the two parted ways with smiles and another handshake.

Reddick had even commented on it via radio communications with the team right after it happened, saying he “would’ve done the same shit” had he been in Briscoe’s shoes.

"I would have done the same shit honestly." – Tyler Reddick.

At different points in the race, both drivers appeared destined to win the second-ever Cup dirt race at the Last Great Colosseum. Both were also leaders at different points when rain forced the field down pit road.

For Reddick, a first career win that had seemed possible and subsequently eluded him multiple times in 2022 slipped away yet again. The No. 8 led 99 circuits and pulled away as Briscoe and Busch battled, that duel unfolding after the final stoppage for rain.

Briscoe led a chunk of the night and bounced back from a spin from the top spot early on, seeming to be in prime position to win his second race of the season and career during the longest rain-induced red flag. The No. 14 was out front for 59 laps, including the confusion-riddled stoppage when it was unclear if Briscoe or Busch were leading.

After escaping Busch during the final sprint, Briscoe closed in rapidly on Reddick, losing ground several times when the No. 14 ventured too high but gaining nonetheless. The two ended up nose-to-tail with the white flag waving above them and side-by-side within view of the checkered, yet neither made it there in the position they were in when they entered the corner.

Last 10 laps was the hardest I’ve ever ran a car in my entire life. Tried throwing a slide job on the last corner and knew as soon as I went into the corner I was spinning out with how much speed I carried… hate that it got Tyler in the process. Appreciate Tyler’s understanding.

Briscoe still has one win, locked into the playoffs via his triumph at Phoenix Raceway. Reddick has already multiplied his career-best laps led total nearly five times over, recording four top 10s so far after contending for wins at Auto Club Speedway, where he led 90 laps, and Phoenix, where he, Briscoe and Ross Chastain duked it out late in the desert for a victory that would’ve been any of the trio’s first in Cup competition.

Briscoe won that afternoon and Chastian followed at Circuit of the Americas two weeks later, while Reddick is still waiting for his maiden trip to victory lane in the Cup Series. His next chance will come at Talladega Superspeedway, where he scored an Xfinity Series triumph in the spring of 2019.