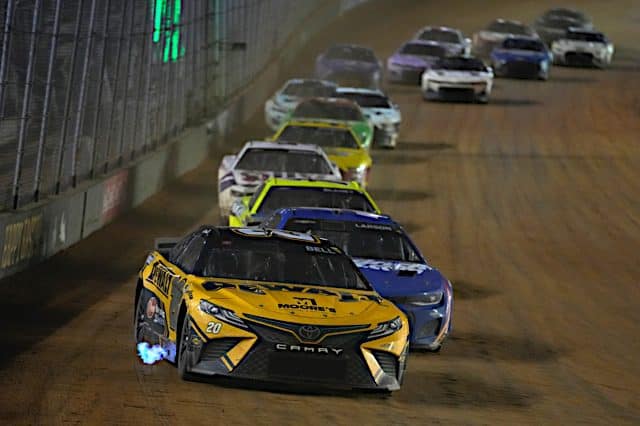 Bristol Motor Speedway’s transformation into a dirt track is no longer a one off for NASCAR. This weekend marked the second time the track hosted races for the NASCAR Cup and Camping World Truck series on a temporary dirt surface. In fact, NASCAR took the event one step further in 2022. This season’s Bristol Dirt Race moved to Easter, running on Sunday night. It marks the first time that the Cup Series has run a race on Easter Sunday in over 30 years.

Given the schedule change, it feels like the dirt race has all the trappings of a major event. Just like Memorial Day and the Coca-Cola 600, or the summertime Daytona International Speedway race held on or around Independence Day for decades, NASCAR is trying to create another signature holiday weekend race. The new date on the schedule, the nighttime atmosphere and of course the dirt has certainly changed the profile of what was formerly Bristol’s spring race. But behind all the fanfare and hype for seeing NASCAR race on dirt, losing the traditional spring Bristol race was a price that too many people in the industry overlooked.

Bristol’s spring race was a valuable part of the Cup Series schedule. It was one of only six short track races and one of two stops at a truly unique venue on the NASCAR calendar. Obviously, the late summer night race was always going to be the track’s marquee event. But when you strip away the pageantry of the night race, the type of racing that occurs in that event is no different than what Bristol offered in the spring. You could even argue that Bristol’s spring race was actually better than the night race because the sun would heat up the track and make the racing surface slicker.

Unfortunately, Bristol’s spring race developed a bad reputation. The quality of racing at the World’s Fastest Half-Mile always seemed to get overshadowed by cold and rainy weather, empty looking grandstands and lamentations about the track’s several reconfigurations over the last 15 years. As a result, fans came to expect the worst from Bristol’s spring race, even though the racing product was usually really good.

From that point of view, it is easy to understand why Speedway Motorsports Inc. and NASCAR wanted to try something new last year. Becoming the host for the Cup Series’ return to dirt instantly made Bristol’s spring race something fresh and unique. It also gave NASCAR a familiar venue with the required infrastructure to support a Cup Series dirt race. As a bonus, Bristol got another high-profile event that was different enough to avoid stealing the thunder of the night race. In theory, it was an all-around win.

But in practice, adding dirt has not really solved the old problems of the spring Bristol race. Last year’s event was delayed a day by rain, lowering both attendance at the track and TV ratings. NASCAR also struggled to manage track conditions during the race. Recall that the dust got so bad that NASCAR decided mid-race to switch to single file restarts to improve driver visibility. While the safety of the competitors is paramount, it was pretty ridiculous to change the restart procedure during the middle of the event. Even if last year’s race felt like something fun and unique, it revealed that NASCAR has a lot to learn about dirt racing.

One year later, racing on dirt still does not have a ringing endorsement from everyone in the NASCAR garage. Even Kyle Larson, the defending champion and an accomplished dirt racer outside of NASCAR, sounded disappointed earlier this week. Larson’s frustrations initiated from NASCAR’s decision to keep using windshields for dirt racing, but his comments that followed raised a provocative question. Can NASCAR put on a “true” dirt race using vehicles built to race on paved surfaces at a facility with a temporary dirt surface? The answer will depend on how far you can stretch the parameters of what constitutes a “true” dirt race. If all you need is cars racing on a dirt oval, you’re in luck. But Larson’s requirements, along with many others from the world of dirt racing, are going to be more stringent.

Personally, I don’t mind seeing the Cup Series race on dirt. If these really are the best stock car drivers in the world, let them compete on as many different types of tracks as possible. However, I am not convinced that Bristol is the best place for a dirt race. I would much rather see Bristol’s traditional spring race restored and the dirt race moved to another venue.

Once the novelty wears off, who is the Bristol dirt race for? The dirt racing purists who share Larson’s mindset won’t get on board unless NASCAR makes significant modifications to the Gen 7 car to produce a “true” dirt race. The more traditional stock car fans will likely grow tired of watching their favorite drivers awkwardly sliding around Bristol. NASCAR can dress up the Bristol dirt race all it wants, but the sanctioning body has not proven that dirt Bristol can produce a better racing product than concrete Bristol. If the dirt can’t deliver, the event will get crushed under the weight of its own expectations, just like the old spring race.

A better long-term solution would be upgrading a current dirt track to standards that can accommodate the Cup Series. Of course, it is always easier to spend someone else’s money, but at least that money isn’t going toward trucking tons of dirt in and out of Thunder Valley every year. Bristol can then go back to doing what it does best, showcasing a style of racing once compared to “flying fighter jets in a gymnasium.” NASCAR could even schedule the race at a different time of the year with more favorable weather.

Bristol’s second date may never have the cache of the night race, but it didn’t deserve the bad reputation it developed in the last decade. Should the race ever return, hopefully, the stigma of the past will be gone and fans can appreciate Bristol for the excellent racing it provides. Perhaps absence really does make the heart grow fonder.

I’m in favor of keeping a dirt race, but as you said, make it a real dirt race not just a novelty.

Obviously, SMI isn’t going to give up a date. But they can do like at COTA & lease tracks & bring in temporary seating. If they could seat 150K at Slinger & any number of other places they could sell out.

There are plenty of tracks in new markets that could really use the income that this would produce, just move it around.

I’d rather see this, than Auto Club as a dirt venue.

With a seasoned track, & the experience gained, the best stock car drivers in the world would soon figure it out. The racing would match the hype, & the race should be something the fans would circle on our calendars. And the drivers & owners would want on their resumes.

What do y’all think of the rumors that N. Wilksboro will become a real dirt track? It might be a win – win for all involved.

After two attempts I’d say that the Bristol dirt race is a failed experiment. I like dirt tracks, I grew up watching races at Flemington NJ, back before they paved it, but Bristol’s not a dirt track. Of course maybe it’s not Bristol, maybe the new car just doesn’t race well on short tracks, paved or dirt?

Looking at all the empty seats, adding dirt doesn’t seem to be the answer to getting people to come back for the Spring Bristol race either.

If there is going to be a dirt event on the Cup schedule then give them real dirt cars to drive. Anyone who has been to a real dirt race knows what dirt cars look like on the track and the Cup car isn’t close.

Now that Bristol is over what’s next? How about going back and race on the beach at Daytona, or maybe we can have a figure eight race? Please can we just go back to racing!

The drivers need a real race car for that and they haven’t had one for about fifteen years.