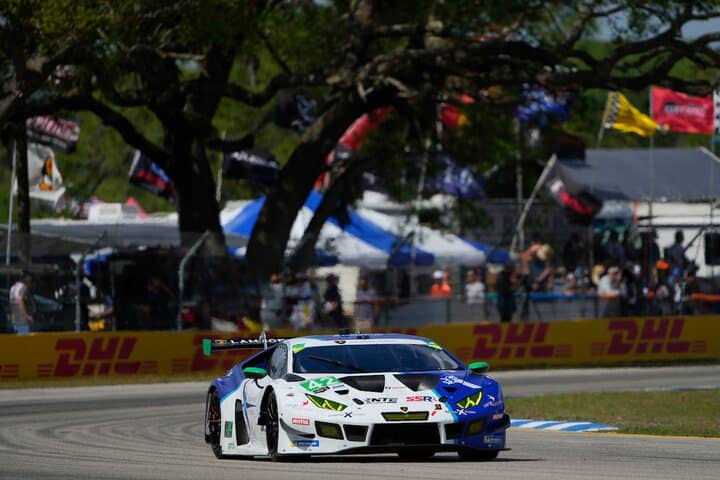 NTe Sport announced Wednesday (April 20) that they will be back on the grid after missing Long Beach earlier this month.  In addition, Marco Holzer will join Jaden Conwright in the No. 42 Lamborghini Huracan GT3 EVO in the Hyundai Monterey Sports Car Championship in place of Don Yount.

“I’m super happy to be back racing in IMSA,” Holzer said in a press release.  “It has been too long.  I have so many great races and memories of racing in the United States.  I’m looking forward to the new challenge, new team, new car, and all together at Laguna Seca.  It couldn’t be better!”

Laguna Seca will mark Holzer’s first start in the IMSA WeatherTech SportsCar Championship since the 2015 Mobil 1 12 Hours of Sebring.  He drove in that race for Flying Lizard Motorsports in an Audi R8 LMS Ultra.  He has one IMSA victory since the American Le Mans Series/Grand-Am merger.  That came with Team Falken Tire in the 2014 Petit Le Mans alongside Wolf Henzler and Bryan Sellers in a Porsche 911 RSR in the now-defunct GT Le Mans class.

Since 2015, Holzer’s career has slowed a bit.  His most recent action in North America was in 2019 when he drove a Porsche for Alegra Motorsports in Blancpain GT World Challenge America for five of the seven rounds alongside Henzler (the team entered, then withdrew from Road America).  The duo ended up ninth in points in the Pro class for the year.  By far their best weekend was VIR early in the season, when they finished second in the first race, then third in the second.

In 2020, Holzer was part of the Huber Motorsport team that won the SP9 (GT3) Pro-Am in the 24 Hours Nurburgring.  Most recently, he ran part-time last year in ADAC GT Masters for KUS Team Bernhard and Team Joos Sportwagentechnik.  In eight starts, he had a best finish of second in Race No. 2 at the Nurburgring and finished 16th in points.

What happened to keep NTe Sport from racing in Long Beach?  The team has provided more clarity on what happened.

The team suffered a serious tire blowout 280 miles into the 1500-mile haul to Long Beach.  According to the release, the team’s hauler driver “…expertly brought the transporter to a safe stop, narrowly avoiding totaling the transporter or having contact with any other cars.”  While he saved the truck and everything in it, the vehicle was not undamaged.  The truck ended up busting the radiator, damaging the suspension, components relating to Diesel Exhaust Fluid (DEF) and the wiring harness.  Naturally, that would require a lot of parts to repair.  Unfortunately, they couldn’t get them in time to be able to make the race in Long Beach.

“Missing Long Beach was really hard for us,” stated Paul Mata, NTe Sport team owner.  “That race is one of my favorites and it was a dream to have NTE/SSR compete there, and with such a strong lineup.  However, after that setback, we were able to focus on WeatherTech Raceway Laguna Seca and put together a strong lineup. I’m excited to have someone of Marco’s caliber join the team and I’m looking forward to what we hope will be a great race weekend!”