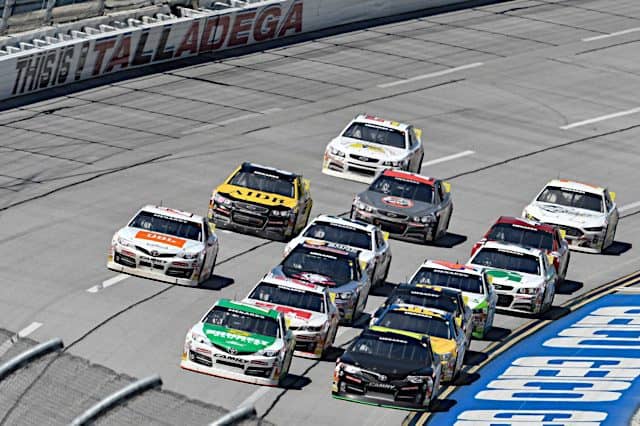 Imagine driving 76 laps around a 2.66-mile superspeedway at approximately 180 mph. That’s what the ARCA Menards Series competitors will contest at Talladega Superspeedway in the General Tire 200.

In its first three races, ARCA drivers will have raced at two superspeedways. Corey Heim dominated the season opener at Daytona International Speedway, and he looks to continue his ARCA superspeedway successes.

Heim has won the last three ARCA superspeedway races, at both Daytona and Talladega. Heim won the ARCA race at Talladega last year and he should start this race in second place as the field will be set via the 2021 owners’ points.

Not to be overlooked, Dean won the 2016 ARCA race at Talladega. Venturini has a stout lineup for the General Tire 200.

We're heading to the sweet state of Alabama tomorrow! pic.twitter.com/VBBQUAef0x

Who can best the Venturini drivers to win at Talladega?

Drew Dollar won the 2020 ARCA race at Talladega driving for Venturini, and now he drives the No. 18 Kyle Busch Motorsports Toyota.

“Things have just worked out for us at Talladega,” Dollar told Frontstretch. “The main thing is to drive the racecar to make it to the end. This year, I have a strong racecar, so I will hopefully be able to be upfront more.”

Dollar will be pulling double duty on Saturday (April 23) at Talladega. After competing in the ARCA race, he will pilot the No. 18 Joe Gibbs Racing Toyota in the NASCAR Xfinity Series race.

Dye started 14th and quietly wheeled his No. 43 GMS Racing Chevrolet to a third-place finish. Combined with his second-place finish at Phoenix Raceway and Dye leads the points heading into Talladega.

It's been over a month since the @ARCA_Racing Series has last raced, but we get to change that on Saturday!@DanielDye43 heads to @TALLADEGA for race number three on the 2022 campaign as the series' point leader!#WeAreGMS | #ARCA | #TeamChevy pic.twitter.com/EQeuDwTd3q

The last time a Chevrolet ARCA driver won at Talladega was in 2016, coincidentally by Dean. Bret Holmes and Greg Van Alst are two Chevrolet drivers to watch in the General Tire 200.

Holmes is optimistic about the race. In six ARCA starts at Talladega, he has two top fives and three top 10s with a best finish of third there in 2020. For the 2020 ARCA champion, Talladega is his home racetrack, adding a special feeling for Holmes if he indeed is victorious.

Van Alst was running well at Talladega last year until he was collected in a wreck, relegating him to a 26th-place result.

Van Alst previously told Frontstretch he views the General Tire 200 as a redemption race after he was involved in an incident at Daytona earlier this year, finishing in 22nd place.

Coupled with a 36th-place finish at Phoenix, Van Alst has endured a rough start to his first full-time campaign.

“Greg has made a pretty big commitment to come race with us and he’s had nothing but horrible luck so far this year,” ARCA Communications Manager Charlie Krall told motorsports reporter Casey Campbell. “So hopefully he gets that turned around. He was running really good here [at Talladega] last year and was in the same incident there with Ty Gibbs late in the race.”

Ford ARCA drivers have suffered a longer winless drought at Talladega as Frank Kimmel was the last driver to win there in a Ford in 2006.

Two Ford drivers who are eager to run well are Amber Balcaen and Andy Jankowiak.

Balcaen has yet to score a top-10 finish this season, but she is still ninth in points. The ARCA rookie finished 16th in her first ARCA superspeedway race at Daytona earlier this season.

“I am especially excited for Talladega because after having a race under my belt from Daytona, I now know what to expect for a superspeedway race,” Balcaen said in a team release. “I also love the fundamentals of superspeedway racing. I love the rush of going fast and being in the draft.”

“After competing at Daytona, I know what it feels like to be in the draft,” she continued. “I learned how to manage the air and speed in the cars whether I was in a small draft of cars or huge draft of cars. I’m planning to showcase and apply everything I learned at Daytona to Talladega, which makes me very optimistic for the race.”

Balcaen is confident she will wheel the No. 30 Ford to a career-best finish in the General Tire 200.

“I would like a top-10 finish at Talladega, which I think is a very manageable goal,” she said. “I want to have fun like I did in Daytona and keep progressing forward as a driver.”

Driving his own No. 73 Ford, Andy Jankowiak believes he can win.

“We’ll unload pretty quick, we demonstrated we have speed, we’re motivated as everybody, and we consider ourselves a contender,” Jankowiak told Frontstretch about his mindset for Talladega.

Jankowiak finished seventh in this race last year, and he has three top 10s in his three ARCA superspeedway races. Most recently, Jankowiak earned his career-best finish of sixth place at Daytona this season.

Jankowiak will drive the same car he used at Daytona, and he has multiple reasons for his ARCA success.

Jankowiak told Frontstretch that his self-owned ARCA team has the right people. In addition, because Jankowiak is running a part-time slate this year, his team has time to prepare for each race.

“The little stuff starts to add up and we’re making the most of what we got,” Jankowiak said about his on-track performance, in which he has five top fives in eight career ARCA starts. “It’s a total package deal yielding satisfying results.”

At Talladega, Jankowiak will have TJ Majors as his spotter. Majors is the spotter for RFK Racing driver Brad Keselowski.

“He’ll bring me good luck and guide me to the right lane,” Jankowiak said.

As a single-car team, Jankowiak has been friendly with everybody. So, who will he team up to draft with during the race?

“You never know. We’ll play it by ear,” he answered.

Jankowiak will be one of 34 participants in the General Tire 200. The race will take place on Saturday, April 23 at 1 p.m. ET with TV coverage provided by FOX Sports 1.

I am a fan of the smaller family teams but my 1st pick will be 2020 ARCA Champion and home town favorite Brett Holmes for this one. I talked to him a couple of times after the Springfield Il. dirt races and he comes across as a first class guy. Only wish he could run a few more ARCA races each year.