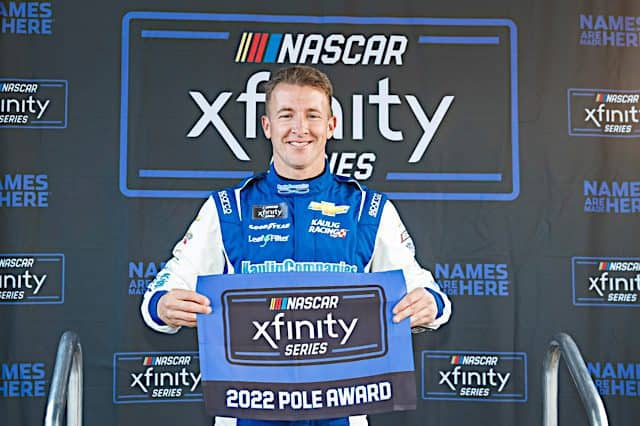 Did You Notice? … Both the NASCAR Xfinity and Camping World Truck series points are currently led by drivers happy to keep racing in their current division? AJ Allmendinger, fresh off a Championship 4 performance last year, turned down a full-time NASCAR Cup Series opportunity with Kaulig Racing to keep running Xfinity full-time.

The result has been a win-win for both sides. Allmendinger has a victory at Circuit of the Americas, top-10 finishes in all eight of his starts and leads the points by 20 over Ty Gibbs. It’s allowed him to go win-or-bust on the Cup side, getting muscled out of a second COTA win late by Ross Chastain. His veteran presence has been helpful as the company transitioned to new drivers in its other two Xfinity cars (Daniel Hemric and Landon Cassill).

Over in the Truck Series, 25-year-old reigning champion Ben Rhodes chose to stay rather than explore a promotion. Now in his seventh year running Trucks full-time for ThorSport Racing, his Bristol dirt race win this past weekend (April 16) put him back atop the standings. It’s his sixth victory in the series he’s chosen to commit to, running just 11 races in Cup and Xfinity combined (his lone Cup race came in June 2021 at Sonoma Raceway).

Rhodes isn’t the only ThorSport driver happy where he’s at. Matt Crafton has remained part of their family for over 20 years in Trucks, winning three championships while running just six races combined in Cup and Xfinity. Before scaling back to a part-time schedule in 2022, teammate Johnny Sauter had been alongside Crafton at ThorSport for most of the past decade-plus.

These lifers are important in the sport’s lower divisions, important to helping them build their brand over the long-term. It’s hard for Xfinity and Trucks to market around up-and-coming talent that’s destined to stay there just 1-3 years; those young drivers also need strong veteran competition to learn from and win championships against.

For awhile, the idea of running full-time in these lower divisions was on life support. Cup regulars would drop down and compete for victories and championships, beating up on the competition while getting additional practice time in preparation for Sunday. From 2006-10, the Xfinity Series title was won by a full-time Cup Series driver running both divisions. In 2010, over half the Truck races were won by Cup full-timers.

Their presence, over time, decimated the veterans running in Xfinity and Trucks. It was difficult-to-impossible for those teams to gain sponsorship; why would you spend your money on a full-timer running 10th when a Cup driver could get you to victory lane? It was impossible for Xfinity and Truck-only teams to gain traction and both divisions started to have up to a dozen teams start-and-parking at any given race during the 2010s.

Slowly, NASCAR realized its mistake in allowing major leaguers to come beat up the competition in AA. Recent rule changes have now limited Cup full-time drivers to five races max in both Xfinity and Trucks; they’re also banned from competing in certain races, including the all-important playoffs and Championship 4. Suddenly, both prospects and veterans in those series were thrust back into the limelight, providing more opportunity for new ownership like Kaulig to build championship programs over the long-term.

Those limitations began in 2020 and now, in 2022, we’re starting to see the fruits of that labor. Top-tier teams like Joe Gibbs Racing, with no room at the inn, are comfortable running full-time programs for drivers like Brandon Jones they don’t see as Cup material. Richard Childress Racing is also running full-time efforts for Sheldon Creed and Austin Hill, both rookies this year, with long-term plans to keep their teeth sunk into Xfinity.

Jones is joined by Allmendinger, Justin Allgaier, Ryan Sieg, Jeb Burton and others comfortable to make a home in this series full-time. It’s too early to call Josh Berry’s future, running full-time at JR Motorsports, but at age 32 a Cup opportunity may have already passed him by. They join underfunded drivers like Jeremy Clements, Brandon Brown, J.J. Yeley and others content to race on Saturdays instead of Sunday.

The result has been some of the deepest playoff fields we’ve seen in both Xfinity and the Truck Series. Twenty-four drivers have run all the races in Xfinity so far and about 18-20 have legitimate aspirations to make the 12-driver postseason field.

That translates to about a 50% chance for a full-time drivers to make the playoffs, a percentage that’s very similar to Cup, where 32 drivers are competing for 16 postseason spots.

The Truck field, one might argue, is even deeper. Twenty-four drivers have competed in all six races and 26 are postseason-eligible; in that series, only 10 drivers qualify for the playoffs. It’s an incredible mix of prospects, veterans like Crafton/Rhodes and even a guy like John Hunter Nemechek who chose a full-time Truck opportunity over running 30th every week in underfunded Cup equipment.

For years, NASCAR was criticized for the way they handled Xfinity and Trucks. But their recent decisions deserve credit. With strong ratings and separate audiences following these divisions, new ownership and talent is being groomed here that can move up the ladder in years to come.

And if a promotion never happens? They’ll make a great living where they’re at, without too much interference from the Cup stars above them.

Did You Notice? … The red flag that almost ruined the Bristol Dirt Race? As rain threatened to end the event after stage two, a variety of drivers chose not to pit, hoping Mother Nature would hand them a better finish. It’s the type of weather luck that handed Justin Haley one of the great NASCAR Cup upsets of all-time, a July 2019 rain-shortened win at Daytona International Speedway.

Except NASCAR came out and said none of those cars would be scored ahead of the others. Why? Since the race was under red flag conditions in between stages, NASCAR had not actually completed another official lap on the track. That meant every car who pitted was still scored ahead of the ones who didn’t based on the previous lap. Think of it as if someone passed another car just after the caution but winds up scored behind them because the yellow came out before they made the pass.

It’s incredibly confusing and left NASCAR in an awkward position: resume the race or have Easter Sunday shrouded in controversy (and potentially lose all momentum for the Bristol Dirt Race forever). Thankfully, the rain let up, the racing resumed and over 4 million viewers saw Kyle Busch’s surprise win, part of a season in which NASCAR viewership is up 17% over 2021.

But there needs to be a better fix for dirt racing rules going forward. You can’t just stop scoring drivers at any point during the natural run of the race because it fails the eye test; fans will always view the first car in front as the leader. Officials were ill-prepared for this type of scenario and they nearly got caught with their pants down.

I wasn’t aware Rhodes hadn’t been looking to advance into Xfinity. I would think at this point he would have people lined up to drive their car.

Would be curious to know if he had any offers, and by whom, and why he turned them down?

I am surprised it took so long for NASCAR to realize that it wasn’t a good idea to let the Cup stars hijack the lower series. The probability that I will watch a truck or X-fin race is 50% higher when there is no cup driver in the field.

I get that the red flag made things LOOK weird, but the rule itself made perfect sense. As long as everyone knows the rule there shouldn’t be a problem in the future. Hopefully there will not be another Bristol dirt race.

NASCAR really dropped the ball with the supply shortage. I am not sure what the answer is but this is not acceptable for a top tier professional sport. Maybe they should have just waited another year to introduce the new car, you know, until they were ready.

The decision to bring in the new car this year makes a LOT of cents to NA$CAR. And remember they wanted it in last year.