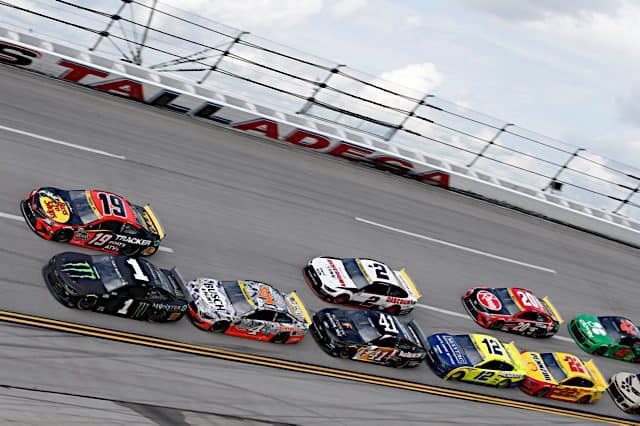 NASCAR has arrived at Talladega Superspeedway.

Burial ground rumors and Bobby Isaac hearing voices aside, Talladega is as shrouded in mystique as it is with every visit.

To borrow the tagline from the 1974 horror classic The Texas Chain Saw Massacre:

Who will survive and what will be left of them?

Often not many and not much, but sometimes things unfold in a calmer manner on the high banks of the Alabama oval. Sometimes the races are night-and-day year-to-year; 2017’s fall race was a wreckfest, with only 14 cars finishing and all but a few involved in at least one accident. Just 12 months later, only one car retired from the race due to a crash.

Crashes are a constant, but what about favorites for the win at these behemoths?

NASCAR’s “Pied Piper” announced his retirement from full-time racing after the 2017 season, opening the door for new superspeedway aces to shine, a couple of them already established. Brad Keselowski, despite changing teams in the offseason, might be the go-to, with his first career victory coming at Talladega in 2009 as Carl Edwards’ No. 99 sailed into the catch fence behind him.

Keselowski has been a constant threat at Talladega throughout the past decade, scoring six wins in all, but victory lane has featured a bit larger variety of winners. David Ragan won the 2013 Aaron’s 499 with one hell of a last-lap charge through the pack with help from Front Row Motorsports teammate David Gilliland, scoring the organization’s first victory, while Jamie McMurray scored his final points-paying Cup victory that fall.

Denny Hamlin has a couple, while Ricky Stenhouse Jr.‘s first career triumph came in the spring 2017 race, followed by a win at Daytona that summer. Aric Almirola scored his first full-length Cup win in that wildly uneventful fall 2018 running, Ryan Blaney won back-to-back photo finishes in the fall of 2019 and summer of ’20 and, most recently, Bubba Wallace became the first Black driver to win a Cup race in nearly six decades when he secured his first career victory last fall.

Let’s start out with a quintet of drivers, roughly one-eighth of the field I’ve isolated as the ones to watch come April 21. Keselowski is chief among them, winning that Talladega debut in 2009 under James Finch and scoring five more since, including last year’s running in which his Team Penske stablemate Joey Logano ended up on his roof.

Now with RFK Racing, the driver of the No. 6 started the year off with a team sweep of the Bluegreen Vacations Duels at Daytona: Keselowski took the first, his teammate Chris Buescher the second. If anyone’s definitively inherited the Pied Piper moniker, it’s probably Keselowski. Historically, his six wins at Talladega are just part of a 26-race resume that includes 13 (half!) top-10 finishes, just three retirements due to crashes, 313 laps led and starting positions rarely outside of the top 20. His average finish is 15.1.

Former teammate Logano has three victories at the track and 11 top 10s in the same amount of starts, 416 circuits in front of the field and a most recent finish of third in last year’s fall race, though prior to that the driver of the No. 22 had been on a skid of four straight starts without a top 10. Logano’s current Team Penske partner in Blaney has a pair of wins and five top 10s, though his superspeedway excellence came more at the Ford stable than with Wood Brothers Racing.

See also
Only Yesterday: How the Talladega Game Was Changed

Meanwhile, Hamlin has 32 visits to the track under his belt and came home with top-10 finishes in 14 of them. That includes two wins and nine top-five efforts, with just five total retirements for the longtime driver of the No. 11. Almirola, meanwhile, has nine top 10s spread across every result but second and sixth, including his win in the fall of 2018. Recently, he’s failed to finish better than 15th in three straight races, though he racked up eight straight top-10 finishes between the fall 2016 and summer 2020 races.

Outside of those five, there’s a few additional contenders that come to mind. Justin Haley became the Pied Piper of the Xfinity Series, claiming two wins at Talladega for Kaulig Racing and never finishing worse than eighth at the track in Xfinity competition. He’s full time in Cup in 2022 and has the Kaulig machinery under him; he’ll have his No. 11 NXS replacement in Daniel Hemric driving the team’s Cup No. 16 on Sunday.

Wallace is consistently up front during superspeedway races and has run into bad luck several times the past couple years. Logano’s flipping No. 22 clipped the No. 23 last spring, damaging the chassis, while wall scrapes while with Richard Petty Motorsports ruined solid runs in 2020.

The 2021 Talladega winner has led 31 laps across the last three races in his home state, while his 23XI Racing teammate in Kurt Busch has competed in a whopping 42 races at the track. Busch has racked up 22 top 10s but has yet to win at Talladega; his recent results include a fourth last fall and a dismal 32nd the fall before that, a race that featured his No. 1 going airborne across the start-finish line amid a massive crash.

Subpar performances come from some relatively surprising drivers like reigning champion Kyle Larson, who has just two top 10s at Talladega in 14 starts, and his Hendrick Motorsports teammate Alex Bowman, who finished 38th in both races there last year. Even Michael McDowell, a seemingly perennial contender at superspeedways, has just three top-15 finishes in 22 starts in Alabama.

Talladega also hasn’t been kind to Martin Truex Jr., who didn’t finish better than 20th in 10 straight races from Oct. 2016 to April 2021, and most of the Joe Gibbs Racing stable.

But don’t count out drivers like Stenhouse, Ragan, Kevin Harvick or Tyler Reddick, all of whom could come into play on Sunday, and even Austin Cindric, who won the most recent race at the track type and seems to be bouncing well off the superspeedway success of teammates Logano and Blaney.

But who are we kidding? It’s Talladega. Anyone is a contender at any given moment. Predictions are futile.

This may be one of Kesowski’s final realistic chances to make the “playoffs“ this season.

Blaney, Logano, Hamlin, and Bubba. All good SS drivers. Keselowski is too but with his luck he’ll somehow end up 35th on Sunday. All HMS drivers except Larson are good superspeedways except Larson, who’s not really that bad but just has terrible SS luck.