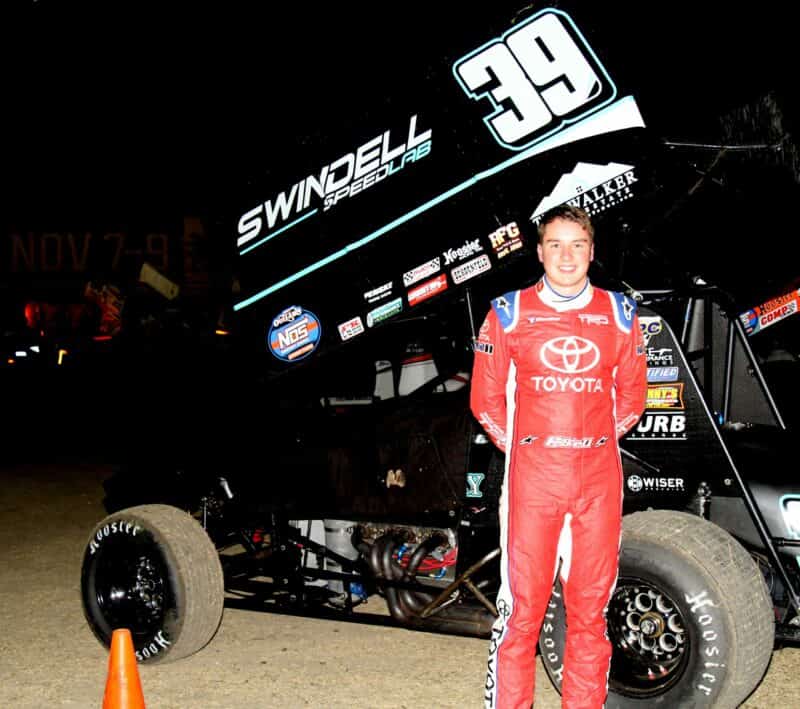 Anthony Macri’s red-hot month of April continued Thursday night, with the Dillsburg, Pa. native scoring his fourth consecutive win in a 410 sprint car in the All-Star Circuit of Champions feature at the Bloomsburg Fair Raceway. Macri was originally slated to start on the pole, but had to rebound from third after being penalized for jumping the initial start.

Macri’s win was his second in as many nights after he won the “Invasion of the Posse” race at Bridgeport Motorsports Park on Wednesday. The triumph made Macri the first 410 sprint car winner at the new Bloomsburg Fair Raceway, a 0.375-mile oval built over the original fairgrounds track last year in an effort to return racing to Bloomsburg after a 30-plus year hiatus.

Among the ASCoC regulars, Bill Balog was the top finisher in second, though little will change in the points race after leader and defending champion Tyler Courtney finished fourth. It was a night of opposites for the NASCAR regulars in the field, with Bell parking his machine early with brake issues while Alex Bowman scored a top-10 finish.

Giovanni Scelzi led a California charge to the front of the World of Outlaws residency out west last month. Now, Macri draws blood for the Pennsylvania Posse as the first touring series race hits the Keystone state. Couple that with Posse driver Brent Marks also scoring an Outlaws win at Devil’s Bowl, and the regional powers of sprint car racing are positioning themselves for a banner 2022. Expect Posse fans to be out in force at Williams Grove and Port Royal.

Parker Price-Miller had a solid night as he continues to balance cancer treatment with his racing career, taking the first quick time award for the winged sprint cars at Bloomsburg and finishing sixth in the feature.

13.250! @parker_pm9 goes fastest in Time Trials for the @tezos @ASCoC at @BloomFairRacewy!

Justin Peck rounded out the podium with Macri and Balog, a strong rebound for his team after they got caught up in an accident at Bridgeport on Wednesday night. The momentum couldn’t have come at a better time as the ASCoC heads to Williams Grove on Friday; Peck won the season opener at the track last month.

Dominic Scelzi was the hard charger of Thursday’s feature at Bloomsburg, moving up eight positions over the course of 30 laps.

Scott Bogucki’s first time leading laps in an ASCoC feature is not likely a memory he’s going to want to keep. After leading the opening nine laps of the race, Bogucki got out of shape in turn 1 shortly after losing the lead, tail-swiping the wall and flipping his car over.

Accomplished wingless racers Chris Windom and Kevin Thomas Jr. both finished outside the top 15 as they continue to make their transition to winged sprint car racing.

In the supporting SpeedSTR class, Oley, Pa.’s Louden Reimert spun out while leading the second heat race and was unable to start the feature event.

Shoulda been a win @BloomFairRacewy, but can't win em all… Was charging for the lead after starting 6th and lost oil pressure. Didn't hurt the motor, but had to pull it off. We were fast 🤷🏽‍♂️ pic.twitter.com/6njJa8thit

Cup Series regular Christopher Bell visibly struggled with the handling of his car in the third heat, nearly spinning out unassisted and falling from a transfer spot. Though he rebounded to win the B-main, Bell eventually retired short of the finish with brake issues.

🏁 for @CBellRacing as he picks up the B-main win.

Cup Series regular Alex Bowman finished last in the dash race after making it in based on his qualifying time, but ran a consistent feature to score a seventh-place finish, his career best in ASCoC competition. Bowman has shown marked improvement in his new sprint car efforts.

The folks at Bloomsburg had to be breathing a sigh of relief to see healthy car counts for both classes that ran Thursday night; the track’s season opener totaled only 27 cars across the two classes, with the USAC East Coast Sprints drawing only 10 entries. Given how many times the East Coast cars are scheduled to run at Bloomsburg, sign-in may be stressful this summer.

I’m not going to try to take sides in what has become a publicized feud between some town residents and the promoters that brought racing back to the Bloomsburg Fairgrounds. But, seeing as this was the first race that I’ve watched at the track I do have to say damn, there are a LOT of houses literally in the track’s backyard.

Ya gotta love Pennsylvania racetracks with houses almost right ON the racetrack!😊👍🏼
The @ASCoC is at @BloomFairRacewy on @FloRacing ! pic.twitter.com/NC19H2ZWf4

I think there’s some valid concern about this track running so many midweek shows. I love being able to hear my home track on the weekends, but on a weeknight when I have to work the next morning? Yes, I know that the situation at Port Royal, Knoxville, etc. is similar. But those tracks didn’t go three decades in between hosting races.

In case any of our readers were wondering why this feature ran in lieu of Not Quite NASCAR, it’s simple. Anyone near Talladega looking for a dirt race fix needs go no further than across the street to the Talladega Dirt Track Friday and Saturday night. The racing there is nothing remarkable and the facility very rough around the edges, but the people watching is second-to-none. Plus, any size cooler, any size chair, it’s all fair game in the short track grandstands. Pro tip though, check on your car from time to time. The threat of being parked-in is VERY real.

28 – 410 sprint cars entered for the ASCoC program Thursday at Bloomsburg.

Where it Rated (on a scale of one to six cans with one a stinker and a six-pack an instant classic): We’ll give this midweek show three-and-a-half cold Yuenglings. The show was competent, if not a little uneventful, especially in the top 10.

Up Next: The Florida Dirt Nationals kick off Friday night at All-Tech Raceway for $25,000-to-win for the super late models. Coverage can be found on RaceXR.