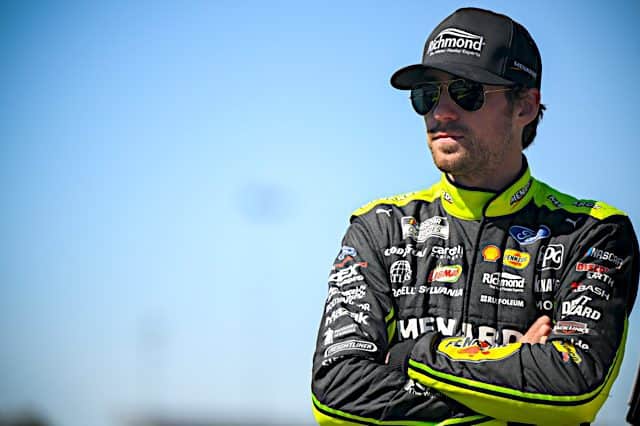 NASCAR Cup Series drivers are ready to shake and bake this weekend as they take on Talladega Superspeedway. Let’s get your daily fantasy NASCAR DraftKings lineups ready for the GEICO 500, airing Sunday, April 24 at 3 p.m. ET on FOX.

This race marks the Next Gen cars’ first visit to the 2.66-mile racetrack, so it will be interesting to see how they run, especially since there’s no practice. There is qualifying, however, on Saturday (11 a.m. ET, FOX Sports 1), so be sure to check out where each driver starts.

You can also study previous races at Talladega, as well as Daytona International Speedway, to help you determine which strategy might be best in daily fantasy. Sometimes, a stars-and-scrubs approach is what wins (higher-priced drivers paired with those in the lowest tier). While Talladega has a history of upsets, five of the last six races here have been won by top-flight programs like Hendrick Motorsports, Team Penske or Joe Gibbs Racing.

See also
NASCAR 101: Who Are the New Pied Pipers of Talladega?

But if a big wreck takes out a lot of contenders, as is often the case at these superspeedways, then a star-studded lineup could suffer. That’s why many DFS users will leave quite a bit of salary on the table, as some of the late-race contenders who make it through are typically underdogs who run further back in the pack.

Before I share my picks for Talladega, here’s a look back at the Bristol Motor Speedway dirt race.

Kyle Busch lucked his way into the win after Chase Briscoe sent it into Tyler Reddick on the final turn. Thanks to their spins, Joey Logano came in second ahead of Reddick, earning extra points. Plus, Michael McDowell earned a ninth-place finish, producing a good value on DraftKings.

This lineup won $0.50 in the Quarter Jukebox tournament. The top score in that contest was 328.3 and had Ryan Blaney, Reddick, Kyle Busch, Daniel Suarez, Brad Keselowski and Harrison Burton.

DraftKings Picks for 2022 GEICO 500 at Talladega

Blaney feels a bit too expensive for this slate, but if he leads laps, posts some fastest laps and gets at least a top five, it could be worth it. He won back-to-back races in fall 2019 and June 2020 at ‘Dega, leading 63 laps in the latter event. He also was ninth in the spring 2016 race.

The No. 12 Team Penske driver has also performed well at Daytona several times. He earned a fourth place in this year’s Daytona 500 after taking the helm for 36 laps. Blaney won last August at the 2.5-mile superspeedway and was second and sixth in the spring and August 2020 events, respectively. Plus, he was in the running for another top 10 at Atlanta Motor Speedway’s pack race last month before crashing on the final lap, winding up 17th.

If he and his Penske teammates find their way to the front by the end of the race, Blaney could win and produce a good score on DraftKings.

Denny Hamlin has started the last three Talladega events from the pole position and brought home the win in fall 2020. He also was seventh in the rain-shortened playoff race in 2021. Hamlin is one of the strongest active superspeedway racers, proving it with five top fives and seven top-10 finishes in the past 12 events at Talladega.

At Talladega’s sister track, the No. 11 Joe Gibbs Racing Toyota driver has collected three Daytona 500 victories: 2016, 2019 and 2020. Hamlin placed fifth in last year’s season opener and was third in the summer race in 2020.

While Hamlin hasn’t run as well at pack races this year, crashing out early at both Daytona and Atlanta, he should break out of his slump and post a strong finish on Sunday.

Keselowski is the defending race winner at the 2.66-mile course and also was victorious in the fall 2017 and spring 2016 races. In fact, he’s the only active driver with six trophies at this facility. Last fall, he pushed Bubba Wallace to the win in the 117-lap race that was cut short due to rain.

But that was all with Penske; what about this year with Roush Fenway Keselowski Racing? Well, in this year’s Daytona 500, he led a race-high 67 circuits before ultimately crossing the line in ninth place. Then, at Atlanta, Keselowski gained 12 positions to finish 12th. Quietly, the No. 6 team hasn’t finished worse than 17th since Phoenix Raceway, consistency overshadowed by a 100-point penalty for a parts modification.

See also
Did You Notice?: NASCAR's All Business With RFK Racing; Where Does Brad Keselowski Go From Here?

If the No. 6 can push well this week and not incur damage, Keselowski should once again finish near the front. But if he qualifies in the top 10, position differential bonus points will be limited and you might need to pivot elsewhere. Plan accordingly.

Wallace’s lone top five at Talladega was his victory last year. However, the 23XI Racing driver has improved in pack racing as he’s gained more Cup experience. Last spring, he led 16 laps en route to 19th place; in June 2020, he gained 10 spots and wound up 14th.

Wallace has had much better results at Daytona, though, as he has four top-five finishes there. The No. 23 pilot was runner up in the past two races at the Florida track. Plus, he earned a fifth place in the summer 2020 race.

His salary is a bit high, too, but as long as he earns a good result, he should post a good fantasy score on DraftKings.

I think this weekend is one of the first times this year where I’m considering both RFK Racing drivers in the same lineup. Chris Buescher is here mainly for his salary, but he does have some good results on superspeedways, running sixth last fall and in June 2020. Also, he drove from 25th to 11th in the spring 2018 race.

At Daytona, the No. 17 car was 16th in this season’s Daytona 500, but didn’t score well on DraftKings since he started fourth. However, in 2020, Buescher finished both events in third and ninth, and was fifth in both races in 2018. This year, he scored a seventh place while wrecking across the finish line at Atlanta. That’s a solid slate of pack racing consistency he can build on with new teammate Keselowski.

Even if Buescher has another top-five qualifying run, he might be worth it and is expected to run up front.

Ty Dillon is very inexpensive for someone who hasn’t finished worse than 17th at Talladega in eight career Cup starts. Of course, the chassis is different this year than it’s ever been. But still, it’s pretty good value for a guy who typically qualifies in the 20s, then moves up like clockwork in the pack. In fall 2019, Dillon was 10th at this track, and the following year, he ended up third.

In addition, the No. 42 Petty GMS Motorsports driver has some good results at Daytona, earning an 11th in this year’s season opener after qualifying 26th. In 2019, Dillon placed sixth in the spring and fourth in the summer race. He had another sixth in the July 2018 event.

This underdog would be a good value play for your DraftKings rosters. Don’t hesitate to use him.