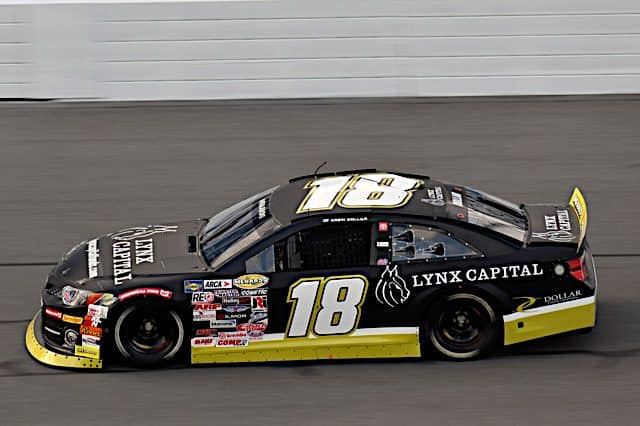 Drew Dollar will lead the ARCA Menards Series field to green in the 2022 General Tire 200 at Talladega Superspeedway Saturday (April 23). The 33-car field was set via the 2021 owners’ point standings and all who entered made the race.

In the lone ARCA practice session, Dollar was third-fastest on speed. The 2020 Talladega ARCA race winner will make his second start this year driving the No. 18 Kyle Busch Motorsports Toyota. Dollar contended in the 2022 season opener but finished 19th at Daytona International Speedway due to a last-lap crash.

Venturini Motorsports teammates Corey Heim and Parker Chase will start second and third, respectively. Heim has won the last three ARCA superspeedway races, including the Talladega race last year. Chase is currently third in the point standings, though he is competing for Venturini part-time this year.

Nick Sanchez and Toni Breidinger round out the top-five starters. Breidinger, however, will drop to the tail end of the field before the green flag flies after she wrecked her No. 25 Toyota during practice.

Crash in @ARCA_Racing practice. Venturini Motorsports running together and #25 @ToniBreidinger goes for a ride. @NASCARONFOX pic.twitter.com/KQDw09tm6W

Breidinger was successfully released from the infield care center and she’ll use a backup car for the race.

Points leader Daniel Dye will start 12th in this race. After placing fourth on the leaderboard in practice, Dye is competing at Talladega for the first time in his ARCA career.

In the lone practice session, Willie Mullins completed the fastest lap. He’ll have to come from the back half of the field, though as he’s starting in 28th place.

The General Tire 200 will take place on Saturday, April 23 at 1 p.m. ET with TV coverage provided by FOX Sports 1.