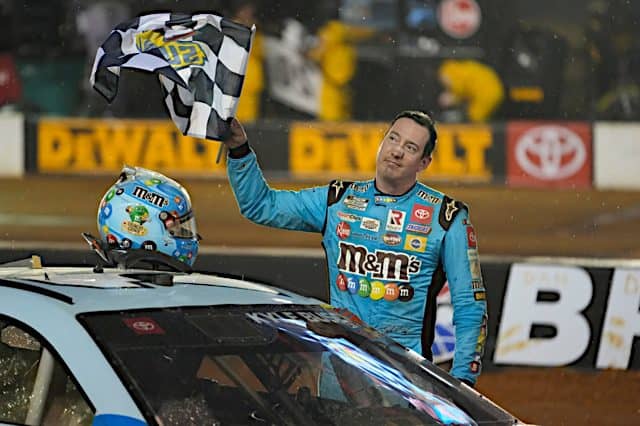 Kyle Busch became the ninth driver to achieve 60 NASCAR Cup Series wins. How does he stack up to the other eight, and how far does he go?

Anthony Damcott: Sometimes when I think of Kyle Busch, I think of Darrell Waltrip, both in terms of their personas and their stats. The two are very successful Cup drivers who aren’t the biggest fan favorites on track, to say the least. They also have collected a majority of their wins with one team and just a handful with another. Of the drivers with 60-plus wins, I see Busch stacking up with Waltrip the most when it comes to stats, too. Busch can reach at least 80 wins like Waltrip and maybe grab that third championship like Waltrip as well. He isn’t a Richard Petty or Dale Earnhardt, but we’ll definitely see Busch work his way even further up the all-time wins list.

Luken Glover: Busch is in superior company with his 60th win. The others include Petty, David Pearson, Jeff Gordon, Bobby Allison, Waltrip, Jimmie Johnson, Cale Yarborough and Earnhardt. Talk about legendary predecessors. Allison is the only one of those three who didn’t score three titles, but he did win three Daytona 500s. Busch is 16 wins off of the next highest competitor, and he has a solid amount of time to do it. Busch will get to 70 wins, and he may have one more title run in him, if not more.

Mike Neff: Busch will score one or two more championships in his career. He will land 30-40 more wins, which will put him third or fourth on the list. It seems like a reachable goal for him to score 100 wins in all three national series.

Joy Tomlinson: Busch’s Cup career is impressive by today’s standards. Most of the other eight drivers ran several years (or decades) ago, so the comparison is a bit flawed. However, Johnson was active two years ago and last won in 2017. Johnson is one of three with seven championships. It’s much more difficult to achieve that with the current playoff system, so I don’t think Busch can reach that. He’ll still win more races, though. After all, he’s won at least one every year since 2005.

Neff: If the racing gods are just, Tyler Reddick will score a win this weekend. But in reality, it will more likely be Denny Hamlin celebrating in victory lane.

Glover: At Talladega, anything can happen. There is a very good chance we get a first-time winner. Daniel Suarez and Reddick are both on the verge of their first win. Harrison Burton showed a lot of speed at the Daytona 500. Daniel Hemric and Noah Gragson were both contenders in the Daytona 500. However, the streak will come to an end. Ryan Blaney, Brad Keselowski, Hamlin and many others will leave their mark before the race is over.

Damcott: The Next Gen car has kind of served as an equalizer this season (based on the diversity of winners we’ve already had), so if you combine that with a superspeedway, another equalizer, anything can happen. It’s going to be all about being in the right place at the right time and staying out of trouble with the new car to stay in it. It’s always nice to see an underdog take the shock win, but I wouldn’t place any large bets on it. The trend will continue and we’ll get another first-time winner; drivers like Reddick and Suarez have shown speed all season. However, it’s going to be tough with the ever-changing momentum throughout the race.

Tomlinson: Maybe? I mean, Reddick almost got his first victory at the Bristol Motor Speedway dirt track last week. But the number of drivers yet to win a Cup race is dwindling, at least ones with strong cars. Suarez, Reddick, Hemric, Burton, Gragson, Ty Dillon and Todd Gilliland are all capable of winning, especially at a track like Talladega. Justin Haley won at Daytona International Speedway after rain and lightning halted the event. Michael McDowell was in the right place at the right time when the caution came out on the last lap. My choice for this weekend is Reddick, as he has two top 10s at Talladega.

Who else would you like to see be a guest broadcaster for FOX this year?

Tomlinson: If he wasn’t running in the Honda Indy Grand Prix at Alabama at Barber Motorsports Park that day, I would say Johnson at Dover Motor Speedway. But he is (as of this moment), so I will say Mark Martin at Darlington Raceway. I thought he did all right when he joined the booth at Auto Club Speedway. It’s a classic race and would be nice for the two-time Darlington winner to be an analyst for the Cup event.

Damcott: The thought of Ryan Newman being in the booth is awesome, because his background in engineering and knowledge of a racecar could lend some incredibly helpful insight to viewers at home about the Next Gen car. Also, his humor and dynamic with Clint Bowyer could also give some entertainment to the booth, like Tony Stewart has been able to do.

Neff: Carl Edwards would be fun to see. Would be nice to hear Allen Bestwick again, too.

Glover: I’ve really enjoyed drivers who enjoyed some of their best seasons in the 2000s. Stewart and Matt Kenseth did a great job, and while he was nearing the end of his career during that era, I enjoyed Martin’s cameo at Auto Club too. Maybe Martin could make an appearance at some point. Another one would be Edwards, who is articulate and brings great perspective any time we can hear from him. After his mysterious retirement and absence from the NASCAR scene, a return to the booth would be popular. While they may not offer the best insight into the Next Gen car, I would also like to see a driver from the 20th century make an appearance like Waltrip did at Bristol dirt. Somebody like Terry Labonte or Ken Schrader would be intriguing to bring in, though it is outside the box.

How will Jeffrey Earnhardt fare driving for Richard Childress Racing at Talladega in the NASCAR Xfinity Series? And how much of a difference will Larry McReynolds make as his crew chief?

Glover: If there is an opportunity for this to work, Talladega is the right place to do it. Jeffrey Earnhardt will have help from his RCR teammates and Kaulig Racing, which has an alliance with RCR. Talladega is a 50/50 track, so if he’s got a fast car and can make it to the end of the race, he will have a decent shot. McReynolds has not been on the box in 20 years but is still as sharp as he was then in many ways. It’s a great opportunity to attract fans to the race, and it may just work out to where they earn a solid finish, if not a win.

Damcott: The publicity surrounding it is absolutely amazing, and if Earnhardt wins, it could be the story of the year. However, McReynolds hasn’t called shots in 20-plus years, and while he has a very good working knowledge of the rules and the cars from his time as an analyst, I don’t know how well that will translate to being in the moment as a crew chief. I’m cautiously optimistic about the opportunity for Earnhardt, as a good run could land him more opportunities, whether it’s with RCR in the No. 3 or a good ride somewhere else. That being said, he had a chance in a Joe Gibbs Racing car and didn’t win, so a poor run might ruin his shot at getting another decent ride.

Tomlinson: He’ll likely run well through much of the race but might not finish as well. Earnhardt will have some teammates to work with and might could collaborate with Kaulig as well. Kaulig is definitely known for its superspeedway skills, so if Earnhardt avoids wrecks and sticks with these teams, he could earn his first top 10 at Talladega. As far as McReynolds, I’m not quite sure. He hasn’t served as a crew chief since 2000 for Mike Skinner in Cup, over 20 years ago. Cars have changed a bit since then. However, he did lead Dale Earnhardt to the victory at Daytona in 1998 and Davey Allison to a win at Daytona and Talladega.

Neff: Earnhardt will probably get taken out in a wreck. McReynolds is a fun publicity stunt, but he won’t make a significant impact.

Here’s what I see the future hold for Kyle. Losing his long time sponsor, puts a big question mark behind his name. That plus the facts that Gibbs isn’t reluctant to cut loose proven winners, think Matt Kensith, & with Ty Gibbs waiting (impatiently) in the wings. I think he’s got maybe, one more year at most with Gibbs.

When he’s available Kurt retires, & he finishes his career at 23XI.

Kyle has lost so many races because of himself and his team. He could be at 80 already and have multiple championships if it wasn’t for this constant problem.

DW said it right, Talledega and Daytona aren’t racing, they are horsepower, speed, handling, and luck. Racing is getting back to the regular tracks where you are actually in control of things.

Jeffery Earnhardt has been around for years. He’s never been in a good car before so I thought he might have a little success (Top 20). McReynolds come on board after so many years and with new car, I don’t think he’s going to add anything to the mix.