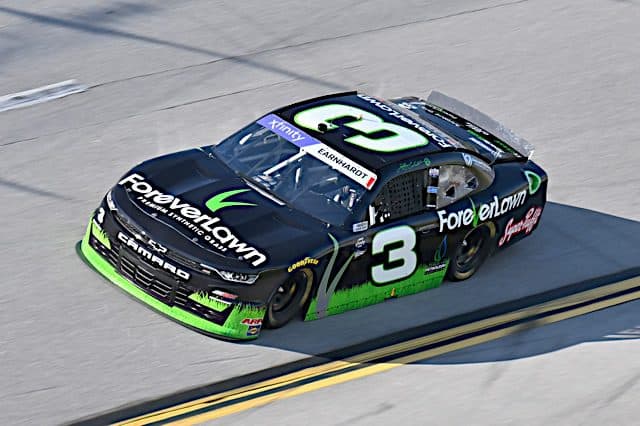 An Earnhardt. A No. 3 car. A superspeedway. Larry Mac. Sound familiar?

Jeffrey Earnhardt scored his first career NASCAR Xfinity Series pole in his 136th start at Talladega Superspeedway for Saturday’s (April 23) Ag-Pro 300 with a speed of 182.56 mph in the final round of qualifying.

With a best finish of third at Charlotte Motor Speedway in 2019, Earnhardt is still looking for his first career Xfinity Series win. He’ll have Larry McReynolds on top of the pit box, who’s back as a crew chief for the first time since 2000.

Earnhardt will be joined on the front row by RCR teammate Austin Hill. Hill has thrived at the superspeedways this season, winning the Xfinity season opener at Daytona International Speedway in February as a rookie.

Ty Gibbs will start third, missing out on his fourth consecutive pole in the Xfinity Series (that would’ve tied Austin Dillon’s 2013 record for the most consecutive poles). Gibbs was fastest in the first round of qualifying, but he had to settle for third in the final round.

With 38 starting spots and 41 entries, three drivers failed to qualify for Saturday’s race. Those three were Natalie Decker, CJ McLaughlin, and Jesse Iwuji.

The Ag-Pro 300 will take place at Talladega Superspeedway on Saturday, April 23 at 4:00 p.m. ET with TV coverage provided by FOX.

That’s amazing, Earnhardt and Larry Mac together in the #3 for the first time and to Nascars delight they win the pole. And Jeffreys RCR teammate Austin Hill is starting 2nd. What were the odds of this happening, amazing.

I’m not so sure I’m buying this? This kind of reminds me of when Danica won the pole for the Daytona 500.

After watching the finish I’m thinking Earnhardt on the pole was legit. The guy has just driven a bunch of marginal cars recently.