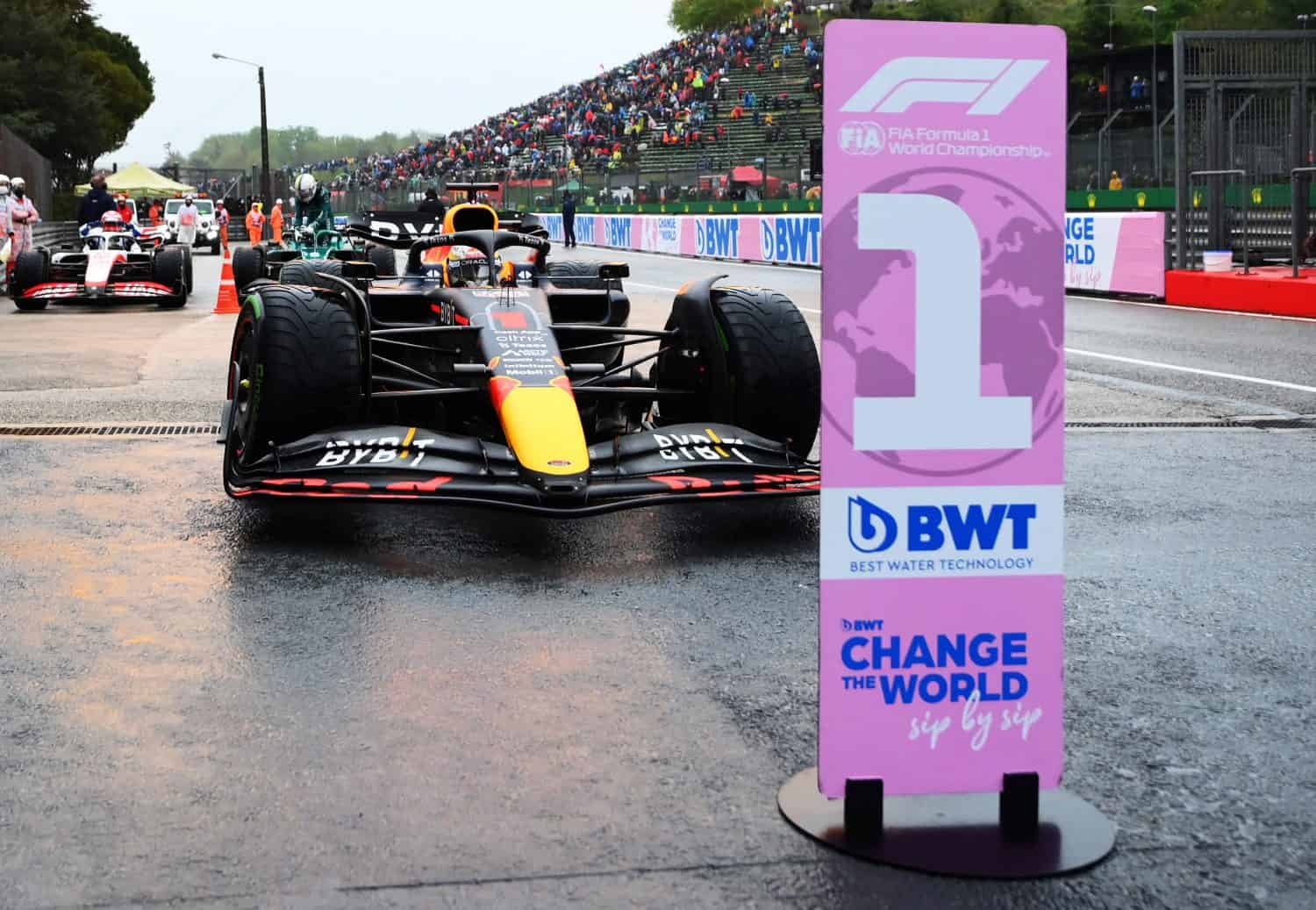 It is an official pole; the revised sprint procedures for 2022 credit the fastest driver in qualifying with the pole position.

“Very pleased with pole position, tomorrow and Sunday will be very different when it comes to weather conditions,” Verstappen said post-qualifying on the Sky TV broadcast. “Our first three races didn’t go to plan, but we’ll try and have a good race here.”

Charles Leclerc claimed the second-fastest time. “When it counts, in Q3, I made the wrong choice,” Leclerc said post-qualifying. “But P2 is not a disaster”

Lando Norris, Kevin Magnussen and Fernando Alonso rounded out the top five. Norris and Magnussen had their best qualifying result of the season so far, and Magnussen’s fourth place the best result in the history of the Haas team.

But it was Lewis Hamilton, on intermediates, first on the track in Q1, but he radioed his crew immediately that a dry line had formed. Drivers on slicks were certainly faster; Lance Stroll set the pace on softs before a red flag for Alexander Albon’s explosive brake failure in the Variante Alta stopped the action with just over 12 minutes remaining.

The track got faster and faster as it dried.  A yellow flag for Nicolas Latifi’s spin at the Villeneuve chicane barely interrupted proceedings, but a slow lap from Hamilton with rivals behind still on flyers forced the seven-time champion to keep pushing. His second flying lap was good enough to narrowly avoid elimination, dooming Yuki Tsunoda, Pierre Gasly, Latifi, Esteban Ocon and Albon to start Saturday’s sprint from the final five positions.

Sainz was the first out in Q2, banking a lap in the high 1:18s that was immediately bettered by both Verstappen and Leclerc. On his second lap Sainz lost the rear in Rivazza 2, nosing into the barriers and eliminating the Spaniard from the session.

The rain started to fall under the red, leaving George Russell, Schumacher, Hamilton, Zhou Guanyu and Stroll stranded at the bottom of the grid. It is the first time since the Japanese Grand Prix in 2012 that both Mercedes cars have missed Q3.

On a circuit drying once again, intermediates were the tires of choice to start Q3. Verstappen went fastest before another red flag, this one for Magnussen nosing into the gravel trap at Acque Minerale. The Dane kept the Haas rolling and was able to return to the session.

Perez and Alonso had lap times deleted for track limits in the tricky conditions as Leclerc and Verstappen traded fastest times, until yet another red flag, this for Valtteri Bottas’ stationary Alfa Romeo, brought action to a standstill for the third time. Even with what the Dutchman described as a “massive lift” as he passed the stricken Alfa, Verstappen’s last lap before the red flag was still eight tenths clear of Leclerc’s best.

Under the red, it started to rain again. All drivers lined up behind Verstappen at pit exit, hoping to fit in one or two more hot laps on inters with three minutes remaining.  It wouldn’t come to pass. After Norris nosed his McLaren into the same wall Magnussen had hit earlier, the red flag came out for the fourth and final time and the session was not restarted.

On the subject of Mercedes’ porpoising and tire warming issues, Russell said, “If there is a weekend to not be where we want to be, sprint weekend is the one to do it in.”