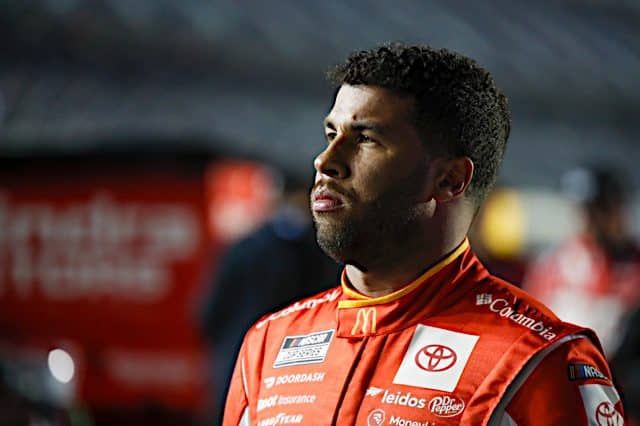 TALLADEGA, Ala. – Bubba Wallace is trying to “keep it low key, under the radar.”

That’s how Wallace attempts to approach to life and his return to Talladega Superspeedway, the site of his historic NASCAR Cup Series win six months ago.

He also swears he’s not superstitious.

You can’t miss the mustache.

The 23XI Racing driver strolled into the Talladega Superspeedway media center sporting aviators and a mustache he’s spent the last month growing. The ‘stache last graced his upper lip at Talladega in October 2021.

Wallace will take all the good vibes he can get.

He enters Sunday’s race (April 24) 22nd in points and hasn’t placed in the top 10 since he narrowly lost to Austin Cindric in the season-opening Daytona 500.

Seeking his second Cup win at a track that’s come to define him so far, from his win last fall to the controversial and often misunderstood events there in 2020, Wallace said he didn’t experience any out-of-the-ordinary emotions when he arrived at the Alabama track this weekend.

Wallace has plenty of reason to be optimistic about Sunday.

He enters the GEICO 500 having finished inside the top two in the last three races at Talladega and Daytona. Should he do that again, he’d become the fifth driver to earn four consecutive top-two finishes at Daytona and Talladega.

That comes on top of Wallace running in the top three at the white flag at Atlanta Motor Speedway in March before he was involved in a crash coming to the checkered flag.

Five years into his full-time NASCAR Cup career, when did the art of superspeedway racing click for Wallace?

He’s not entirely sure.

However, there is one race he “continue(s) to relive in my head.”

It’s the regular-season finale at Daytona in 2020.

“It was (William Bryon‘s) first win,” Wallace recounted. “We took the lead for a split second and then (Joey) Logano got wrecked from behind and kind of got shoved in my door and we cut a tire and that was with a few to go. … That was the one where I was like ‘oh, shit, we’re going to win. It’s going to be awesome.’ I feel like we’ve always had speed in the Cup cars. We finished 15th in my first Cup (superspeedway) race in 2017… for me, it’s been about surviving and understanding the game. We always had speed (at Richard Petty Motorsports).”

Wallace then referenced a video Fox Sports’ Bob Pockrass shared on Twitter from an interview with Logano, who shared his view of how Wallace has developed into a threat on superspeedways.

Joey Logano has seen Bubba Wallace improve how he races at Daytona and Talladega. Logano said that Wallace used to be fairly easy to beat. He explains: pic.twitter.com/eqTIFQlCnz

“Listening to what Logano said that I was more patient and let the races come to me, you ask me on the spot on what changed, I don’t freaking know,” Wallace said.  “It doesn’t feel like anything has changed, just the finishes have gotten better, but then you go back and hear those comments and you think yes, I guess they are right. It’s nice to hear somebody else’s perspective on what has changed. I guess just being more relaxed. …

“I might make an impatient move and get shoved out of line and go to the back and ride, because that is where you see the lay of the land and where we are at. I can’t give you a clear answer on what has clicked, just the finishes have been coming.”

Wallace, who will start ninth, said it’s “hard for me to predict” how aggressive he’ll be Sunday.

“Honestly, I think everybody’s going to be aggressive at the start and it’s going to be sketchy at times,” Wallace said. “This track allows it to be easier. At the same time, we are Cup drivers, we’re going to get this top riding just to survive to the end of stages. I hope that doesn’t happen. I like when it’s double-file and we’re racing, but at the same time, if someone steps over the line, that’s when the crashes happen. We are in the Cup Series. We all know how hard it is to win, so you have to be aggressive.”

The difficulty of winning came up again at the end of Wallace’s press conference.

His lone victory, which came when the race was called for rain, generated criticism among those who want to diminish Wallace’s accomplishments at every turn, forever moving the goalposts.

It was rain-shortened so it isn’t a real win, or a “Mickey Mouse” win, as Wallace mentioned last weekend at Bristol Motor Speedway.

Earlier this week, Wallace’s narrative crossed streams with another story that arose out of another shortened race at Talladega last fall.

The day before Wallace’s achievement, Brandon Brown won the first NASCAR Xfinity Series race of his career. It occurred when he was narrowly scored as the leader once the race was called due to darkness.

However, in the six months since, the victory has come to be defined by what happened after the race. A vulgar political chant overheard in the frontstretch grandstands by the TV broadcast quickly turned into the euphemistic “Let’s Go Brandon” meme. It was a meme Brown initially tried to distance himself before ultimately embracing it in a failed sponsorship deal with a cryptocurrency.

On Thursday (April 21), Brown came to Wallace’s defense on Twitter after a user on the site criticized Wallace for winning a rain-shortened race.

I will@StrokerAce90 a win is a win, no matter if it’s rain, darkness (like mine) or any other safety hazard that calls the race per NASCAR

No need to bring hate to anyones win, no matter who it is. @BubbaWallace works his a** off and deserves this win and the next ones to come https://t.co/HCw2JnwnnX

Wallace was asked if he empathized with Brown’s situation with their wins being overshadowed in some way.

“Brandon is a good guy. We ran into each other (recently), and both congratulated each other on our wins,” Wallace said. “The people inside of our four walls of this sport understand and get it and that’s what I need to wrap my head around … we know how tough it is to win a Cup race and there has been plenty of rain-shortened races, the darkness stuff.

“There’s been plenty of instances where those have happened, and teams have capitalized on it. The people that aren’t fans of yours and just going to continue to carry that to the grave that it was rigged, or we only won because it rained. All of the 40 drivers in the field knew it was going to rain, why didn’t they win?

Sorry Bubba , no rain in the forecast for Talladega this year 😂😂