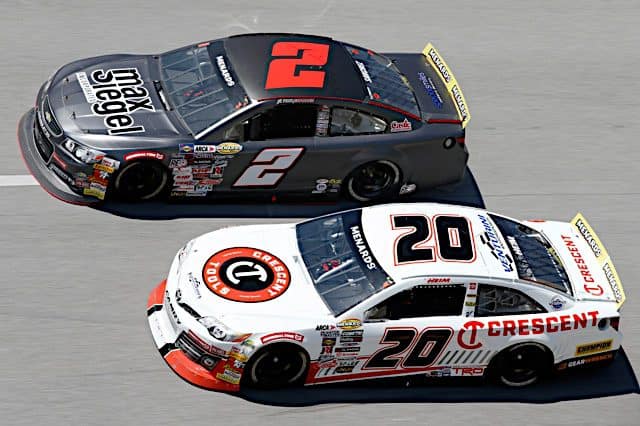 With 14 laps to go in its scheduled distance Saturday (April 23), ARCA Menards Series officials informed the drivers that the next flag would end the General Tire 200 at Talladega Superspeedway.

On lap 68, eight laps shy from the finish, leader Daniel Dye ignored his spotter and attempted to block Corey Heim. Instead, Dye spun from making contact with Heim, and series officials ended the race. Surprisingly, Nick Sanchez slipped through a window to win the race while Heim finished third.

The @RevRacin driver picks up his second ARCA Menards Series victory in the @GeneralTire 200 at @TALLADEGA 🏁 pic.twitter.com/qPFagCjIfh

That left Heim heavily displeased with the race officiating.

“You don’t really come to terms with the race finish,” he told FOX Sports 1 post-race .”I think it’s just a joke. Right before the end, my spotter told me this race would end under caution or whatever the next flag was. So, that’s just a joke. If they want to run the series like that, that’s one thing. My Crescent Tools Camry was great all day, we had speed, and we waited until the very end there. It ended early. I don’t know why we scheduled this race so close to the next race; it’s kind of ridiculous. So, we’ll see what happens.”

On Saturday, the competition made concerted efforts to beat the Venturini foursome but still could not really hold them back.

As part of that group, Heim powered his No. 20 toward the front and had a shot at the victory. With a push from his teammate Parker Chase, Heim briefly led the race. Yet late charges to the front from Rev Racing’s Sanchez and Rajah Caruth left them emerging as the team to beat with Caruth leading when the field received notice that the next flag would end the race.

Before Dye made his ill-fated block attempt, Heim led the bottom line, appearing on the verge of scoring his ninth ARCA win.

Instead, Heim finished third, leaving the 2.66-mile superspeedway upset with the race officiating and without the trophy.