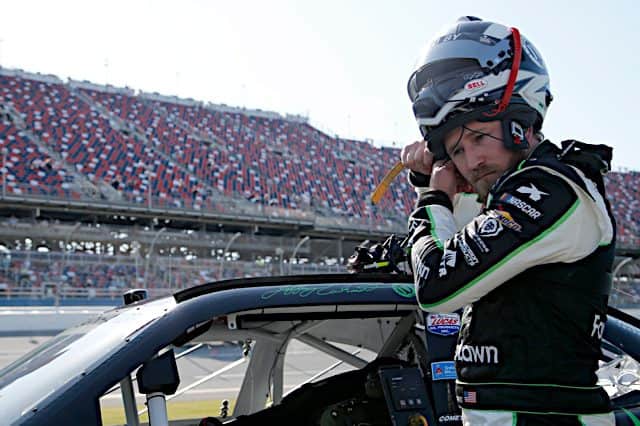 Jeffrey Earnhardt exited Talladega Superspeedway’s turn 4 in second place and seemed poised to have a run at leader Noah Gragson as the checkered flag waved in Saturday’s (April 23) Ag-Pro 300.

The No. 3 Xfinity Series entry for Richard Childress Racing didn’t quite get there, but the grandson of Dale Earnhardt and fourth-generation racer recorded a career-best finish after qualifying for his first-ever pole the afternoon before. While many a time the final lap has featured a run on the leader by the cars behind, Earnhardt had very little help with the field scattering across the tri-oval and couldn’t quite reach Gragson.

“Just [needed] a push there at the end,” Earnhardt told FOX Sports after the race. “Everyone spreads apart and it’s really hard to build a run by yourself without someone out the back. Unfortunately, our teammates got wiped out early, but man, I’m living the dream here. I’m so thankful to get this opportunity, so thankful to [sponsor] ForeverLawn to allow me to come do this.”

Earnhardt, driving the number made famous by his grandfather and marking five decades of an Earnhardt driving the No. 3 in NASCAR competition, was also crew chiefed by Larry McReynolds and kept clear of the numerous wrecks throughout the afternoon. McReynolds spent 45 races atop the pit box for Earnhardt Sr. between 1997 and 1998, guiding the Hall of Fame driver to his long-overdue Daytona 500 win in the latter season.

His two teammates in Austin Hill and Sheldon Creed, both fast all day, were taken out in a pair of crashes late in the running.

“Super pumped, […] all the fans, RCR for building this amazing racecar,” Earnhardt added. “We were fast all weekend long, we just fell a little short there. I hate it, but congrats to Noah, he’s good at plate races. Come up a little short, but hopefully this will lead to a lot more to come in the future and we’ll be able to come back and give them a run for their money. Just very thankful to even be here. I’ll forever be grateful for this opportunity.”

Earnhardt’s three previous top-10 efforts in the series were finishes of sixth, eighth and third, all in 2019 under the Toyota banner with Joe Gibbs Racing. The third-place finish came at Charlotte Motor Speedway at a time when Earnhardt appeared to be in position for success with top-tier equipment. But funding from primary sponsor iK9 ran dry and, midway through that year, he was back in the free agent pool looking for a job.

It’s been the story for the 32-year-old Earnhardt, racing since 2009 as sort of journeyman in NASCAR. His debut came in 2009 in the Xfinity Series, where he made starts for Curtis Key, followed by some Camping World Truck and Xfinity starts in 2010 and 2011 for Rick Ware Racing.

Earnhardt then made starts across multiple Xfinity teams, including Randy Hill Racing, Go Fas Racing and JD Motorsports, among other stables. In Cup, he made his debut with Go Fas Racing at Richmond Raceway in 2015 and made further starts in their No. 32, as well as for BK Racing, Circle Sport, StarCom Racing, Premium Motorsports and Gaunt Brothers Racing over the next several years. His most recent Cup effort was for now-defunct XCI Racing at Talladega in 2019.

The fourth-generation driver has made four other Xfinity starts in 2022, three for Sam Hunt Racing and one for Emerling-Gase Motorsports. His best finish came at Atlanta with Hunt, a 13th-place effort at the newly reconfigured venue.

I had fun hollering ” C’mon Earnhardt” at a black #3 at the end of a race on TV again!

Omg it is about time this man be noticed I love it now I can start watching again. He looks a little like his grandpa and his daddy