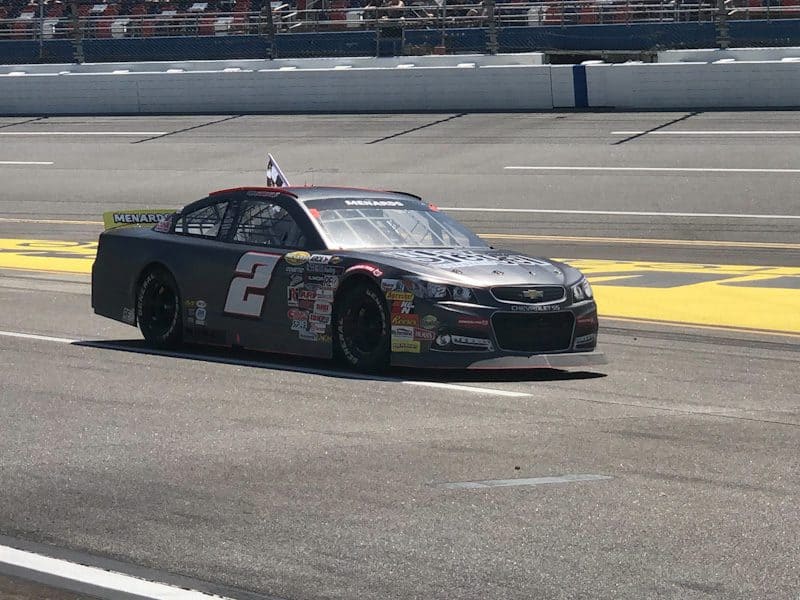 It was Father Time.

Due to TV time constraints on Saturday (April 23), ARCA Menards officials informed drivers the next flag would end the race following a lengthy red-flag period. Daniel Dye failed to block Corey Heim, Dye then spun, and Nick Sanchez threaded the needle through the middle to win the race at Talladega Superspeedway.

It’s Sanchez’s first win this year and the second of his ARCA career.

“They told me the last caution would end it so I was driving pretty aggressive, just trying to get to the front before someone wrecked,” Sanchez told FOX Sports 1 after his victory. “It was every man for himself right there and my Max Siegel-owned Chevrolet did great. Thank you to Max Siegel, NASCAR Drive for Diversity, Chevy, I’m frickin’ ecstatic.”

The @RevRacin driver picks up his second ARCA Menards Series victory in the @GeneralTire 200 at @TALLADEGA 🏁 pic.twitter.com/qPFagCjIfh

Heim’s Venturini Motorsports team entered this race with five straight ARCA superspeedway wins. Heim himself won the last three, including this race last year. Well-positioned to take the lead by leading the bottom line, Heim was displeased with the officiating after the event that caused an early ending.

Officials felt boxed in with the NASCAR Xfinity Series event needing to start on time after them. A rash of cautions forced the race to run long, but Heim didn’t like the call.

“You don’t really come to terms with the race finish,” he said post-race .”I think it’s just a joke. Right before the end, my spotter told me this race would end under caution or whatever the next flag was. So, that’s just a joke. If they want to run the series like that, that’s one thing. My Crescent Tools Camry was great all day, we had speed, and we waited until the very end there. It ended early. I don’t know why we scheduled this race so close to the next race; it’s kind of ridiculous. So, we’ll what happens.”

With both the ARCA and NASCAR Xfinity Series race scheduled to run on Saturday, and Talladega lacking lights, the time difference between the end of this race and Xfinity pre-race festivities was too tight. As a result, in the caution preceding the end of the race, series officials informed drivers of the change to the end-of-race procedures.

This event was marred by a few caution flags early on, then a lengthy clean-up following a massive multi-car crash which saw Scott Melton placed onto a stretcher as he entered the ambulance.

Richard Garvie gets airborne during a huge ARCA crash at Talladega. pic.twitter.com/BYKuARfnso

The Big One began when Richard Garvie hooked Toni Breidinger. Both drivers shared different views on the contact as the wreck ended both their days.

“I think we just got hooked in the tri-oval,” Breidinger told FS1 after she was successfully released from the infield care center. “I mean, I think it’s kind of sketchy there anyways and I think we all got stacked up a little bit. Part of it – wrong spot and wrong time.”

Breidinger left the track with a 24th-place finish as well as two totaled No. 25 Toyotas. She also wrecked her primary car during practice.

“The guys did a great job putting together the backup car and making it fast,” Breidinger added. “My spotter Tyler [Monn] did a great job guiding me up into the top 10. Up until that point, it was pretty solid. I think I could’ve done a better job on my part to hold myself there and hopefully would’ve stayed out of this incident.”

Garvie, though didn’t hesitate to place blame upon Breidinger.

“The No. 25 was lifting for about two laps,” he said. “We were on the radio saying, ‘She keeps lifting. She keeps lifting.’ She looked like she tried to get to the top. Then she goes around. I think we got some help from behind and then we were a passenger from that point. I think we should get a 10/10 for the acrobatics. She lifted and we got into her back. It just sucks for everybody. The car was terrible all day. We didn’t have a push, we couldn’t do anything, dropped like a stone. We’ll come back next year and try again.”

Melton suffered the most from the wreck. Track officials extricated him out of his No. 69 and he eventually was airlifted to a local hospital, diagnosed with a fractured left leg.

Ultimately, Sanchez left the 2.66-mile superspeedway with the victory. He became the first full-time ARCA driver to win this season.

After this chaotic race, ARCA drivers have a little break before their next scheduled event. Kansas Speedway will host ARCA for the Dutch Boy 150 on Saturday, May 14 at 2 p.m. ET with TV coverage provided by FOX Sports 1.