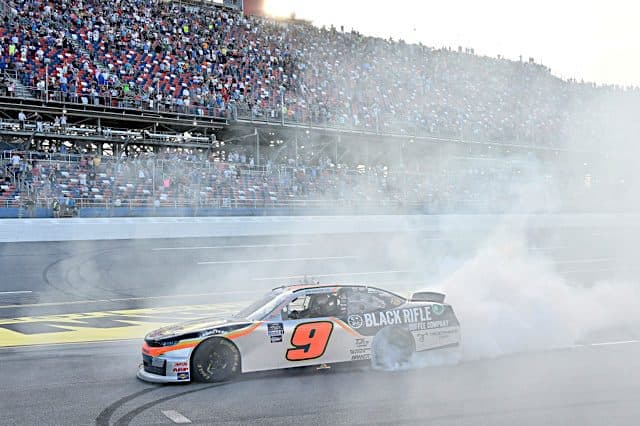 The NASCAR Xfinity Series Ag-Pro 300 at Talladega Superspeedway ended with a flurry of overtime wrecks. When the smoke finally cleared, Noah Gragson found himself in front on the final lap when a legendary last name appeared in the rear-view mirror.

The grandson of Dale Earnhardt Sr., Jeffrey, came within a car length of pulling off the upset before Gragson hung on to take the win. It’s the JR Motorsports driver’s second victory of the season and his first ever at Talladega.

“This JR Motorsports team never quits,” Gragson said after the win. “We have four really fast cars and Luke Lambert (crew chief) and this team called one hell of a race.”

To do it, Gragson had to fend off the late charge by Jeffrey, who earned the pole for the race in his grandfather’s famous No. 3. His crew chief was a familiar face – Larry McReynolds, now a FOX analyst and on top of the pit box for the first time since 2000. Earnhardt led some of the first stage, remained in the lead pack all day and emulated his late grandfather down the stretch, working his way up to second place after the race went through multiple overtime restarts.

“I’m living a dream here,” Earnhardt said. “We were fast all weekend long, and we just fell a little short there. I hate it… hopefully, this will lead to a lot more to come in the future, and we can come back here and give them a run for their money.”

Next up for the NASCAR Xfinity Series is a run-in with the Monster Mile at Dover. FOX Sports 1 will have coverage of the A-Game 200 on Saturday, April 30 starting at 1:30 p.m. ET.