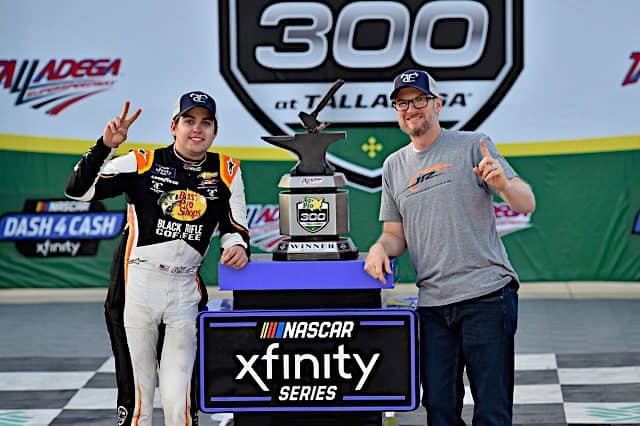 Noah Gragson took home the checkered flag in the Ag-Pro 300 at Talladega Superspeedway on Saturday (April 23), with Jeffrey Earnhardt, AJ Allmendinger, Ryan Sieg and Landon Cassill rounding out the top-five finishers. It may have taken a couple of overtimes, but Gragson’s win puts him in a very comfortable spot when it comes to playoff contention, as it’s his second on the season.

Justin Allgaier was in a position to win until a late-race calamity forced him to exit the track (more on that later). Larry McReynolds served as Earnhardtʻs crew chief for this race, his first time atop the pit box in 20 years, and he helped him pilot the No. 3 Chevrolet to the highest finish of Earnhardt’s career in one of the season’s biggest races.

As usual, ‘Dega delivered and provided one of the more exciting events we’ve had thus far this season. So without further ado, let’s jump in.

He did it for Dale. Jeffrey Earnhardt has never finished higher than third in his tenure as a NASCAR Xfinity Series driver. He’s had plenty of opportunities – 135 before Saturday, to be exact – but at ‘Dega, piloting a car inspired by his grandfather’s No. 3 Chevrolet, Earnhardt came in second after an Intimidator-like overtime charge for the leaders.

“At the end there, everyone just spreads out trying to pass whoever they can and that typically turns out pretty good for the guys a bit further back,” Earnhardt told reporters after the race. “I knew it was gonna break apart and I knew we had some help out back. I didn’t know if it was going to be enough to get us to second, but I knew we had a shot.”

Dale Senior was never truly happy with second, but for today, I think he’d be proud of Jeffrey in the homage of his old ride.

While Our Motorsports has seen some recent success this season, Saturday might have been a flag-marker for things to come from the newer Xfinity outfit. Anthony Alfredo, Brett Moffitt and Jeb Burton all piloted their cars to top-15 finishes, with Alfredo and Moffitt finishing inside the top 10. Not a bad day at the office for team owner Chris Our.

Checkered flag falls on a chaotic race at @TALLADEGA. Solid finishes all around! They knew we were here! #AgPro300 pic.twitter.com/FEhQhcN4Q9

I’m a firm believer that there are always more Losers at Talladega than Winners. Superspeedway racing is a war of attrition. You just have to worry about making it to the end, and then let the chips fall where they may. However, sometimes, the chips fall smack dab onto your front bumper.

Myatt Snider played the most literal game of grab-ass I’ve ever seen today when he collected Kaz Grala’s rear bumper mid-race. Snider hasn’t had the best of years, and today had to only add fuel to the fire.  As expected, Snider’s incident caused quite the stir on NASCAR Twitter, and thus, “Mr. Plow” became the joke of the day. (Snider maybe got the last laugh, though? His ninth-place finish was actually his second-best of the season).

But today’s biggest loser has to go to Justin Allgaier. Before the final overtime, Allgaier was in the lead. He had made a pit stop with about 45 to go, and under most circumstances, would have been within the fuel window, if only the race finished on time. ‘Dega had other plans, though, and on the final race to the green flag, Allgaier’s luck ran out — right along with his fuel tank. He pulled his car off the track and out of the way so NASCAR could continue the  overtime under green flag conditions (finally) and finished the race in 22nd.

That’s a hard pill to swallow when you were just competing for the win, a disappointment the veteran Xfinity Series driver will undoubtedly be looking to make up for next weekend at Dover International Speedway.

This week’s scheme is one I didn’t really think I’d like until I saw it on the track. Caesar Bacarella has not had an easy NASCAR career, with most of his starts coming on superspeedways. However, Alpha Prime Racing hooked him up with a sweet-looking ride on Saturday. I was trying to think of a better thing that this Lilly Finance scheme reminds me of, but all I could think about was Baskin-Robbins ice cream.

Is that a bad thing?

For my diet, yes. For my happiness? No. Ice cream is awesome. It’s a shame Bacarella got tangled up with Sheldon Creed late in the first overtime, which caused this tasty scheme to end up looking like this.

The Playoff picture saw some minimal change yet again on Saturday, as Noah Gragson has already won a race this season. Currently, Austin Hill, Ty Gibbs, Gragson, Allmendinger and Brandon Jones are all safe with victories according to the latest Jayski.com standings.

This week’s Fuel for Thought is going to stray away from the race-centered side of things. Instead, I want to take a second to talk about the at-home experience on the fan side of things. I’m a broke college student who likes things that go fast. I blow my money on the cheapest motorcycle parts I can buy and live off an immense supply of homemade tacos and ramen noodles. I say these things to make it known that, while reporting, I’m not attending each and every NASCAR race.

Therefore, I’m usually watching races just like the majority of the fans are — at home on TV. That’s where this week’s rub comes in. During an overtime caution lap, arguably the most exciting part of the race, FOX cut to a studio segment in which they spun some kind of wheel and showed no on-track action. I get that following around cars is boring and repetitive, but there are quite literally dozens of drivers and crew chiefs that can provide on-track insight to the strategies they’re going to try and use, or even the ones that didn’t work. I would rather listen to five straight minutes of team radio than watch another pointless studio segment ever again. Heck, I’d rather watch a minute or two of nothing but b-roll of fans than watching a pointless studio segment.

From what I can gather, most of the fans feel the same way. Talladega is something the NASCAR community as a whole looks forward to every year, for the most part. Fans want to see as much of the drivers and cars as possible. It’s one of the most consistently good races on the schedule, and it shouldn’t be filled with random studio breaks in the middle of an overtime restart.

We’re headed to Dover for a little date with Miles The Monster. The last time Xfinity was here, Austin Cindric took home the win. With Cindric out of the picture this year, the door is open for someone else to conquer this one-mile oval and secure their spot in the 2022 Xfinity Series Playoffs. That race will begin at 1:30 p.m. ET and will be aired on both Fox Sports 1 and the Motor Racing Network.

Two things, yes, AJ has a win & a solid points lead. But he needs playoff points & he missed an opportunity. Too bad he had to settle for the 100K consolation prize.

Secondly, Faux is famous for cutting to commercial during the final laps when the action is sure to heat up. I’m looking forward to their time being up, with no more Waltrip, & a lot less Alexander.